The cult of Barb: Why the Internet is obsessed with the "Stranger Things" doomed sidekick 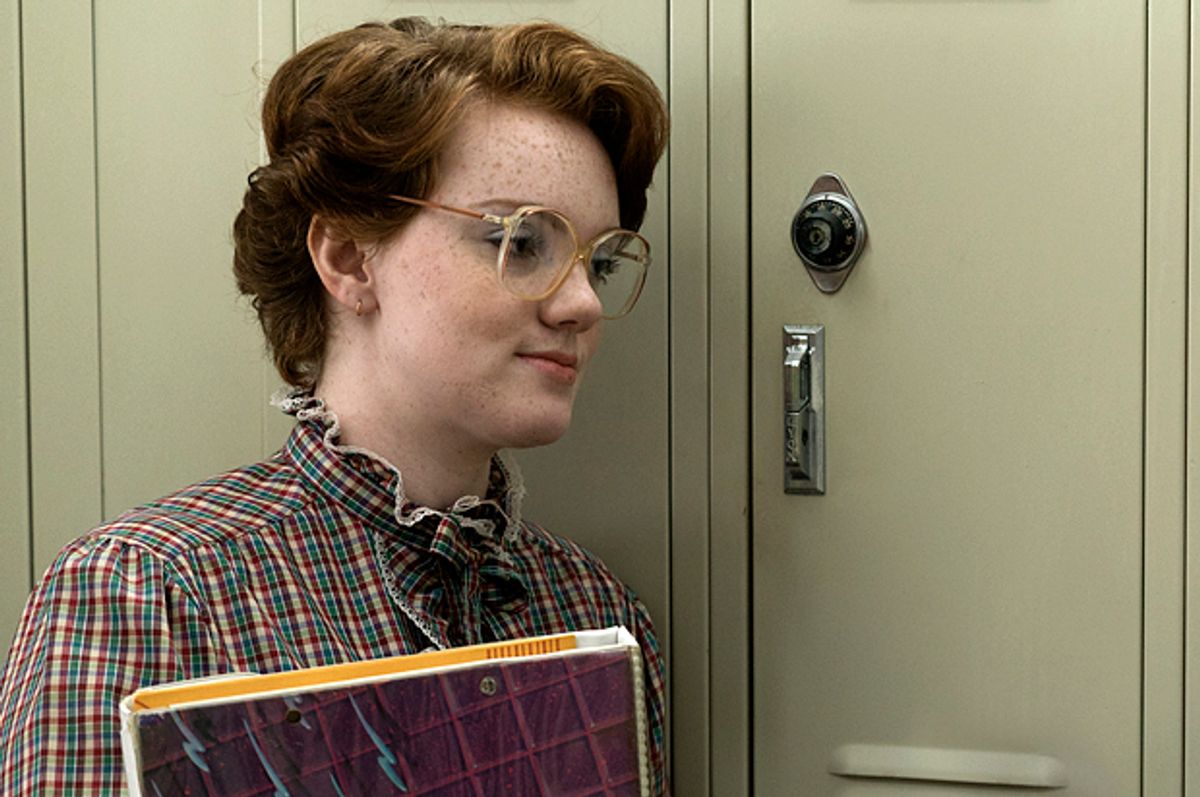 If the Internet constantly craves a new obsession, “Stranger Things” has proven the summer’s craze célèbre. No aspect of the sleeper Netflix hit, however, has been as fawned over as much as Barb (Shannon Purser), the bespectacled normcore oracle who serves as the best friend to Nancy Wheeler (Natalia Dyer), the obscure object of desire at their small-town high school. Complete with an endless supply of Lana Turner sweaters, Nancy is the sheltered, unattainable good girl who craves a bit of danger, and her BFF is the loyal sidekick who gets ditched in Nancy’s quest to live her teenage dreams. [Note: Massive spoilers ahead, so go ahead watch the series already.]

Unfortunately for Barb, she is not just left behind, but left for dead. In the show’s second episode, the two friends attend a party hosted by Steve Harrington (Joe Keery), the program’s Jake Ryan facsimile. Steve is a pretty boy jock but perhaps more soulful than he initially seems. While the two canoodle, Barb is served up as monster chow for the Demogorgon, a shadowy creature straight out of “Pan’s Labyrinth” who lives in the Upside Down. Unfortunately, viewers see Barb for only a handful of scenes before she meets her end.

To say that Barb has become a cult icon despite her limited screentime is a major understatement. The character (neé Barbara Holland) has inspired murals, GIFs, listicles, and odes to her fashion-forward style, awesome powers of friendship, and overall greatness. This is despite the fact that—as Decider’s Meghan O’Keefe pointed out—we know almost nothing about her at all. (She likes to wear oversize glasses and mom jeans?)

How does someone who is quite literally a throwaway character inspire that kind of intense adoration? Vulture’s Brian Moylan suggested it’s because a certain type of fan sees something of themselves in her, the kind of girl who doesn’t get invited to the prom and instead stays home to polish her rock collection. Like Daria Morgendorffer or Enid and Rebecca of Daniel Clowes’ “Ghost World,” disaffected loners on the outside of teen life looking in, Barb stands in for the outcasts and the misfits. She’s Liz Lemon attending a bird museum in Frankfurt. She’s Paris Geller re-reading “The Iliad” on Friday night. She’s Josie Grossie—and she always will be.

The fact that fans of “Stranger Things” have posted the most Barb-like photos of themselves from high school under the hashtag #WeAreAllBarb further underscores this idea: She is (somewhat unintentionally) a stand-in for the former band geek inside us. If the show is dripping with nostalgia for the 1980s—when horror maestros like John Carpenter and Stephen King ruled the decade and Chunk truffle-shuffled his way into America’s hearts—Barb inspires both remembrance and recognition. Really, who wasn’t that girl at some point?

But the quality that has made Barb such an effective cipher is what has frustrated so many about the show: She dies before she becomes a fully embodied character, one given the dimension and depth of those around her. As the Duffer brothers have stated in interviews, Barb was never supposed to become a meme. Her presence in “Stranger Things” serves to upend a trope common to slasher films of the era. Instead of Nancy, the “final girl” who gives into temptation by having sex with her beau, being punished for losing her virginity, it’s the show’s most chaste, level-headed character who is killed instead. Unlike Wes Craven’s horror satire “Scream,” death doesn’t follow the rules in the real world.

Because we know so little about her, we’re able to not only project our own histories onto Barb but also engage in the act of writing her story for her. Writer and performer Justin Sayre imagined entries from Barb’s diary in a series of tweets following the Netflix show’s premiere. “1/19/80 I know I was hesitant at first,” reads one post, “but these Boy’s corduroys are just more flattering.” Sayre writes in another, “9/5/82 God, we have fun in Marching Band.”

The project of giving Barb an internal life is reminiscent of Miranda July, the writer, director, and performance artist who staged a 2009 photoshoot of herself as a series of extras in popular films. Published in Vice magazine, July painstakingly recreates classic scenes from films like “Dog Day Afternoon” and “The Outsiders.” Inserting herself into Hitchcock’s “Vertigo,” July dresses as a woman carrying a bouquet of flowers. She is a mourner attending the funeral of Don Vito Corleone in “The Godfather,” a child going to school in “Kramer vs. Kramer,” and a poodle-skirted pink lady in “Grease.”

There’s a note accompanying the photo spread from a character named “Sandy,” who appears to be unrelated to the scenes depicted, but her brief letter is crucial to the project’s ethos. “It seems like I am forever stuck in the background, watching other people say and do all the things I feel inside,” Sandy writes. “One day I’m gonna surprise everyone with my talents. They will be laughing and crying and texting me so often that I will be annoyed.”

It’s the Sandys and the Barbs of the world who too rarely get to be the center of their own narratives. For instance, what would “Sixteen Candles” have been like if it were told from the perspective of Joan Cusack’s character? A classmate of the Audrey Hepburn-esque Samantha (Molly Ringwald), Geek Girl #1—who doesn’t even get a name, mind you—exists on the edge of the action. When Ted (Anthony Michael Hall) lavishes unwanted attention on Sam during their bus ride to school, Geek Girl #1 is seated next to them, sighing through her scoliosis brace. If only she were lucky to have someone be infatuated with her, even someone she can’t stand.

By rewriting the narrative around Barb, fans of “Stranger Things” have given her a kind of second life that the show denied her. Throughout the program’s freshman season, viewers tweeted their outrage at how her character was treated. While the ragtag friends of Will Byers frantically searched for their missing buddy, who was presumed dead, no one, other than Nancy, seemed to care much about Barb. Many, like myself, wondered: “Doesn’t she have a family that misses her? Is anyone else looking for Barb?”

Fans will reportedly get #JusticeForBarb next season. According to the Duffers, the sophomore effort will explore the aftermath of the tragic events that occurred the previous season, including how Barb’s family took the news of her death. In a YouTube video, comedian Cole Escola (“Difficult People”) imagines the scene: Her mother answering the phone in a bathrobe with a towel around her head, dimly lit by a single lampshade. “What?” she yells into the receiver, both shocked and slightly annoyed. Whether that closure was intended all along or is in response to fan outcry is anyone’s guess, but it’s a kind of vindication rarely afforded to the wallflowers and high school mineral hoarders.

In becoming a symbol for the second fiddle in all of us, Barb found her redemption—moving from the background to the limelight. Perhaps Barb always was a star. It just took the Internet to recognize it.