"The Tick" vs. pilot season: Can Amazon bring back the big blue superhero?

The third time could be the charm for “The Tick,” but if it is, is Amazon the right home for it? 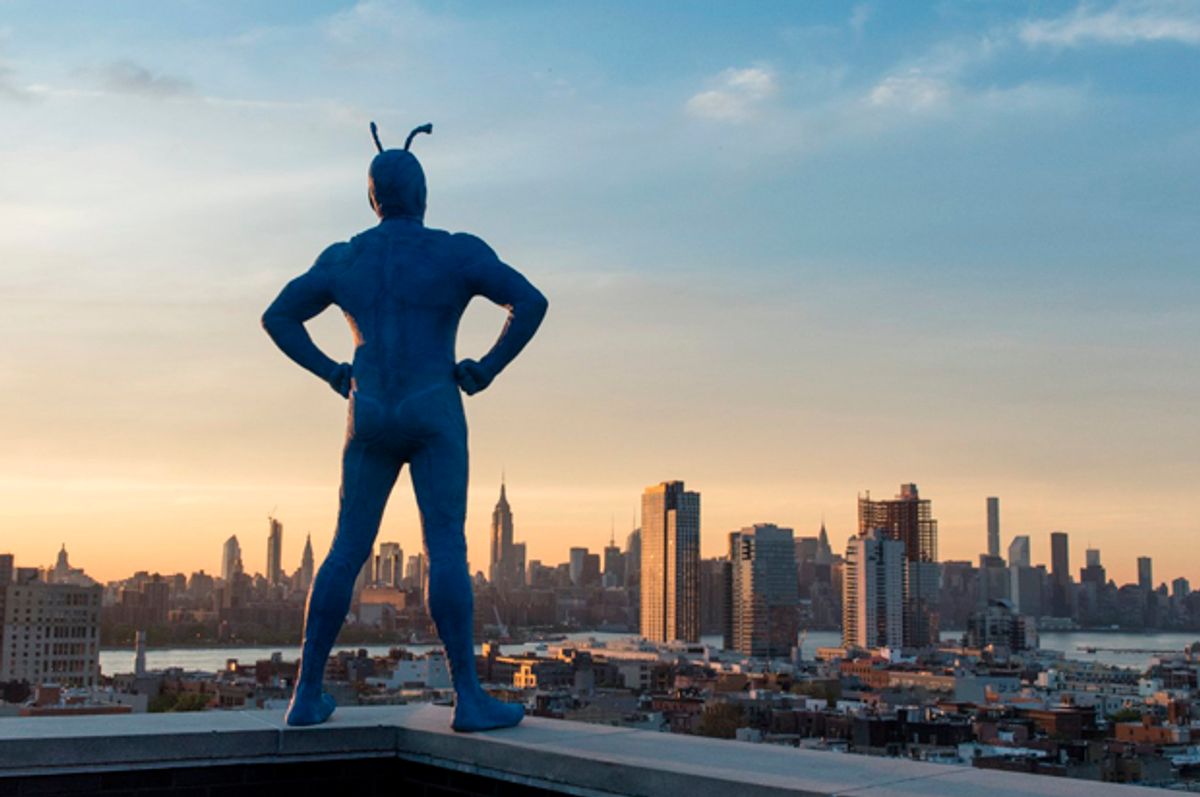 Last week Amazon served up another round of its pilot season releases which, in typical fashion, includes at least one selection all but guaranteed to be picked up. That would be “I Love Dick,” the latest from “Transparent” creator Jill Soloway.

The second is “The Tick.”

To some, that second title means absolutely nothing. To others, the fact that Amazon is giving the big blue guy another shot at a series treatment is a reason to get very, very excited. Then worried. And excited again! So many feels must be running through the quivering gelatinous mass inside the average “Tick” fan’s skull, even before he or she even watches Amazon’s pilot.

Skipping to the meat of the matter: Yes, naughty spawn, watch it. Then rate it. Then pray that other network-development executives see the potential in “The Tick” that the title’s truest believers do because this is does not feel like an Amazon show.

Let’s back up a bit and examine the Amazon pilot season concept. When the company unveiled its pilot season process in 2013, the initial pitch was that the public would have a say in choosing which pilots would be made into series. Thus, several times a year, Amazon makes a number of half-hour or hour-long pilots available for any user to view and rate.

Victors are selected based on a combination of data, including numbers of streams, user feedback and ratings.

Amazon has never been crystal clear on its determination method. But had this alleged democratization of original-content selection been a total success, it would have upended the industry’s standard production process. Then again, if users had a significant say in the process, “Transparent” might not have made it beyond the pilot stage. At the end of its evaluation period in 2014, its pilot had the fewest user reviews and one of the lowest viewer ratings of its class.

Luckily Amazon Studios executives moved forward with “Transparent,” which has helped provide more visibility for transgender roles in television and film, and it went on to win five Emmys.

In other cases, such as when Amazon announced it would produce a series by Woody Allen (called “Crisis in Six Scenes,” bowing on Sept. 30), crowdsourcing was not used at all. (When Allen agrees to do a series for a venue, it gets done! Regardless of the media controversy surrounding him!)

The truth of the matter is, Amazon Studios executives already have a fairly solid idea of the shows they intend to make. They just want to suss out whether the public will watch.

This leads back to The Tick, protector of the City and the central hero of a cult comic-book series created by Ben Edlund in 1986. The Tick has a devoted pool of fans who have been dying to see him introduced to a new generation and who will be relieved to know that Edlund wrote the Amazon pilot, which was directed by veteran cinematographer Wally Pfister.

Given the ongoing obsession with superheroes, now would seem to be the perfect time for that to happen. Amazon has no comic-book titles in its stable of originals, unlike its main competitor, Netflix.  Put the two together and, on paper, it looks like kismet — until one factors in the importance of branding.

Edlund originally drew “The Tick” as an absurdist comic-book spoof, centered on a nigh-invulnerable crime fighter composed of goodness and brawn and very little brain. Compensating for The Tick’s lack of intelligence was his sidekick, Arthur, a pudgy former accountant in a moth costume.

Most of fans became aware of his existence in 1994, when The Tick got his own Saturday morning cartoon on Fox. There The Tick was joined by assortment of other deranged, G-rated heroes and criminals. Villains had names such as Chairface Chippendale, The Deadly Bulb and The Evil Midnight Bomber What Bombs at Midnight.

The animated series ran for three seasons before Fox canned it, but Comedy Central aired repeats afterward, seeding a fan base for the eventual 2001 live-action version starring Patrick Warburton – an example of perfect casting. That ran for an oh-so-glorious nine episodes.

See, The Tick’s biggest obstacle is the very thing that makes it so beloved by its hard-core boosters: It is gleefully, unapologetically absurd from top to bottom. This is a time of deadly serious superheroes, figures who not only know how to throw a punch but serve as symbolic warriors against greater cultural evils.

The titular heroine of “Marvel’s Jessica Jones” is powered by her trauma and stands against gender oppression and victimization. The upcoming chapter, “Marvel’s Luke Cage,” features an African-American man who is bulletproof. Not much to explain there.

The Tick, in contrast, is all derring-do. His entire vocabulary consists of motivational speeches and, most important, he has no origin story. Where he came from and what he’s made of is the only mystery to this shallow figure with a heart of gold.

The latest Tick is played by British character actor Peter Serafinowicz, who is of slighter build than Warburton or Edlund’s original drawing, but has a similarly amazing voice. (Warburton, for his part, has a producer credit.) Serafinowicz’s muscle mass matters less than the pilot’s most important shift, which is away from The Tick’s sunny, crusading perspective to that of Arthur, portrayed with a winsome sensitivity by Griffin Newman.

In the comics, Arthur is easily frightened and reluctant to confront danger. (His battle cry is “Not in the face! Not in the face!”) Hence, the latest “Tick” provides Arthur’s origin story, hinging his sheepishness upon that reliable comic-book chestnut, significant childhood trauma. In this case, it is inflicted upon Arthur by the Tick Universe’s Big Bad, a very cranky villain known as The Terror (Jackie Earle Haley, shown in a very brief scene). This also adds a possible "Mr. Robot" element to the plot: Since Arthur is a bit off-kilter, his perspective of events might not be altogether reliable.

Adding a touch of darkness to the City’s streets is not completely unwise, considering how nearly impossible it is to get audiences to buy into absurdity in a TV series. Granted, Edlund has learned how to finesse the absurd into the more straightlaced series he has worked on since “The Tick,” notably The CW’s “Supernatural,” for which he served as a writer and executive producer for seven years.

Nevertheless, it’s odd to see such a cheerful title force its singular eccentricity into the conventional tortured superhero mold. Shifting away from cartoon goofiness could be the key to “The Tick” getting a full season. But if that robs the story of its reckless, juvenile spirit, will it be worth it?

This musing could be for nothing, of course: Amazon may not move forward with “The Tick” when all is said and done. There’s a good chance a number of viewers don't know what to make of this thing.

Even if it Amazon does give it the green light, there’s the question of where a show like this would fit in the Prime streaming brand.

Netflix has a large stable of originals that includes period pieces, political thrillers, a prison dramedy, comic-book titles and hilarious, boundary-busting comedies such as “Lady Dynamite” and “BoJack Horseman.”

Amazon, meanwhile, cultivates prestige. Allen is an example of its weakness for big-name talent, both in front of the camera and behind it. Recently executives urged critics to think of its comedies as being less about punch lines and more as simply "half hours." Dramas are now "hours."

This is logical when one looks at the most significant titles in Amazon’s half-hour stable, “Transparent” and “Mozart in the Jungle.” Great shows, and neither is a knee-slapper. Amazon also has a half-hour “traumedy” on the way from Tig Notaro, “One Mississippi,” exploring family relationships and grief. If Netflix is the streaming-service version of HBO, Amazon would be more akin to an AMC/Sundance hybrid.

How would “The Tick” fit in here, anyway? The answer could be that it would fare better on a different channel. When Amazon decided to pass on “Those Who Can’t,” Turner swooped in and gave it a home on truTV. One can easily see “The Tick” at home on sister channel TBS.

Any place is better than no place at all, if one cares about the title. But who knows? One of Amazon’s mandates is to defy stagnancy. Perhaps adding a bizarre comic-book title will be its way of veering left while everyone else is going right. Maybe it would see “The Tick” as a challenge to viewers, in a medium that may be nearing peak comic-book saturation.

The best thing to do at this point is watch and try to not overthink it. As The Tick himself once said on the matter of guessing about one’s destiny, “You don’t eat crackers in the bed of your future, or you get all . . . scratchy.”