U.S. on both sides as Turkey intervenes in Syria to fight ISIS and Kurds

The war in Syria grows even more complex as the U.S. sides both with and against the Kurdish rebels fighting ISIS 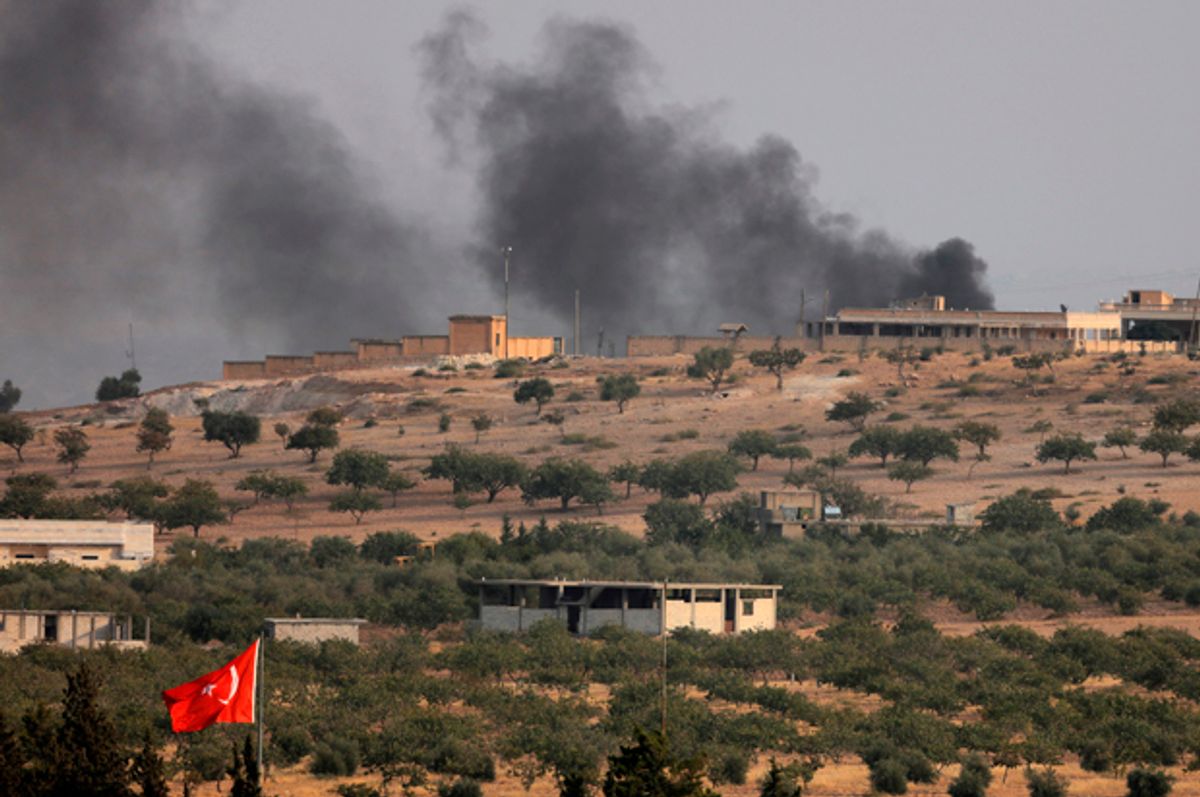 Smoke rises from the Syrian border town of Jarablus as it is pictured from the Turkish town of Karkamis, Turkey, August 24, 2016. (Reuters/Umit Bektas)
--

The war in Syria has become even more complex.

Turkey launched a military intervention in Syria on Wednesday, sending tanks across the border and launching air strikes.

Turkish-backed rebels reportedly captured the town of Jarablus, in northern Syria, from ISIS. U.S.-backed Kurdish rebels, however, had already been fighting for months to retake the town from the self-declared Islamic State.

Vice President Joe Biden made it clear that the U.S. supports Turkey's new military incursion. Speaking at a press conference during a visit in the Turkish capital Ankara, Biden told Kurdish rebels to retreat, warning them "they cannot — will not — under any circumstance get American support if they do not keep that commitment."

The U.S. is effectively on both sides in the conflict. It backs Turkey, which is fighting Kurdish rebels, yet it also supports the Kurdish rebels, which have been one of the most effective forces battling ISIS in Syria.

Media reporting on the story has been somewhat misleading. Headlines of major news outlets described Turkey's incursion as a fight against ISIS, leaving out the fact that Turkey's offensive is just as much of an attack on the very same Kurdish rebels defeating the so-called Islamic State.

The New York Times titled its story "Turkish Military Begins Major Offensive Into Syria in Fight Against ISIS." It later noted, however, that Turkey's intervention "also seemed as much about containing the territorial ambitions of Syrian Kurdish militias, which Turkey sees as its primary enemy in the conflict and which were poised to move against Jarabulus."

CNN's report carried the headline "Turkey sends tanks into Syria to battle ISIS," but it later pointed out, citing Turkish President Recep Tayyip Erdogan, that "Turkey's incursion into Syrian territory is part of a larger effort to battle not only ISIS but also Kurdish fighters in northern Syria that Ankara opposes."

The Syrian government, which has welcomed Russian and Iranian military intervention, condemned the Turkish incursion as an act of "aggression" and "blatant violation" of its sovereignty.

The U.S. on the other hand, which backs rebels trying to overthrow the government of President Bashar al-Assad, supported Turkey's military offensive — thereby opposing the Kurdish rebels it has backed for months.

In early August, U.S.-backed Kurdish forces liberated the border town of Manbij from ISIS. Just after ISIS was defeated, nevertheless, Turkey warned the Kurdish rebels that they must retreat from the area. On Monday, Aug. 22, the Turkish military fired artillery 20 times at them.

For months the People's Protection Units, or YPG, a militia primarily of Kurdish Syrians that's aligned with the leftist Democratic Union Party, or PYD, had been fighting ISIS in an attempt to seize Jarablus. Last year President Erdogan had reportedly declared a red line, warning the Kurdish rebels it would attack if they took the town over.

The U.S. support for Turkey's new military intervention might appear to be a sudden volte-face, but Washington has played a kind of double game in the catastrophic war, which has killed hundreds of thousands of people, displaced more than half of Syria's population and left much of the country in ruin.

Most of the Kurdish fighters are leftist, feminist and secular, whereas the bulk of the opposition to the Syrian regime is at this point Islamist. Both of these U.S.-backed forces have, at times, fought each other.

The U.S. Department of Defense opposes supporting antigovernment rebels in Aleppo because many are affiliated with Syria's al-Qaeda affiliate and other extremist groups. The CIA, on the other hand, supports these Islamist rebels, arguing, as The Daily Beast put it, that "alliances of convenience in the face of a mounting Russian-led offensive have created marriages of battlefield necessity, not ideology."

This is the same strategy that led the U.S. in the 1980s to arm the mujahideen, Islamist extremist groups in Afghanistan, in their fight against the Soviet Union. The mujahideen are the predecessors of al-Qaeda, the Taliban and other extremist groups that have terrorized the Middle East and South Asia for decades.

Like the U.S., Turkey has played its own double game in Syria, using similar Cold War-style tactics. A former ISIS militant who managed to escape told Newsweek in 2014 that the extremist group was in "full cooperation" with Ankara. “ISIS and Turkey cooperate together on the ground on the basis that they have a common enemy to destroy, the Kurds,” he said.

Throughout the war in Syria, Turkey — a NATO member and important Western ally — has given Islamist extremists from around the world free rein to cross its border into Syria. In July, French military intelligence estimated that 100 people per week were crossing the Turkish border into Syria to join ISIS.

For years the Turkish government has armed Islamist rebels dedicated to overthrowing the Syrian government. In May the increasingly authoritarian President Erdogan imprisoned prominent journalists for revealing that Turkey was directly arming Islamist groups in Syria.

A former U.S. ambassador to Turkey, Francis Ricciardone, had claimed in 2014 that Turkey was supporting Syrian al-Qaeda affiliate Jabhat al-Nusra. While the U.S. government considers al-Nusra a terrorist organization, American allies Saudi Arabia and Qatar have been accused of aiding the extremist group.

In recent months ISIS has begun carrying out suicide attacks inside Turkey, likely because President Erodgan has allowed the U.S. to use Turkey's Incirlik military base to launch air strikes against the so-called Islamic State. Hundreds of civilians in Turkey have been killed in several suicide bombings for which ISIS has taken responsibility.

This has left Turkey in two internal and external battles: one against Kurds and another against ISIS. President Erdogan has made it clear that he deems the Kurds to be a greater threat. Some Kurdish militants have carried out attacks on civilians inside Turkey, but the right-wing Turkish government considers all Kurdish independence fighters to be terrorists.

In the past several months, President Erdogan has waged a brutal crackdown on Kurdish groups inside Turkey, which has left hundreds dead and displaced hundreds of thousands of people. The U.N. has harshly criticized the Turkish military's clampdown and cited reports that Turkey is intentionally targeting and killing Kurdish civilians with brutal tactics. Some Kurdish-majority areas on Turkey's southern border look like war-torn parts of Syria, with the fighting reducing parts of cities to rubble.

Some Kurds are calling the U.S. support for Turkey's new military intervention in Syria another act of "betrayal." The U.S. has a long history of temporarily supporting and then later turning its back on the Kurds.

In the 1970s, then-National Security Advisor Henry Kissinger urged Iraqi Kurds to rebel against Saddam Hussein. The U.S. pledged to support the Kurds but then abandoned them, leaving them to be slaughtered. (The U.S. also went on to support both Iraq and Iran in the Iran-Iraq war in the 1980s.)

After the Gulf War, then-President George H. W. Bush once again encouraged the Kurds to rise up, but failed to support them. His son, President George W. Bush, subsequently went on to dash Kurdish hopes for an independent state after an illegal U.S. invasion and occupation that destroyed Iraq's government and destabilized the country.

As the war in Syria drags on, the U.S. is once again courting both sides.