Is the NBA ready for another gay player?

The NBA has a strong nondiscrimination policy and stood up to HB 2. And Derrick Gordon says he couldn't get a shot 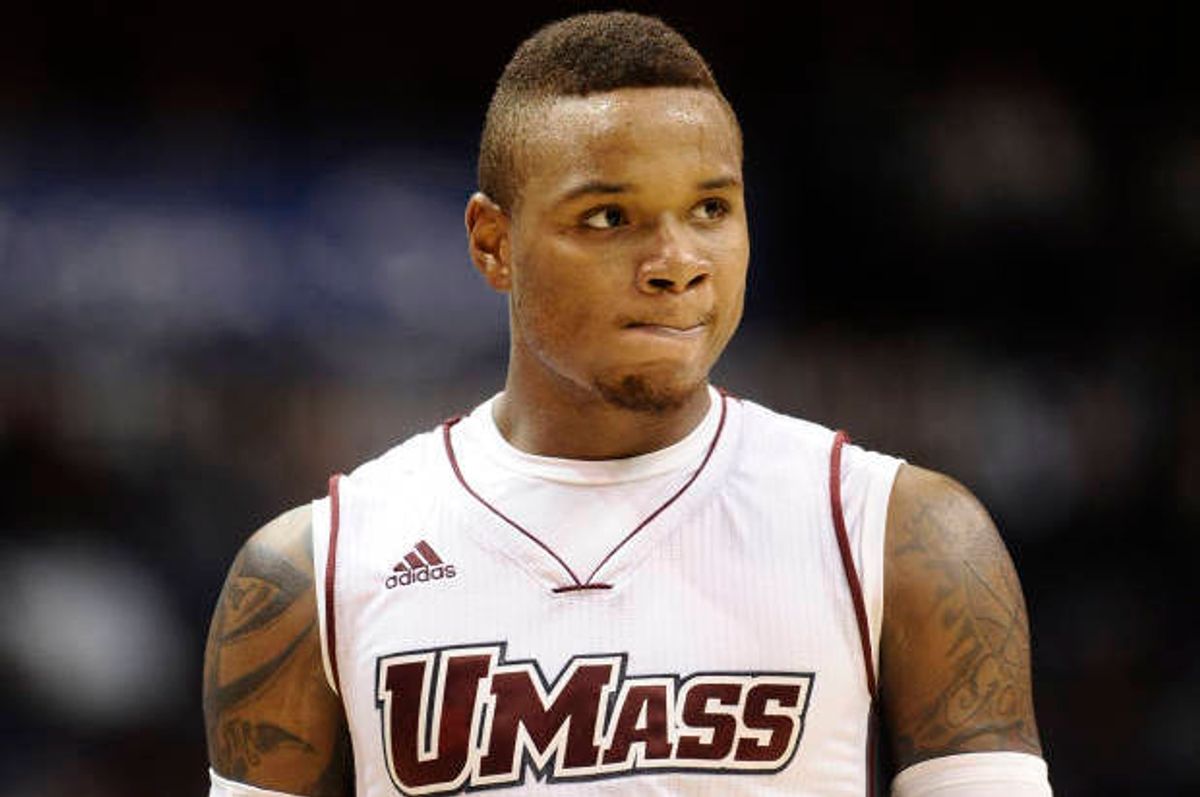 This year’s Olympic Games set a record for the number of out athletes, with 51 LGBT Olympians competing for medals. These included British diver Tom Daley, Tongan swimmer Amini Fonua and a whopping four members of the USA women’s basketball team: Brittney Griner, Seimone Augustus, Angel McCoughtry and Elena Delle Donne. Donne, who plays for the WNBA’s Chicago Sky, recently came out in Vogue interview and announced she’s engaged to be married.

But it hasn't escaped notice that there's wasn’t a single out U.S. male in this year’s Games.

At a moment of apparent progress in professional sports, some men’s sports appear to be light-years behind. Former college basketball star Derrick Gordon told Gannett New Jersey last week that his NBA hopes were stalled early on because he's gay. Gordon, who came out in 2014 during his sophomore season at University of Massachusetts Amherst, became the first openly gay player in NCAA Division I basketball history. The shooting guard reached the March Madness tournament as a member of three different teams, including Seton Hall and Western Kentucky — an achievement that was a first in the sport.

Gordon has not been as lucky in breaking into the big leagues. Thus far the 24-year-old has failed to be picked up in the NBA draft: He didn’t even earn a single workout with any NBA team — and he believes homophobia is to blame. “I didn’t get a fair shot to show what I could do,” Gordon told Gannett. “It was without a doubt because of the fact that I’m gay. I was heartbroken.”

In some respects, it shouldn’t be a surprise that Gordon hasn't been given a fighting chance in the NBA. According to many reports, Gordon’s play could be best described as solid, if unremarkable. Gannett has described him flatteringly as a “sixth-man extraordinaire” and the “clear locker-room leader” for the Seton Hall Pirates, where he finished his college career. “He averaged 8.0 points and was one of the Big East’s top perimeter defenders,” the news outlet wrote. With Gordon on the team, the Pirates reached the tournament as a No. 6 seed, its first such bid in a decade.

OutSports, the Internet’s largest hub for LGBT sporting news, is less sunny about his prospects. “His college statistics simply didn’t put him on the draft boards of any NBA teams,” Cyd Zeigler wrote. “Gordon, whether he were openly gay, closeted or straight, is exactly where virtually everyone thought he would be.”

Pro basketball teams, though, are frequently in need of players like Gordon, strong defensive players to help round out the roster as Jason Collins did.

Collins was the kind of player that one might describe as a journeyman. A former player for the Boston Celtics, Atlanta Hawks and Minnesota Timberwolves, he played 13 years in the NBA before retiring in 2014. His career, in which he averaged just 3.6 points per game, would have likely been forgotten altogether if not for his groundbreaking coming out in 2013. By publicly discussing his sexuality in an interview with Sports Illustrated, he became the first openly gay player in the league’s history. (John Amaechi, a former player for the Orlando Magic and Utah Jazz, came out after his 2003 retirement.)

The thing that is extraordinary about Collins is that he is, by all accounts, a fairly ordinary player. After remaining unsigned during the first half of the 2013-2014 season, he was picked up for a brief contract with the New Jersey Nets. Although the drafting of openly gay football player Michael Sam by the St. Louis Rams in 2014 was branded as a “distraction” and that generated a media circus, the interest in Collins quickly died after his first week with the Nets. His life on the court went back to business as usual.

What happened next, however, was just as quiet: Collins was not tapped at all the following season. After all, he was 35 and nearing the end of his career. At that point, the perceived risk of dividing a locker room by adding a gay teammate to the mix may have outweighed the reward.

In 2013 Collins likely felt he could come out because he was closing in on the final chapter of his on-court career and he had less to lose by becoming a poster boy for gay athletes in pro sports.

Gordon, like Sam before him, fell on the opposite end of the spectrum. A college athlete is a player that a team invests millions of dollars in, as well as years of its internal resources. If being gay is a handicap for an aging athlete who has already seen his best days as a player, it’s an even bigger one for an NBA hopeful.

In the case of Gordon, it’s not just that no NBA team wanted him. No team wanted him at all. After being passed up in the draft, Gordon appeared at July’s Las Vegas combines, the yearly stop for college players who hope to play in the NBA’s D Leagues or even be picked up somewhere abroad. The fact that not a single team was willing to give him a shot looks like a red flag.

“People understand him not getting drafted or signed to an NBA team after the draft,” wrote OutSports. “But not a single workout? Not even interest in working him out? … Gordon should be playing professional basketball somewhere.”

This is a major disappointment since the league has attempted to pave the way for the next Jason Collins. In 2011, the NBA instituted a set of nondiscrimination policies to help fight anti-gay harassment in the sport. Its policies prohibit the use of homophobic slurs on the courts and in locker rooms, with players who violate those guidelines slapped with a fine of $50,000.

Recently the NBA fought North Carolina over its House bill 2, a bill passed by the state legislature in March that effectively forced transgender people in the state to use the public restroom that corresponds with the sex they were assigned at birth. Adam Silver, the commissioner of the league, threatened to move the NBA All-Star Game, which had been scheduled to be held next year in Charlotte, if the law were not amended. He called HB2 “problematic” for a league that attempts to be inclusive to players and fans.

After months of failed negotiations, Silver announced in July that the game will find another home, an estimated $100 million blow to the Tar Heel State.

If the league’s executives have hoped to lead a sea change when it comes to LGBT inclusion, the rest of the organization has yet to follow. Although both Jason Collins and former Houston Rockets power forward Charles Barkley have stressed that there are a number of gay players in the NBA, none of the league’s 450 players have come out since Collins hung up his shoes.

Sue Bird, an Olympian who plays for the WNBA’s Seattle Storm, told USA Today that many might fear reliving what happened to Collins or Sam, who briefly played in the Canadian Football League after being let go by the Dallas Cowboys.

“It’s more about stigmas than anything else, and I think with those stigmas you have people who are going to be judged," Bird said.

Her teammate, Diana Taurasi, agreed that the subject of homosexuality remains “taboo” in the NBA. “It’s something that I feel like a lot of those guys think is a weakness, and they look down upon it,” she said. “That’s a lot of upbringing. A lot of that is religion, so I think once they get past those things, maybe in the future.”

But for now, players like Derrick Gordon — who is currently training to be a firefighter — are forced to pursue other dreams. It might be 2016, but the NBA is still waiting to catch up.