Rx robber barons: The disgusting EpiPen price hike is everything that's wrong with the pharmaceutical industry and politics

Mylan raised the price of EpiPens for 1 reason — it could. Meanwhile, the company is dodging U.S. corporate taxes 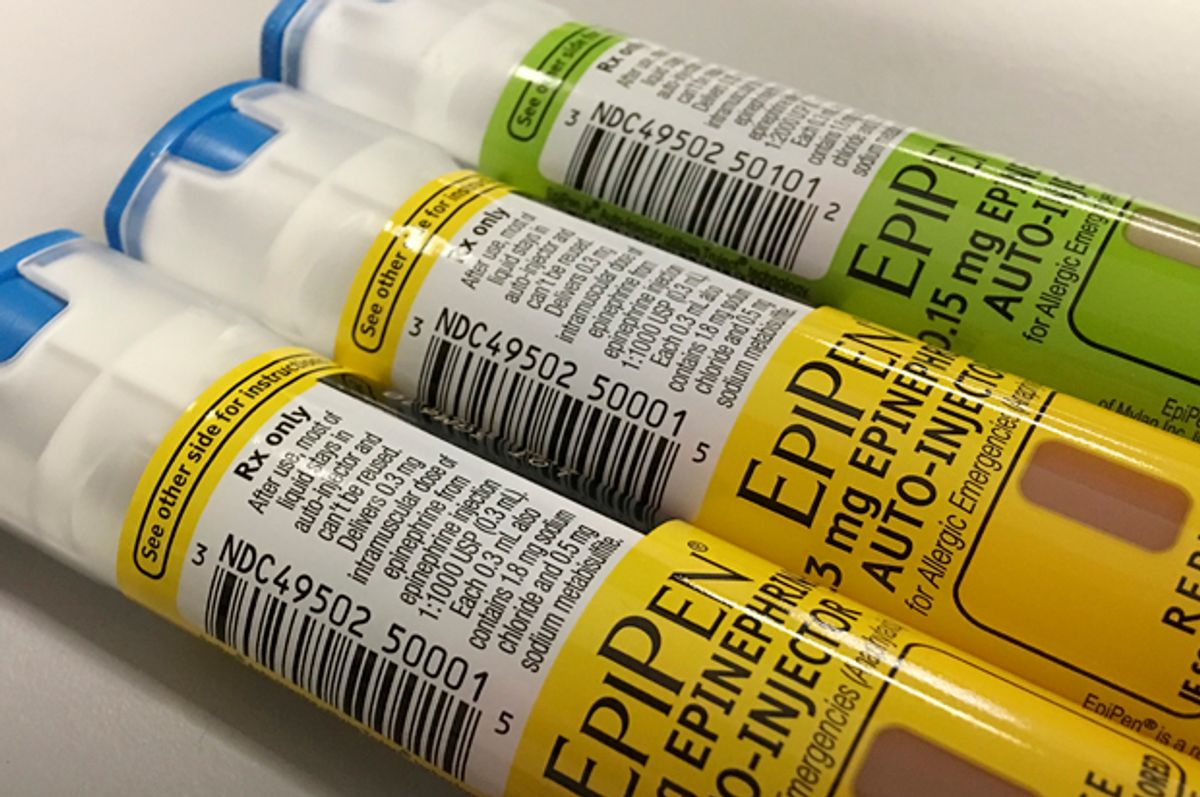 It would have been easy to miss the EpiPen story this week, drowned out as it almost was by the latest rounds of “What did the Clintons do now” and “Is Donald Trump really pivoting?” But it is an important story for a variety of reasons, including (but not limited to) what it says about corporate tax loopholes, the robber barons of the pharmaceutical industry, and an absurd and ungainly health care system that so often puts profits and share prices ahead of the health of American citizens.

First, the basics. EpiPens are a delivery system for epinephrine, or adrenaline. They are used to treat anaphylaxis, a (thankfully rare) allergic reaction that causes a person’s airways to swell shut, resulting in death by suffocation. To prevent this from happening, a victim needs an injection very quickly after the allergic reaction sets in. (The Secret Service detail of George H.W. Bush allegedly used to carry some form of injectable adrenaline because the former president was highly allergic to bee stings and at risk of anaphylaxis if stung.)

EpiPens are easy to use, but because epinephrine degrades quickly, unused pens need to be replaced regularly by consumers who would prefer to not suffer a choking, horrible and utterly preventable death because a bee got mad during a family picnic. The cost was at least tolerable for most consumers when a two-pack of the injectors cost around $100 in 2007.

This week NBC News reported that Mylan, the company that makes EpiPens, has jacked up the price of a two-pack around 450 percent after adjusting for inflation, so that they now cost around $600. That is a lot of money for middle-class Americans, especially if their insurance plan won’t cover the cost (as some don’t) or they have a large deductible, as so many people do. Which means more people will carry around degraded epinephrine that won’t fully work, or go without it altogether, putting their lives at risk because there isn’t an alternative to a drug delivery system that has been in use since 1977.

Why did Mylan jack up the price? Because it could. No one else seems to have developed a delivery system like the EpiPen. Patients can still get epinephrine through other delivery systems like syringes, but those require some training to pull the correct amount of a drug from a vial and inject it into a victim. Not something you really want to leave up to your kid’s teenage camp counselor.

An Israeli drug company named Teva did try to introduce a generic EpiPen alternative to the American market. But this past March the Food and Drug Administration announced it had found flaws in Teva’s version of the EpiPen and sent the company back to the drawing board. Now the generic will not be available in the U.S. until sometime in 2017 at the earliest.

While Mylan was jacking up the price of the pens over the last nine years, making them nearly unaffordable for many patients, the company’s CEO, Heather Bresch, saw her total compensation package go from around $2.5 million when she was the company president to just shy of $19 million in 2015. Granted, that number includes a pile of stock and stock options while her base salary was “only” $1.3 million. Still, that’s quite a nice nut to take home. The company board must be very grateful that the stock price has more than tripled under Bresch’s leadership.

Bresch made a significant move a couple of years ago to help the company’s profits by guiding it through a corporate inversion. That meant the company withdrew its United States corporation and re-incorporated in the Netherlands, even while its physical plant, all its employees and executives, stayed in West Virginia. That saved the company paying its corporate tax rate of somewhere between 16 and 23 percent, even while it still takes full advantage of its location in the United States and all the infrastructure the country puts around it so it can flourish.

Mylan even sought the protection of the Federal Trade Commission when it was trying to fend off a hostile takeover from Teva, the same Israeli company that was trying to compete with it in the EpiPen market.

So to sum up, an American company has found a way to get out of paying taxes while tripling its stock price for shareholders, but still uses taxpayer-funded services and entities built and maintained by the state and federal governments of the U.S. to save its bacon from a foreign company and flourish in one of the poorest states in the country so Heather Bresch can cruise around Morgantown in what I’m sure is a very nice luxury car.

There is so much wrong with this that it’s hard to know where to begin. Mylan is certainly not the only company taking advantage of loopholes like tax inversions. But the fact that it is doing so at the crushing expense of people who need its lifesaving product to avoid easily preventable death is an outrage.

Congress is now demanding answers from the company, with several Senators from both parties now calling for hearings. Which could get awkward around the Senate dining room, since Bresch’s father is Sen. Joe Manchin (D-WV). So it will be interesting to watch if anything comes of this congressional interest, or if it gets buried. After all, Manchin is up for re-election in two years, but he’d also probably like to avoid making Christmas dinners awkward in his house until then.