The Farage factor: He's just like Donald Trump, but much better at shilling his nationalism and xenophobia

The U.S. should feel lucky that Trump isn't as effective as his radical European counterpart 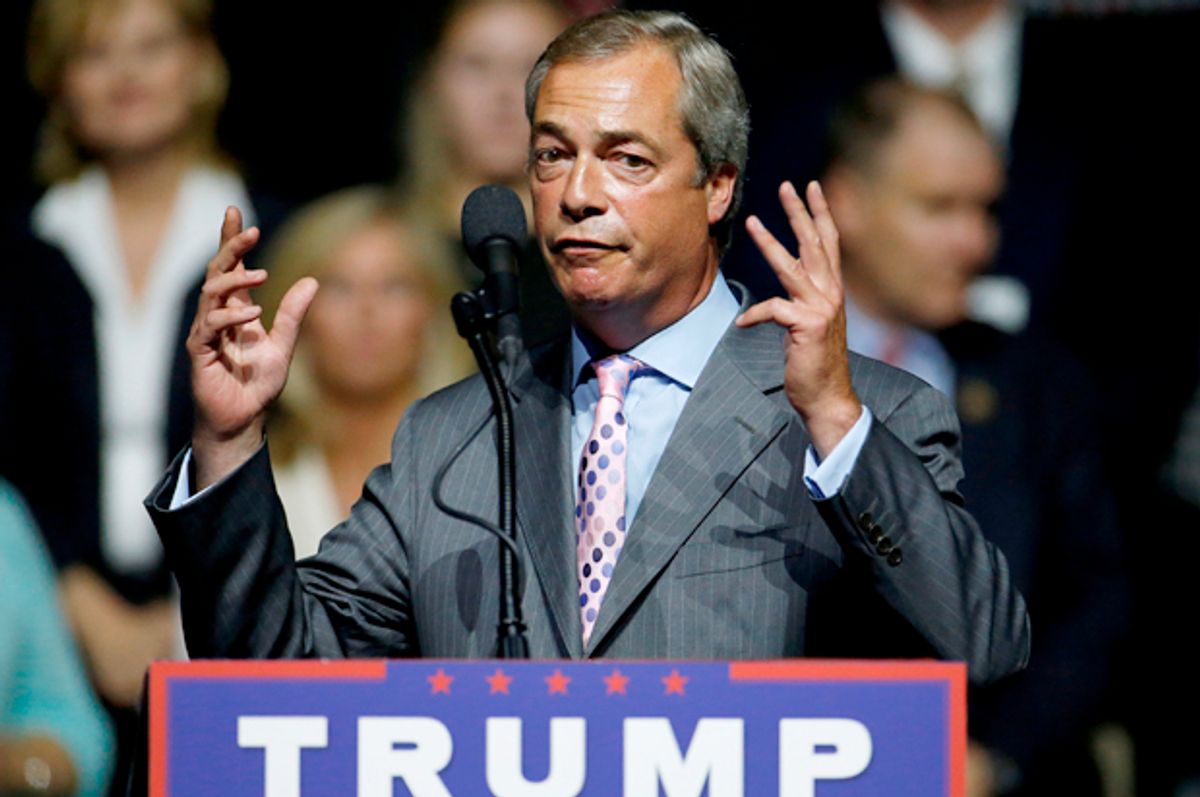 In a normal election, the sight of a political leader from a foreign country campaigning for an American presidential candidate would raise eyebrows, to say nothing of blood pressures on talk radio and cable news channels everywhere.

In 2016 it just feels like one more surreal moment in what long ago became the “Un Chien Andalou” of presidential elections. How else to describe the sight on Wednesday night of a man who recently led the campaign for Britain to secede from the European Union speaking to a nearly all-white audience in Mississippi, which itself was once part of an effort to secede from the United States, on behalf of a candidate who draws a great deal of his support from the spiritual if not literal descendants of that long-ago secession effort?

So there was Nigel Farage, with orange menace Donald Trump standing off to the side, deploying the kind of populist language that sounds much more coherent when it is not being spouted in unfocused bursts of Trumpian sentence fragments.

I come to you from the United Kingdom with a message of hope and a message of optimism. It’s a message that says if the little people, if the real people, if the ordinary decent people are prepared to stand up and fight for what they believe in, we can overcome the big banks, we can overcome the multinationals…We reached those people who had never voted in their lives but believed that by going out and voting for Brexit, they could take back control of their country, take back control of their borders, and get back their pride and self-respect.

This is the sort of language the Republican Party has been deploying for years, invoking the “real” Americans that Sarah Palin talked about ad nauseum during the 2008 campaign. These are the people who feel they have been lied to and scorned by liberal elitists, technocrats and the media. The people for whom “Take our country back!” has been a rallying cry all through the Obama administration.

Farage’s nod to the lost “pride and self-respect” of the “ordinary decent people,” and the implicit promise that it can be regained only if they elect Donald Trump president, has an obvious appeal when blasted out by authoritarian demagogues to citizens who feel beaten down by forces over which they have no control. Which is why it is a natural endpoint in the evolution of the GOP, coming as it does after decades of Richard Nixon’s appeals to the common man and the silent majority, or George W. Bush’s painting of himself as a humble, down-home Texan who’d rather be clearing brush on his ranch than attending some fancy Georgetown cocktail party. (In this, the media helped out by proclaiming Bush, rather than Al Gore, the guy Americans would rather have a beer with as if that was the most important quality we need in a president.)

The fact that our society has reached this low point in presidential nominations made it particularly irritating to watch conservatives bitterly complain all day Thursday – and really, for months now – about Hillary Clinton and the media tying all of the right to the alt-right, that collection of racists and white supremacists who make up a vocal percentage of Trump supporters. As if this is not where all that populist talk and perpetual anger that has inflated the conservative media dirigible for decades wasn’t due for a Hindenburg-style flameout at some point.

Watching Farage, I thought the country may have caught two breaks with the fact that our reckoning with right-wing populism came about in the figure of Donald Trump. For one, his racism is too overt to hide from an electorate that has grown more ethnically diverse and a country that is more and more sensitive to the legacy of racism that lives in its bones. For all the divisions that still disproportionately hurt people of color – mass incarceration, poor schools – there is at least a majority of voters who seem to want to be better than our ancestors. Which makes keeping Trump and his racist supporters out of the Oval Office a no-brainer.

The second break is the clownish cartoon that is Donald Trump himself. He is a thin-skinned bully, in the formulation of Elizabeth Warren, who lashes out with insults. A man who spent a year riffing at every rally about his poll numbers and his own awesomeness. A narcissist who can’t remember what he said yesterday and has been known to change his position on issues in the space of a single sentence.

But if he had been a man like Nigel Farage, who could couch his nativism in reasonable platitudes, who didn’t have a long history of racist statements, shady business deals and lawsuits filed against him for stiffing contractors and ripping people off? A man who could get out of the way of his own self-regard? A smooth talker, not an obvious bullshit artist like Trump? A person who might be able to blind Americans to his clownishness?

That person would be a dangerous candidate. Lucky for us, we didn’t get him this time around.