Trumpism's ugly side effect: How consumer culture is killing citizenship 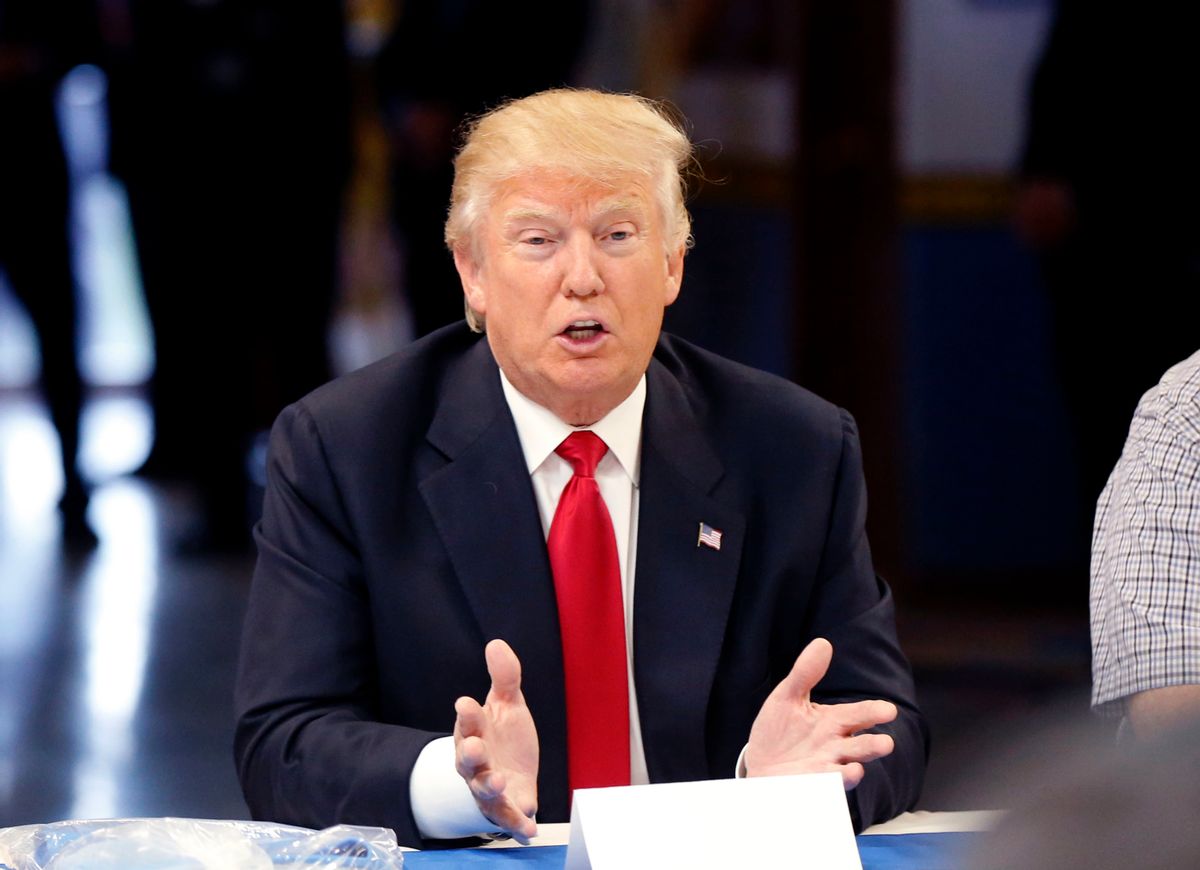 FILE - In this Aug. 22, 2106 file photo, Republican presidential candidate Donald Trump meets with active and retired law enforcement in Akron, Ohio. If this week’s string of vague and contradictory statements by Trump and his team revealed anything, it’s that his immigration policy is still evolving. Just days ago Trump reshuffled his campaign staff just as he tries to recalibrate his message for the general election, in which his tough stance on immigration may be more of a liability than it was in the Republican primary. (AP Photo/Gerald Herbert, File) (AP)
--

Donald Trump’s candidacy gives rise to many descriptors — authoritarian, bigoted, divisive. It is also the culmination of long-developing dysfunctions of a culture where market values have spread beyond appropriate limits and radically eroded citizenship.

Though many feel hopeless about changing this culture, resources are appearing for revitalizing citizenship and for building a movement for a deeper democracy, across party lines, after this sour and dispiriting election.

Susan Faludi describes the consumer culture well in her 1999 book, "Stiffed: The Betrayal of the American Man." Drawing on interviews with groups of men from African-American shipyard workers to veterans to evangelical Christians, she shows how ideals of loyalty, team play and the mastery of a vocation were replaced by “a competitive individualism… robbed of craft or utility and ruled by commercial values that revolve around who has the most, the best, the biggest, the fastest.” Masculinity became something “to drape over the body, not draw from inner resources, to be displayed not demonstrated.”

Trump’s public persona, winner-in-chief, is a poster child for Faludi’s male. He surrounds himself with gold-plated trinkets. He seeks to brand everything he touches. He is also a snake oil salesman, a figure familiar from American history.

All these traits might be called Trumpism, not simply Trump. Trumpism represents a model of public life which replaces citizens as makers of democratic society with a transactional politics that asks only “what’s in it for me?” It is the mark of a society where market values spread without limit, in which we are branding and selling ourselves along with everything else.

Out-of-control consumerism sets in early these days. A decade ago, the American Psychological Association’s Task Force on Advertising and Children found that children viewed more than 40,000 commercials each year. Our entire society is swamped with advertising, as Louise Story described in her New York Times article, “Anywhere the Eye Can See, It’s Likely to See an Ad.” Research by the Yankelovich group finds that people living in cities see up to 5,000 ads a day.

Targeted advertising in the age of the internet can dissolve crucial distinctions between evidence and image. As the American Psychological Association Task Force warns, “Comprehension involves not only the recognition that the advertiser has a perspective different from the viewer and that advertisers intend to persuade their audiences to buy their products, but also that such persuasive communication is biased.”

Trump’s posture — his constant pivots, his protean notion of “truth,” his bait-and-switch changes in policy — embody the logic of a culture where differences between salesmanship and leadership disappear.

If Trump is the outgrowth of an everything-is-for-sale culture, his flaws dramatize the need for revitalized citizenship. In American history, robust understandings of citizenship were associated with the language of commonwealth.

Growing from English traditions, commonwealth citizenship meant popular government based on the common consent of the people. John Adams proposed the designation for every state. Four states today are official commonwealths: Kentucky, Massachusetts, Pennsylvania and Virginia. The term also encompassed the shared public good that settlers created in communities across the country. For instance, Benjamin Franklin’s Leather Apron Club in Philadelphia in the Commonwealth of Pennsylvania was dedicated to “doing well by doing good.” It included tradesmen, artisans and shopkeepers who combined enterprise with commitments to civic products and generated a street-sweeping corps; volunteer firefighters; tax-supported neighborhood constables; health and life insurance groups; a library; a hospital; an academy for educating young people; a society for sharing scientific discoveries; and a postal system.

Commonwealth, as a word and a sentiment, was a theme not only for civic leaders and community builders but also for radicals and activists who sought a more egalitarian and inclusive democracy, challenging the nation in a prophetic voice. In Minnesota, for instance, “The Cooperative Commonwealth Program” of the Farmer-Labor Party in 1932, growing out of populist farmer, labor and cooperative movements, helped elect candidates for governor, the state legislature and Congress.

The freedom movement against segregation, which I participated in as a young man in the 1960s, was suffused with such citizenship, a sense of responsibility for the fate of the nation as a whole. Even the angriest of critics sometimes acknowledged the fact. “It’s ironical that the people who were slaves, the most beaten and despised people here, are to be at this moment the only hope that this country has,” said the fiery writer James Baldwin after the church bombing in Birmingham, Sept. 15, 1963, which killed four young girls. “The only people in the country at the moment who believe either in Christianity or in the country are the most despised minority.”

As people made the commonwealth and took responsibility for their communities, they became active citizens and gained power and authority.

Young people’s response to Bernie Sanders’ campaign, championing public goods — from schools to parks, infrastructure to health provision — suggests a generation hungry for the commonwealth. On the Republican side, the number of leaders who refuse to back Trump because of their commitments to values of civility and inclusion suggests there’s hope for a revitalized politics of common decency and the commonwealth, as well.

In our own work at the Sabo Center for Democracy and Citizenship at Augsburg College, we constantly see not only young people’s hunger for a public world beyond “everything for sale” but also their desire to help make such a world. In Public Achievement (PA), the youth civic education and empowerment initiative I co-founded in 1990, we saw a way to join the spirit, civics and political insights of the civil rights movement with the lessons of broad-based organizing and bring them to today’s youth. Such organizing creates “universities of public life,” in the words of organizer Ernesto Cortes, where people learned to work across the most bitter partisan, racial, economic and other divides on public projects.

PA is active in communities across America, as well as in other countries. In PA, young people work as teams coached by adults (often college students), learning skills to make change on public issues they choose. From Minnesota and Colorado to Texas and Georgia, young people are fighting demeaning depictions of blacks and Latinos and Asians. They champion the dignity of women, LGBT people, poor people and those with disabilities. They campaign for immigrant rights and against bullying. They create videos, songs and plays that convey the overlooked talents of our youth. And they make many public resources, from playgrounds to recycling centers.

The response to PA shows that young people want to be citizens every day, not only in preparation for voting or on voting day — citizens who are co-creators of communities in an ongoing way.

This idea of citizens as co-creators of communities is central to the transdisciplinary field of “Civic Studies,” recently supported by a $15 million endowment to the Tisch College of Civic Life at Tufts University.

Tisch College is a leader in the field of civic studies, and it has been central to the growing movement for civic education and citizenship that points beyond elections. Working with the White House Domestic Policy Council, it hosted a conference for higher education leaders in 2014. Last July, it helped to support a meeting of social studies teachers in the White House.

These are intimations of a movement for citizenship and renewed democracy across party lines.

For all its dysfunctions, the Trump campaign can be a wake-up call. Only such a movement will reverse public squalor in the midst of private affluence and revitalize a democracy for the 21st century worthy of our country’s ideals.