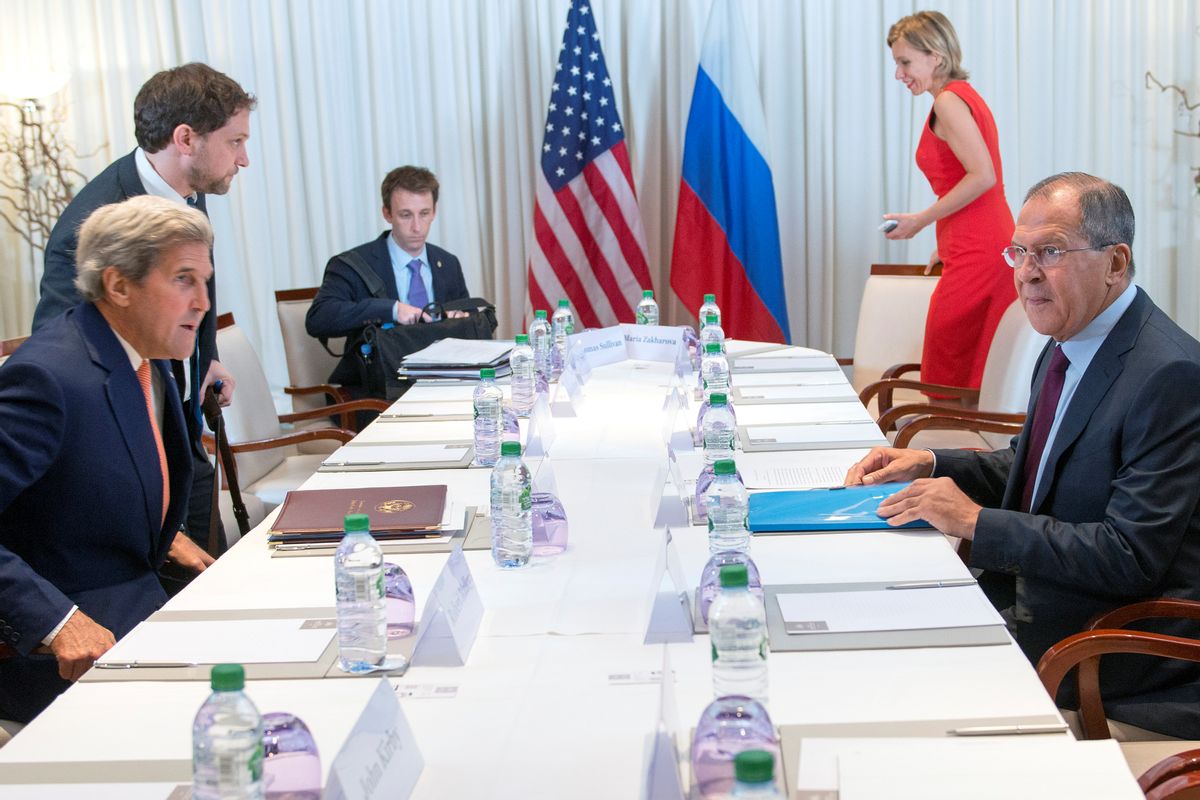 GENEVA (AP) -- The United States and Russia on Friday renewed efforts to secure a military and humanitarian cooperation agreement for war-torn Syria after months of hesitation, missed deadlines and failed attempts to forge a truce.

Russian Foreign Minister Sergey Lavrov said the talks on Syria with U.S. Secretary of State John Kerry were "excellent" as they took a lunchtime break from meetings in Geneva as part of a new U.S. effort to enlist Russia as a partner in Syria as fighting becomes more volatile and complicated with the introduction of Turkish ground forces. But well into Friday night the talks were continuing, with the ministers meeting and breaking to consult with staff, diplomats said.

Staffan de Mistura, the U.N. envoy for Syria, joined the conversations in the early afternoon, and told The Associated Press after the break: "We are still working."

Ahead of the discussions, neither Washington nor Moscow had signaled that an overall agreement is imminent, although progress appears to have been made in one critical battleground: the besieged city of Aleppo, where the United Nations has been clamoring for a 48-hour cease-fire so humanitarian aid can be shipped into the city.

Asked to describe the main impediment to a nationwide ceasefire in Syria as he sat down with Kerry, Lavrov said: "I don't want to spoil the atmosphere for the negotiations." Kerry did not speak and it was not immediately clear if either man would address reporters after their talks, which include discussions about the crisis in Ukraine.

On Thursday, U.N. officials said Russia was on board for the temporary pause in fighting in and around Aleppo. However, the Russian Foreign Ministry simply reiterated its general support for a ceasefire to open an aid corridor, and was waiting for the U.N. to announce it is ready.

The three-point plan for Aleppo, which U.N. officials say now needs the approval of two rebel groups and the Syrian government, would involve road convoys both from Damascus and across the Turkish border through the critical Castello Road artery. Another mission would go to southern Aleppo to help revive a damaged electric plant that powers crucial pumping stations that supply water for 1.8 million people.

Kerry was to meet with de Mistura separately later Friday in Geneva.

Expectations are low for the talks, particularly given how efforts to forge a new U.S.-Russia understanding have fallen short virtually every month for the past five years. At the same time, the administration is not of one mind regarding the Russians. The Pentagon has publicly complained about getting drawn into greater cooperation with Russia even though it has been forced recently to expand communication with Moscow. Last week, the U.S. had to call for Russian help when Syrian warplanes struck an area not far from where U.S. troops were operating.

Despite the apparent incremental progress on Aleppo, U.S. officials are keen to broaden the focus and hammer out a diplomatic initiative that would see greater military cooperation with Russia that could lead to a resumption of talks on a political transition. However, previous efforts to set target dates for the start of the transition process have failed, most recently when an early August timeline had to be abandoned.

U.S. officials say it is imperative that Russia use its influence with Syrian President Bashar Assad to halt all attacks on moderate opposition forces, open humanitarian aid corridors, and concentrate any offensive action on the Islamic State group and other extremists not covered by what has become a largely ignored truce. For their part, U.S. officials say they are willing to press rebels groups they support harder on separating themselves from the Islamic State and al-Nusra, which despite a recent name change is still viewed as al-Qaida's affiliate in Syria.

Those goals are not new, but recent developments have made achieving them even more urgent and important, according to U.S. officials. Recent developments include military operations around the city of Aleppo, the entry of Turkey into the ground war, Turkish hostility toward U.S.-backed Kurdish rebel groups and the presence of American military advisers in widening conflict zones.

Meanwhile, in a blow to the opposition, rebel forces and civilians in the besieged Damascus suburb of Daraya were to be evacuated on Friday after agreeing to surrender the town late Thursday after four years of grueling bombardment and a crippling siege that left the sprawling area in ruins. The surrender of Daraya, which became an early symbol of the nascent uprising against President Bashar Assad, marks a success for his government, removing a persistent threat only a few miles from his seat of power.