Britney's path to "Glory": The pop survivor's least-personal album is also her best in more than a decade

Spears doesn't try to fake an intimate connection with fans on her new LP, and it's a masterful move 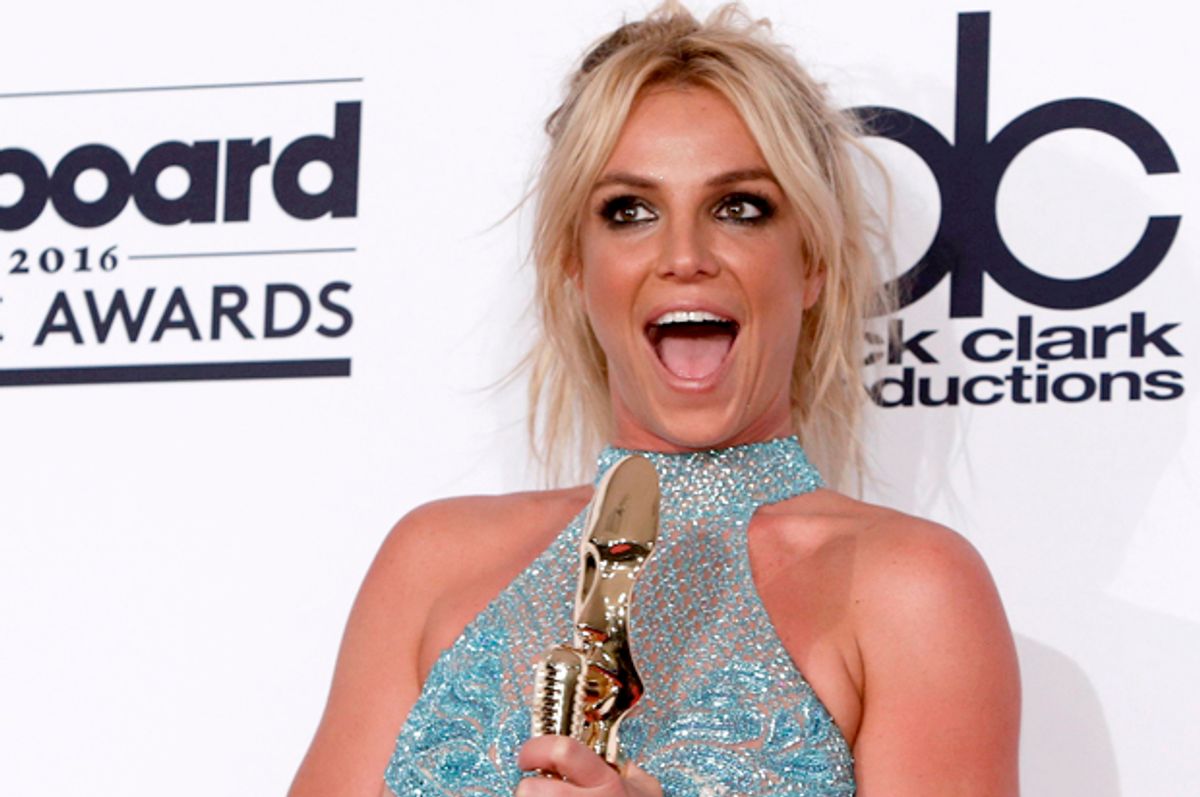 It’s hard to say what’s more surprising: the fact that “Glory” is Britney Spears’ ninth LP or that it’s the pop singer’s best in at least a decade.

The album, released on Spotify and Apple Music on Friday, is a long overdue return to form for a onetime superstar whose best days seemed to be behind her. The critical lemon “Britney Jean” of 2103, featuring cheap, plastic production by will.i.am, was the musical nadir in a career full of peaks and valleys for the troubled diva. Disengaged and directionless, Spears barely sang on that album’s lead single, “Work Bitch.” Britney channeled her inner RuPaul, barking over a series of Teddy Rooseveltian commandments about pulling oneself up from one’s bootstraps.

“You wanna live fancy?” she asked. “Live in a big mansion? / Party in France? / You better work bitch.”

Spears followed up that record, her lowest-selling to date, with last year's “Pretty Girls,” a hastily recorded song-of-the-summer wannabe that attempted to cash in on the dwindling star wattage of Iggy Azalea. By the time the track hit radio, Azalea’s moment was already over: The Australian rapper had spent the better part of a year defending herself against accusations that her put-on Southern rap persona amounted to minstrelsy. “Pretty Girls” topped out at No. 76 on the Hot 100.

On “Glory,” Britney has shied away from cash-in singles and has embraced her strongest feature: her ability to surround herself with producers who know how to make the best use of her infamously limited range. Mattman & Robin (neé Mattias Larsson and Robin Fredriksson) served as two of the key producers on Carly Rae Jepsen’s 2015 masterpiece, “Emotion,” one of the definitive pop records of the decade. Their imprints are all over the slinky album highlight “Do You Wanna Come Over?” On the guitar-tinged come-on, Spears makes having sex with her sound like she's performing an act of charity. “No one should be alone if they don’t have to be,” she coos.

Britney is even more explicit on “Invitation,” in which she dabbles in some light S&M. “I know it might seem crazy,” she sings. “But I'ma put you in this blindfold/I just need you to trust me.” The track was produced by Nick Monson, who shepherded another Disney star Selena Gomez into adulthood on “Revival.” The well-reviewed record, Gomez’s best yet, featured future stripper standards “Good For You” and “Hands to Myself.”

Spears is chained to her proverbial bed throughout “Glory,” her most overtly erotic record to date. There has always been something studiously innocent about her sexuality, which manages to be both savagely carnal and not about sex at all. When Chuck Klosterman asked her what it meant to represent America’s fascination with the Madonna/whore dichotomy during a 2003 interview, she was repulsed. “That's just a weird question,” she said, without the slightest hint of coyness. “I don't even want to think about that. That's strange, and I don't think about things like that, and I don't want to think about things like that.”

Take “I’m a Slave 4 U,” which could be reasonably read as an homage to a dominant-sub relationship. To Spears, it’s not about a man. It’s about the music. She’s a slave to the music.

When it comes to her career, Britney is a famously unreliable narrator. She recently told James Corden “Oops . . . I Did It Again” isn’t about anything at all. But it is, of course. In the lead single from her 2000 album of the same name, Spears confessed that she’s accidentally been leading on a guy who is interested in her: He’s in love and she’s just having fun. During the Klosterman interview, Britney simultaneously suggested that she both did and did not have sex with Fred Durst. Likewise, the age at which she lost her virginity appears to have changed more times than the anticipated release date of the new Frank Ocean album.

The best track — perhaps in spite of itself — from “Britney Jean” is the one that fully showcased the star’s casual contradictions. On “Perfume,” Britney waits at home while she worries that her boyfriend might be cheating on her with an ex. “Am I being paranoid?” she wonders. “Am I seeing things? Am I just insecure?” For the self-titled LP, Spears promised her “most personal album to date.” This track, a nakedly honest ballad about the fear of infidelity, appears to deliver that — except that it doesn’t at all. The song might evoke disclosure, but it is not actually personal. “Perfume” was written by Sia in the mold of hired-hand ballads like “Pretty Hurts.” There’s often an uncanny valley aspect to Spears’ music: The moment Britney appears to let her fans in, it’s clear that someone else is pulling the strings.

“Glory” is the first album to solve that riddle. By being strictly anti-narrative, the record is content to say nothing about the famous woman who sings it — and is all the better for it. There’s no reason that “Clumsy,” the strongest of the album’s promotional singles, could not be sung by her pop music competition, like Gomez or Katy Perry. (The track, after all, shares a name with a Fergie song.) On “If I’m Dancing,” Spears joyously sings, “I’m dancing, I know the music’s good,” and it’s the closest she’s ever arrived at an artist statement.

It’s unexpected then that her least personal album yet is where she's sounded the most in command since 2003’s stellar “In the Zone,” whether that’s of her image or voice. Britney isn’t much of a singer, to put it lightly, and many of her recent singles have leaned so hard on autotune that she sounds like she has replaced by HAL from “2001: A Space Odyssey.” This tendency makes her songs sound not only robotic but also hollow, as if she is not really present. A great example of this is 2007’s “Piece of Me,” recorded at the height of her public breakdown. The track, a middle finger to media coverage of her personal troubles, was both defiant and empty; producers Bloodshy & Avant used backing vocals from Robyn to fill in the gaps of their barely there starlet.

“Glory,” however, allows Britney to do something she hasn’t in ages: belt a tune as if her life depends on it. On the bluesy “What You Need,” Spears implores a one-night stand to stick around a little bit longer. “Don't know just what you started,” she croons. “Take a chance, let me roll the dice.” There’s also “Coupure Électrique,” a Deluxe Version entry in which Spears sings entirely in French. She acquits herself nicely.

While Spears will never be Beyoncé or Adele, “Glory” proves that the star is the ultimate pop-music survivor, someone who can continue to churn out mature, accomplished records nearly two decades into her career. Britney’s sheer persistence is her defining feature, with her mounting comeback after comeback even as her contemporaries have all fallen by the wayside. Spears might not have the pipes of Christina Aguilera or even Jessica Simpson, but Britney has the one thing they lack: She still has a music career. No matter how many times it seems like she can’t possibly rise again, Spears emerges triumphant.

The timing of that her latest comeback couldn’t be more relevant. This weekend Spears will mount the stage for the Video Music Awards nine years after the lowest point in her professional career, when she opened the MTV awards show with a botched rendition of “Gimme More.” Following a nasty divorce and a failed stint in rehab, she looked like a shell of her former self.

If Spears has proven that — through sheer force of will — she isn’t going anywhere, she has insisted precisely this since the beginning of her career. Although 2000’s “Stronger” appears to be about her decision to leave a cheating partner, the song also advertises her resilience in the face of obstacles. “Now it's nothing but my way,” Britney sings over Swedish super-producer Max Martin’s gargantuan bass. “My loneliness ain't killing me no more / I'm stronger than I ever thought that I could be, baby.”

Britney isn’t just back. Seventeen years after “Baby One More Time” first hit radio stations, she has proved herself indestructible.