Ted Cruz vs. Rick Perry: The Trump connection to their potential Texas showdown for Senate 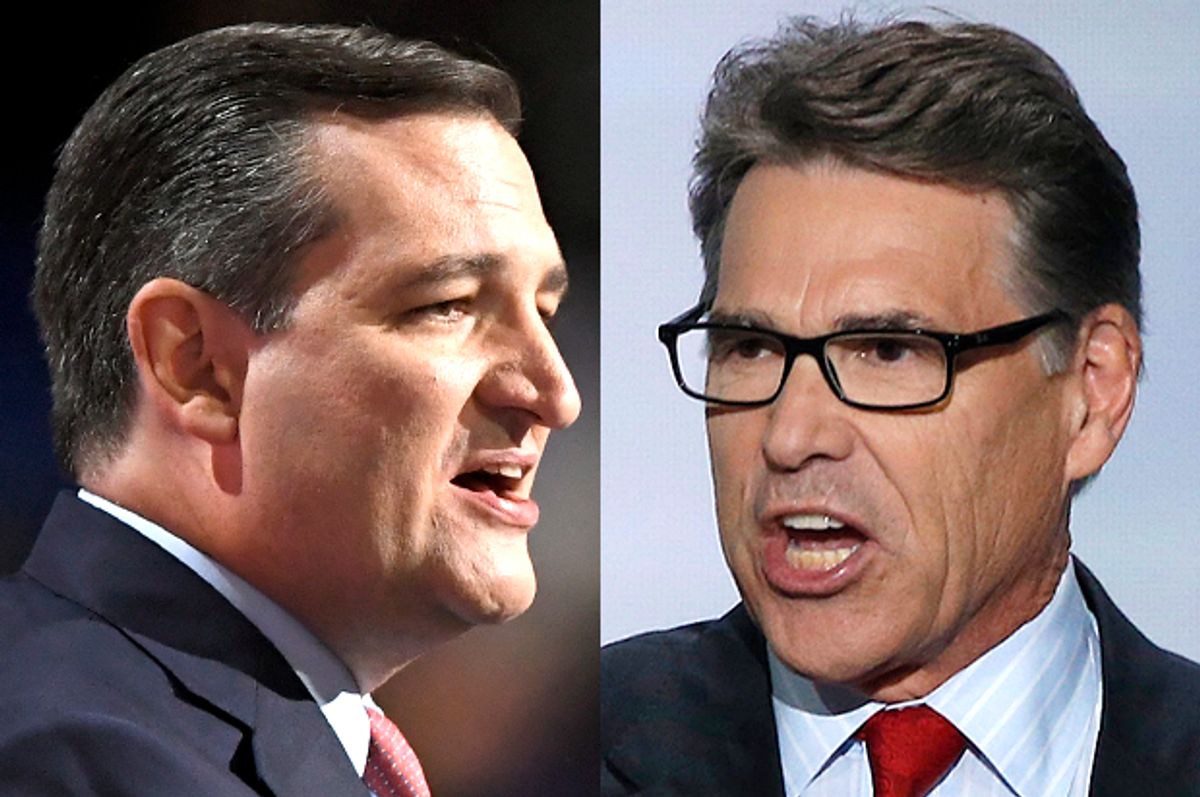 One of the most dramatic early moments during the primaries came from former Texas Gov. Rick Perry when he delivered a shocking, blistering speech about Donald Trump. It was only about a month into the race and the candidacy of Trump didn't seem like a particular threat. But Trump was already hitting the immigration issue very hard and people were wondering how much damage he was going to do to the GOP.

Still fighting his battered image from 2008 when he blundered badly during a debate, Perry was polling only in the low single digits when he decided to confront Trump in July 2015. Until then, there had been a couple of tepid gestures from Sen. Lindsay Graham, who called Trump a "wrecking ball," and former Sen. Rick Santorum, who mildly criticized "The Apprentice" star for his "verbiage." And this was because of the dynamic that ended up making it possible for Trump to go all the way, namely that all the candidates assumed they needed to go easy on him because they hoped to inherit his voters when his ridiculous campaign inevitably blew up.

Perry decided to take a chance and separate himself from the pack by issuing a statement criticizing Trump's border nonsense. He said, in part: "I have a message for my fellow Republicans and the independents who will be voting in the primary process: What Mr. Trump is offering is not conservatism, it is Trumpism – a toxic mix of demagoguery and nonsense."

Trump was not amused and tweeted a tart response: "GovernorPerry failed on the border. He should be forced to take an IQ test before being allowed to enter the GOP debate."

They traded increasingly hostile barbs about border security for a while, with Perry defending his record and knowledge of the issue and Trump responding by calling him stupid: "I see Rick Perry the other day. . . . He's doing very poorly in the polls. He put on glasses so people will think he's smart. And it just doesn't work! You know people can see through the glasses!"

Having had enough (and judging that it would be smart politics), Perry finally let fly with one of the most memorable speeches of the 2016 campaign. Appearing before the Opportunity and Freedom PAC conference, Perry said, “Let no one be mistaken: Donald Trump’s candidacy is a cancer on conservatism, and it must be clearly diagnosed, excised and discarded."

Added Perry: I, for one, will not be silent when a candidate for the high office of president runs under the Republican banner by targeting millions of Hispanics and our veterans, with mean-spirited vitriol. I will not go quiet when this cancer on conservatism threatens to metastasize into a movement of mean-spirited politics that will send the Republican party to the same place it sent the Whig Party in 1854: the graveyard.”

It was a good try, but it didn't help Perry's campaign. Perry was the first to drop out of the race just two months later. But he left with his head held high, widely admired for having had the nerve to call Trump out early on. He was a stand-up guy.

Meanwhile, Perry's fellow Texan Ted Cruz had gone with the conventional wisdom and was keeping his enemy very close. Of all the candidates, Sen. Cruz was the one who had cultivated Trump as a fellow traveler. When Trump and NBC, which had broadcast some beauty pagaents that Trump produced, clashed over Trump's immigration comments, Cruz rushed in to defend him, saying, "I like Donald Trump. I think he's terrific, I think he's brash, I think he speaks the truth."

Added Cruz: "And I think NBC is engaging in political correctness that is silly and that is wrong."

The two of them even held a joint rally on Capitol Hill to protest the U.S. deal with Iran over nuclear weapons.

By the end of the primary season, the bromance had deteriorated into extreme loathing, with Trump tweeting unflattering pictures of Cruz's wife and accusing his father of being involved in the JFK assassination. When Cruz's father exhorted the evangelical community to support his son, Trump said he thought it was a disgrace that Cruz Sr. was "allowed to do that."  (This is a Trump trademark: Apparently he thinks there should be laws preventing people from running against him and saying things he doesn't like.)

The big finish, of course, came at the GOP convention in Cleveland when Cruz went before the nation ostentatiously refused to endorse Trump and got lustily booed by the delegates for it. My theory is that Cruz was positioning himself as the "conscience of conservatives" if Trump implodes in November.

Meanwhile, Perry had done a big about-face. Once Trump secured the nomination, much to everyone's surprise, he enthusiastically endorsed the man he once called "a cancer on the presidency," saying “he is not a perfect man," adding, "But what I do believe is he loves his country and he will surround himself with capable, experienced people and he will listen to them." The National Review wondered what in the world would make Perry do such a thing, suggesting that Perry was being shortsighted about his future. It turned out that Perry was strongly signaling that he was "open" to being tapped for vice president. Poor Perry. That didn't work out for him either.

But there is hope for another attempted comeback. Proving that hell hath no fury like a billionaire scorned, after his former BFF Cruz's apostasy at the convention, Trump vowed to spend millions to defeat him in his next election. And look who's fixing to run against him? That's right, good old Rick Perry — and with Trump's encouragement.  The polls show he could beat him!

So what we have is two Texas Republicans who have benefited both from opposing and supporting Donald Trump at different times during this campaign facing off in a race in which they will each say they represent the conscience of the Republican Party. And clearly, neither of them have one themselves.