A life in limbo: The 'doubly invisible' Mexican immigrants

These immigrants lack rights, opportunities and help during crises 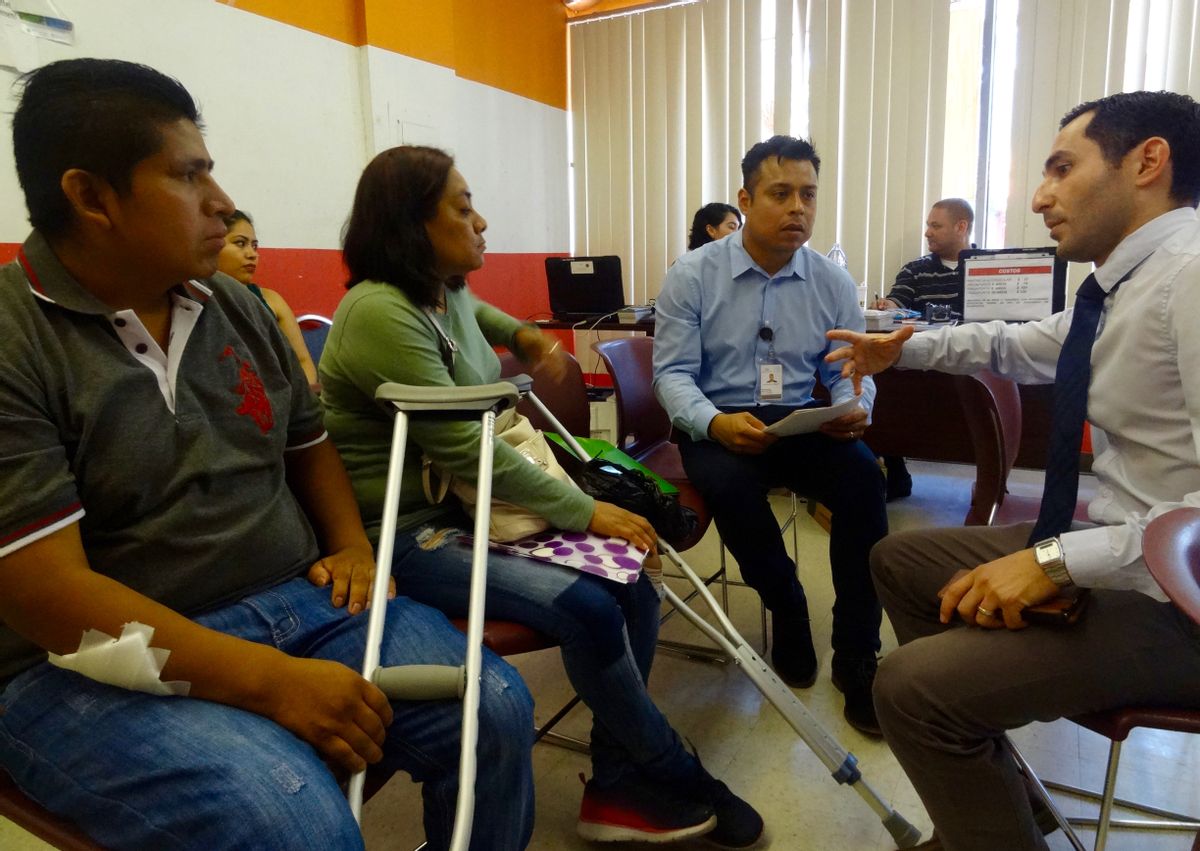 Fidencio Luna (left) sits with his wife and the executive director of the immigrant rights organization El Centro in Staten Island as he fills out paperwork to receive his first Mexican passport. Photo courtesy of Amy Lieberman. (Amy Lieberman)
--

For the past 10 years, Fidencio Luna maintained a set routine — work, home, then work again — that sometimes expanded to include the occasional bar visit with friends. He never once strayed beyond the perimeters of New York City.

Traveling was complicated because up until June, Luna, 26, did not have any form of official photo identification, neither from the Mexican nor the U.S. governments. That changed after a debilitating hit-and-run accident left Luna with severe injuries, and captured the attention of local media and the Mexican Consulate. The Mexican government issued Luna his first passport soon after the accident and also helped him process forms for an emergency protection visa.

The visa will pave a path to legal residency in the United States for Luna. Even just the Mexican passport could be transformative for immigrants, however. It will help Luna open a bank account and travel more widely beyond his base of Staten Island, a New York borough dense with immigrants.

But the unrecognized existence is all Luna has known in the United States and he questions how much these documents can turn his life around. Up until recently, he was bound by a fake identification card and cash-only transactions, placing him in a vulnerable situation.

He remains unemployed from his off-the-books construction job following his accident, and he now faces sustained injuries and medical debt with dwindling savings and no health care. He is not sure how the Mexican passport can solve these problems, since it still will not grant him access to health care or disability benefits. Still, the passport can bring longer-term benefits, which Luna had long ago given up on.

"Years ago I went to the Mexican Consulate for a passport and I didn't have the right documents to prove my identity," explained Luna while waiting in the office of a Staten Island-based non-profit, El Centro, for his new passport. "I didn't have anything to prove my identity. And then it wasn't important. No one asked for my ID. I couldn't find a reason to want one."

Upwards of 700,000 Mexican immigrants living in the United States lack birth certificates or valid photo identification, according to the Mexico City-based Be Foundation. These are the "doubly invisible," unrecognized in both their native and adopted countries. They represent a portion of the estimated 7 to 10 million Mexicans who live without birth certificates, as the Be Foundation estimates.

"The reason they are not being registered is that up until a year ago, it cost about $45 to register a child, which can be a huge amount for people," said Karen Mercado, president of the Be Foundation, which has lobbied for registration reform in Mexico.

"Now, it's free, but we have all of these people who have been living their lives without any fundamental rights to anything, lacking opportunities. They essentially don't exist," Mercado said.

The problem is universal and not concentrated in Latin America. South Asia and sub-Saharan Africa report the lowest rates of birth registration, while just 65 percent of all births are registered globally, according to United Nations figures. Contributing to this trend are the cost to register a child — as once was the case in Mexico — inaccessibility to government offices and lack of awareness.

The challenges of living without any state recognition can infringe upon daily life in the United States, restricting access to everything from library cards to bus tickets. These effects are felt most acutely among the country's nearly 12 million Mexican immigrants, accounting for its largest percentage of foreign-born residents.

Across the United States, 50 Mexican Consulate branches routinely dispatch mobile units to connect with Mexican nationals and issue passports, or in rare cases, birth certificates. The Mexican government prides itself on its ability to issue a passport within an hour, faster than almost all other foreign consulates.

Yet the bureaucratic process can be tricky for some immigrants to navigate, especially when they are presented with a nearly impossible scenario: Many, like Luna initially, do not have the proper forms, such as a school diploma or ID cards to prove they are who they say they are. Others might not be registered at all in the government's database.

The New Jersey-based non-profit Mi Casa Es Puebla works for months with clients to build their paper trail back in Mexico. Documents proving a person's baptism and military service, or even a note from a local mayor verifying a one-time residency, can help form the case for identity.

"People might have been born at home and then later were registered or not, so we try to find pieces of information that show they were actually born in their city or town," said Patricia Ruiz-Navarro, director of the Puebla-funded organization that works closely alongside the Mexican state and federal government.

Each month the Mexican Consulate issues more than 1,000 passports and Mexican state ID cards in Mi Casa Es Puebla's Passaic, N.J., office. Not all passports go to first-time holders. Attendees at a mobile consulate session on a recent Saturday morning said they were seeking passport renewals or IDs to replace lost cards.

The consulate in New York and Los Angeles said it does not formally track how many people seek brand-new birth certificates or passports.

"We can give them both passports and birth certificates. It happens often that people come without any form of identification. We try to help them. Sometimes they really do not have anything and we try to help them. Other times we refer them to the localities where they were born, to speak with a mayor of their village, maybe," said Carlos Gerardo Izzo, the spokesperson for the Mexican Consulate in New York.

The immigrants in the most vulnerable positions likely do not wind up at one of these mobile consulate events, filled with rows of government officials at tables and patiently waiting visitors armed with papers and pens. The issue has also not caught on with major immigrant rights groups in the United States, said Don Kerwin, the executive director of the New York-based Center for Migration Studies, as immigration reform has dominated policy work.

"For the most part a document is not always something that rises to the top of the list for Mexican people, unless they really find themselves in a position of vulnerability," Ruiz-Navarro explained. "Many people go about their days just hustling and working. It's about social capital and some people have that, and others might not be so exposed to it."

Lack of registration has rippled political effects. The phenomenon is likely limiting applications from immigrant children seeking deportation relief, said Robert Smith, the director of the New York-based Mexican Initiative for Deferred Action, an initiative that promotes Deferred Action for Childhood Arrivals (DACA). An expansion of DACA, President Barack Obama's relief program for children, was stalled in June in the Supreme Court. The initiative could still benefit as many as 2.3 million brought to the United States as children.

"People who are eligible are not applying," said Smith, noting some are afraid they'll be deported.

Federal legislation now pending implementation in Mexico would push Mexican Consulates to identify populations who are entirely unregistered, not detectable in their database.

"It would be impossible for us to say how many people would fall in this category. It could go up to a million. There are an incredible amount of people in this situation and what is most interesting is when you talk to them, people will say, 'I thought I was the only person like this.'"

Luna says that it's normal among his friends in Staten Island to live without an ID. It took several letters from Luna's primary school and local municipality to help piece his case together, said Favio Ramirez-Caminatti, director of the immigrant rights and community group El Centro in Staten Island.

Now, Luna's focus is on a slow physical recovery, following serious injury to his ankle. He's hopeful he will eventually visit his parents back in Mexico, but is still unable to walk without the aid of his crutches.

"We'll have to see if it [the passport] can fix things and how it will change my life."