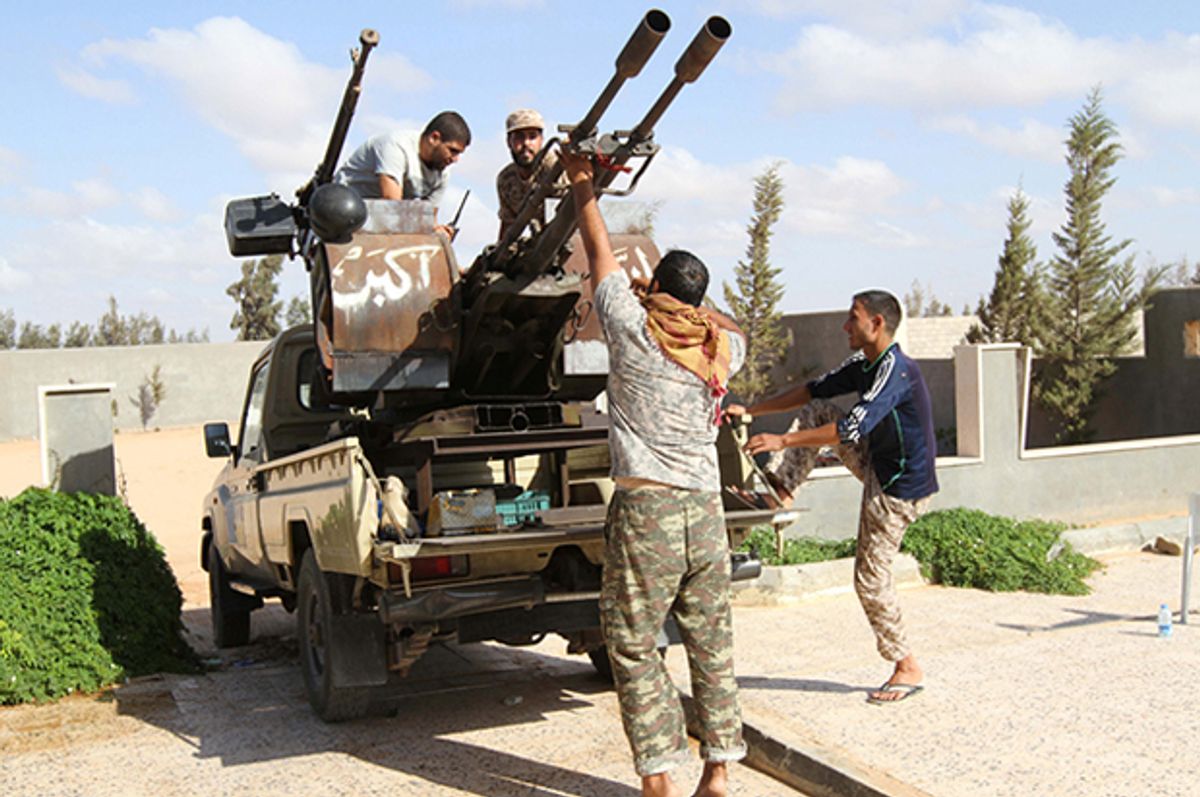 Libya remains embroiled in chaos. Its U.N.-backed government is falling apart, and internal wars continue to be waged on multiple fronts. ISIS ravages the north of the country. The U.S. is bombing it — again, in the second war in five years.

But what is rarely communicated in media reports is that the only reason ISIS is in Libya in the first place is because of the 2011 NATO regime change operation that toppled the government, giving Islamist extremists a vacuum in which to expand.

Western powers sold the 2011 bombing campaign as an ostensible humanitarian mission to protect rebels fighting the regime of Libya's Muammar Qadhafi. Micah Zenko, a senior fellow at the Council on Foreign Relations, used NATO's own materials, however, to conclusively show that "the Libyan intervention was about regime change from the very start."

In the process, the Obama administration "misled the American public," Zenko wrote, because "admitting to the honest objective in Libya — regime change — would have brought about more scrutiny and diminished public support."

You won't see Zenko's conclusive study cited in media reports, nevertheless. It is a wretched thorn in the side of the largely unquestioned hegemonic narrative.

Libya, a once relatively prosperous oil-rich North African nation, is still reeling from the NATO intervention. Members of Libya's internationally recognized parliament voted 61 to one this week in an overwhelming expression of no-confidence in the Western-backed Government of National Accord, or GNA.

"The vote could severely undermine the fledgling government, which Western nations see as the best hope for combatting a potent Islamic State affiliate and curbing human trafficking," the Associated Press noted.

In its report on the story, however, the AP did not once acknowledge the NATO bombing. It spoke of "the 2011 uprising" as though it were an exclusively indigenous event, absent of foreign intervention.

The AP is by no means alone. Western governments, news outlets and pundits have consistently downplayed their role in helping foment Libya's chaos. The NATO bombing campaign that destabilized the region is slowly being expunged from history. Instead, Libyans themselves are being blamed.

The Washington Post's recent report on ISIS' bureaucratic reign of terror in Libya did not mention the Western bombing campaign. Nor did The Wall Street Journal's. It is quite strange that major outlets can report on the declaration of a new war in Libya without even acknowledging the previous one, which took place just five years before.

In an article for the influential think tank the Brookings Institution this month, scholar Federica Fasanotti openly proposed that Libya be partitioned. She spoke of "Libya’s tribal divisions," characterizing the country as a kind of primitive backwoods, capable only of political dysfunction.

"Libyans today have much in common with the tribes of one century ago," she wrote, with an ironic air of colonial arrogance. "Libyans will continue to be their own worst enemies."

Not once in the piece did Fasanotti acknowledge the 2011 NATO war in Libya; never did she mention the bombs and air strikes. She discussed the history of Italian colonialism in Libya as if it were exclusively a thing of the past, and argued that the Italian colonialists had earnestly tried to "unify" the country, but it remains divided, apparently by inevitability.

This is what passes muster in the intelligentsia today — condescending screeds on the supposed intransigence of Libyan tribalism that look as though they were lifted from the colonial era.

Today, Libya has competing governments. In the west is an Islamist regime centered in the city Tripoli; in the east, with the capital Tobruk, is the Libyan National Army, under the leadership of Khalifa Haftar, a general with past links to the CIA.

Meanwhile, in the northern city of Sirte, the murderous extremist group ISIS has created its largest so-called "caliphate" outside of Iraq and Syria. During the 2011 war, Sirte was reduced to rubble. Fascists who declared a so-called "Islamic State" emerged from the ashes.

Sirte was the birthplace of former dictator Muammar Qadhafi. It was also the place of his death: He was brutally murdered in the 2011 Western-backed uprising, sodomized with a bayonet by rebels. Upon hearing the news of his death, then-Secretary of State Hillary Clinton quipped live on TV, "We came, we saw, he died!" Clinton played a leading role in pushing for the bombing.

Thousands of Libyans have been killed, and a massive refugee crisis has been sparked in North Africa. In response to the influx, NATO announced that it would impose a blockade on Libya, to prevent African refugees from seeking asylum in Europe. Rights experts say the decision likely violates international law. It has become just one of myriad laws being violated in the conflict.

The prospects of some kind of stability being reached in the near future look slim, as the GNA falls apart. The U.N. special envoy to Libya, Martin Kobler, warned this month that support for the unity government is "crumbling."

With a collapsing government and an insurgent Islamic State, the U.S. reached into its bag of tools and pulled out its favorite choice: bombing.

The Obama administration announced earlier this month that it was launching a new bombing campaign in Libya. To justify the new war, the Pentagon cited the Bush-era Authorization of the Use of Military Force, which was passed by Congress on Sept. 14, 2001.

From Aug. 1 to the 17th, U.S. Africa Command, or AFRICOM, launched 57 air strikes in Libya, according to the Pentagon. There are also U.S. special operations forces on the ground inside Libya.

There was effectively no national discussion about whether beginning this new war — the seventh U.S. bombing campaign in a Muslim-majority country — was a good idea. In fact, there was not even much media coverage at all.

When the bombing in Libya is rarely acknowledged in the media, news outlets report that the GNA requested U.S. military intervention. This is technically true, but only part of the story. Scholar Vijay Prashad pointed out that the GNA did not have much of an option. The GNA hoped that, by welcoming U.S. air strikes, Western countries and the U.N. would lift the sanctions that prevent it from using $67 billion of its own funds.

"The West, in other words, is holding the money hostage till Libya’s government goes along with its agenda," Prashad wrote. "When the Libyan government requests US airstrikes, it does so not of its own volition but because of the conditions for the release of its own money."

There is no question that ISIS needs to be defeated, in Libya and beyond. But what comes after? Will bombing ISIS actually defeat it? Can ISIS really be bombed into oblivion? Will bombs destroy its ideology? These are questions that were never discussed in the media or in U.S. politics.

War has become mere routine. In the U.S., the declaration of a new war is just a quotidian happenstance.

Many journalists have been derelict in their duties, meanwhile, failing to provide context to inform the public about what is going on and why we got here.

The New York Times published a 44,000-word piece earlier this month titled "How the Arab World Came Apart." The article purports to explain the chaos in Libya, but greatly downplays the role of Western military intervention. In fact, it does not mention NATO once, nor does it acknowledge the U.N. Security Council no-fly zone that paved the path for bombing. (The piece also supposedly explains the rise of ISIS, but it only mentions Saudi Arabia twice, and does not acknowledge Qatar at all. Likewise, the CIA, which spent billions of dollars training and arming rebels in Syria, is mentioned just twice, and only then in terms of its operations in the 1970s.)

In order to defeat ISIS, it is imperative that we have a discussion about what created the horrific conditions in which it could thrive. If those conditions are not bettered, the problem will fester. And bombs cannot better those conditions.

Libyans are now bravely putting their lives on the line to fight ISIS. They are sacrificing everything to defeat the extremists who have taken over their country. Yet Western governments and media outlets can barely even concede their responsibility for the dire situation.

To his credit, President Obama has acknowledged the crucial role the U.S. played in the catastrophe. He admitted that the military intervention "didn't work," and told Fox News his “worst mistake” was “probably failing to plan for the day after what I think was the right thing to do in intervening in Libya.”

Alas, regret does not change reality. And Obama still insisted that the intervention was "the right thing to do." Apologists for the Iraq war say the same thing: Bush was right to invade Iraq, they argue (even if it was in flagrant contravention of international law), but the real problem was that the U.S. did not plan well for the aftermath. In both cases, this is a distortion of history of the highest order.

The U.S. has attempted a military solution in Afghanistan for 15 years, and, in some ways, the country is even worse now than it was when the U.S. launched the war in 2001. In the process, the Afghan people paid the price: more than a quarter of a million people lost their lives, and millions were displaced.

The U.S. likewise has several thousand troops on the ground in Iraq (despite previous promises to the contrary), and is carrying out another bombing campaign there. Former Prime Minister Blair admitted that the illegal invasion he backed led to the rise of ISIS.

As long as this remains the modus operandi, as long as Western imperial powers are unwilling to acknowledge their role in creating the problems in Libya and beyond, as long as they attempt to solve those problems with bombs, there will never be a solution.

Before the start of the so-called War on Terror, violent Islamist extremism was relatively isolated. Now it has spread throughout the Middle East, North Africa and South Asia like wildfire, burning all in its wake.