An authoritarian nightmare: Trump in the White House is a threat to American democracy as we know it

Like Nixon and McCarthy, Trump is envisioning an America where rights and freedom do not matter 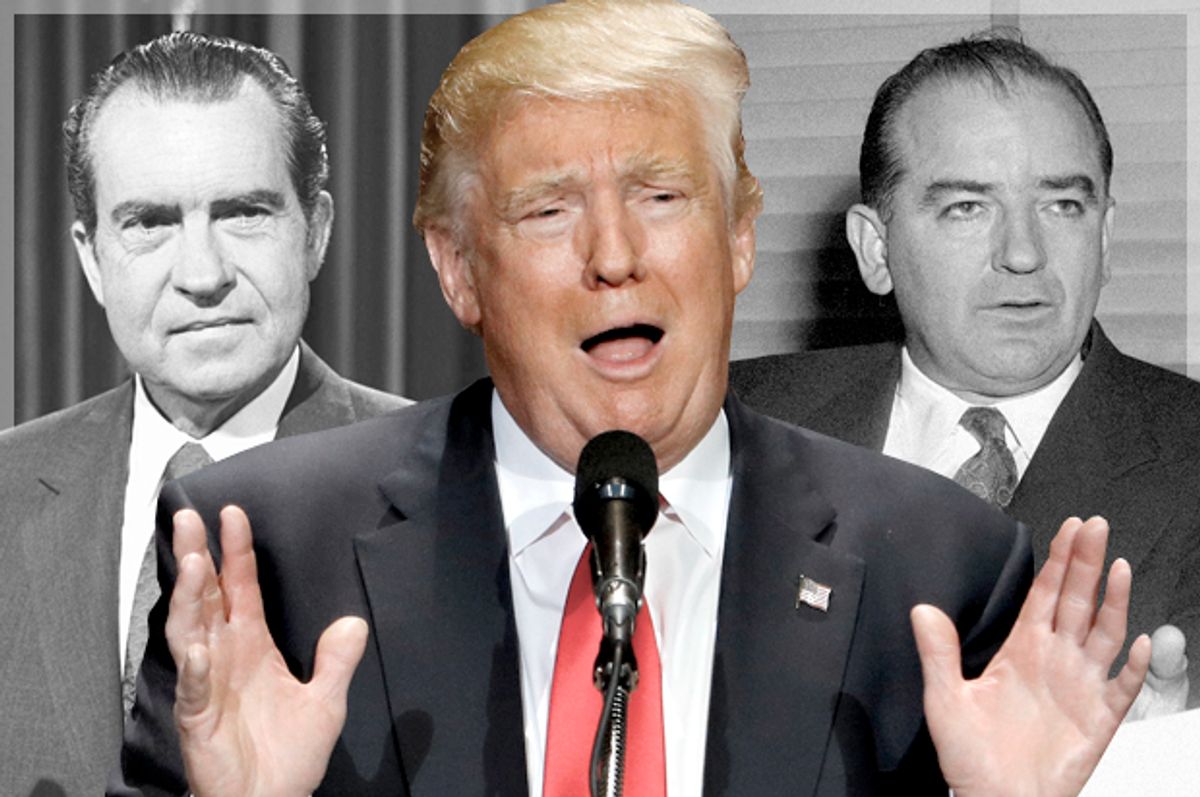 We've been documenting Donald Trump's scary authoritarian tendencies since he announced his run for president but it doesn't seem to be something that's really sunk in. One suspects that if he were to be elected some people would come to regret not taking seriously. A president can summon a lot of power in this regard if he chooses, particularly if he can create a sense of urgent danger among the population, something for which Donald Trump has a demonstrated talent.

From the very first week, he's talked about forced deportation of millions of people and building the Great Wall of Trump both of which evoke images of totalitarian states. This has not been something that anyone in American politics seriously discussed until this campaign but it's now a mainstream Republican policy proposal opposed by many, to be sure, but mostly on practical grounds. When asked how we would know who to deport, Trump routinely says, "the police know who they are." Over the weekend he said "we are going to get rid of the criminals and it's going to happen within one hour after I take office, we start, okay?" His campaign manager says the details are "to be determined."

It doesn't end there, of course.  There's the promise to institute surveillance on Mosques, ban Muslims (recently changed to something he calls "extreme, extreme vetting) "take out" or otherwise use the families of terrorist suspects to extract information, reinstitute waterboarding and "much worse" (possibly even "chopping off heads" to fight fire with fire) summary executions, (sometimes with bullets dipped in pigs blood to scare the Muslims) and more. In a presidential debate he said he would order the military to torture and they would follow his orders. Days later he was forced by someone, we still don't know who, to admit that he could not unilaterally order troops to commit war crimes. (We also know that there is some recent precedent for getting around that ...)

You really don't need to know anything more than this to understand what a dangerous authoritarian Trump is:

Would I approve waterboarding? You bet your ass I would. In a heartbeat. I would approve more than that. It works. And if it doesn’t work, they deserve it anyway for what they do to us.

His obsession with police authority and intention to let them take off the gloves is well known going all the way back to the 1980s: "Let our politicians give back our police department the power to keep us safe. Unshackle them from the constant chant of "police brutality" which every petty criminal hurls immediately at an officer who has just risked his or her life to save an other's."  He has not changed his view even slightly since then.

However, there is yet another dimension to Trump's authoritarianism that's just as chilling and perhaps even more sinister when you consider how much secrecy surrounds the programs he's talking about. Daniel Marans at the Huffington Post reported:

“I hear the NSA maybe has the emails,” Trump said in a phone interview on Fox News’ “On The Record.” “A lot of people say the NSA would have the emails if they really wanted to get them.”

“Obviously they don’t want to get them,” he added. “They’re protecting her, they’re coddling her. And it’s the only way she could even consider running.”

“She knows what was on those emails and it was very, very bad,” he said. “And maybe somebody should, in fact, ask the NSA whether or not they have the emails.”

There were many reasons why civil libertarians were apoplectic at the revelation the NSA was storing all emails of American citizens when the Edward Snowden documents were published. Aside from general privacy concerns, the possibility of government authorities accessing the information without probable cause to suspect terrorism was alarming. But nothing was more threatening to the fundamental health of our democracy than the possibility of government officials accessing this information for political purposes. And here we have the Republican nominee for president in 2016 saying that the NSA is coddling his rival by failing to release copies of her personal emails to the public, emails he darkly insinuates must contain something "very, very bad." Indeed, he claims she couldn't possibly even run for office if they weren't protecting her.  The mind boggles.

But then Trump's mentor in life was Joseph McCarthy's chief henchman Roy Cohn, a man Trump once called his most loyal friend, "a man who would brutalize for you." Trump obviously also admired his friend's  use of government power to investigate people's personal lives for evidence of espionage and treason as well as personal sexual history and anything else worth blackmailing them over. He and McCarthy were best known for the smearing of people for alleged Communist sympathies which may have inspired Trump's own personal character assassination of President Obama back in 2011 when he stoked the birther movement into a full-fledged crusade. The result of that insane smear is that according to a recent NBC poll, a shocking 72% of Republicans still doubt that the president was born in the US.

And Trump has long had an affinity for Richard Nixon, the original "law and order" president who was disgraced and run from office for, among other things, using the power of the presidency to punish his political enemies. In fact, before Trump started suggesting that the NSA is covering for Clinton by failing to release their copies of all her personal emails to public, Trump also insisted that the Russian government must have them as well and he made his bizarre invitation to them to release them to the press which ,combined with his pleasure at the DNC hacking, had some disquieting echoes of the Watergate break-in itself.

This is a man who promises to arrest his opponent if he wins the presidency: "I will say this, Hillary Clinton has got to go to jail. Folks, honestly, she's guilty as hell." I'm not positive but I suspect that may be unprecedented in presidential campaign history. These are the rantings of an authoritarian dictator.

If he loses we will probably chalk up his candidacy to some sort of tear in the electoral matrix. But shouldn't it be just a bit troubling that these anti-democratic ideas are so enthusiastically supported by tens of millions of our fellow Americans?