Cindy Sheehan on Khizr Khan, Clinton's hawkishness, and why she votes third party

Salon interviewed Cindy Sheehan, whose son was killed in Iraq and who has since become a leading anti-war activist 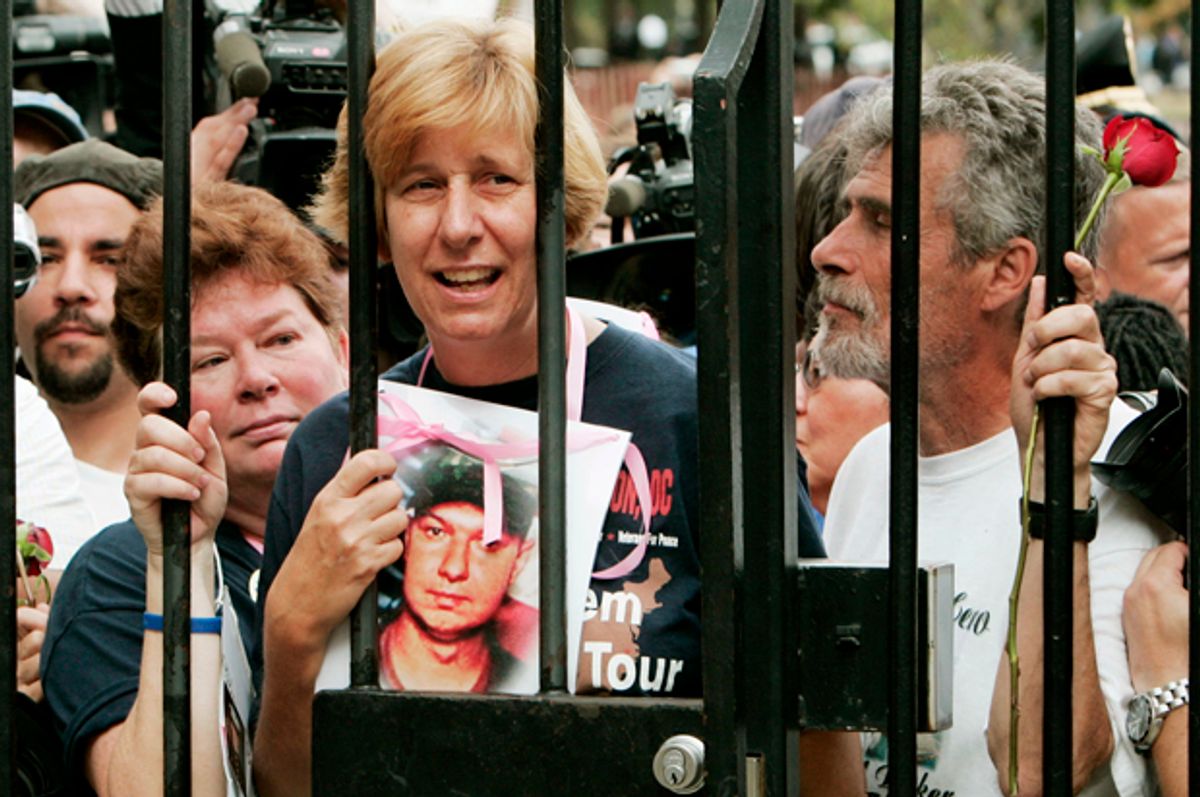 "The past eight years have been very lonely. There has not been much activism against the wars at all," Cindy Sheehan lamented.

"Obama has continued to expand George Bush's war of terror against the world, and there has been very little opposition to it," she added.

More than 12 years ago, Sheehan's son, a soldier in the U.S. Army, was killed in Iraq. The tragic loss transformed her. She was politicized, and plunged into anti-war activism. Sheehan soon became one of the most vociferous critics of then-President George W. Bush.

She still remains a committed activist today. Sheehan has been arrested numerous times for her activism, and for seven years, she has run the weekly radio show "Cindy Sheehan's Soapbox," which she describes as a "revolutionary talk show."

Salon spoke with Sheehan to discuss the recent controversy with Donald Trump and Khizr Khan, the 2016 presidential election and the ongoing wars waged by the U.S.

In the interview, Sheehan condemned Hillary Clinton, Donald Trump, the two-party system and the corporate media. She also spoke about her work with independent left-wing third parties.

In early August, Trump attacked Khizr Khan and his wife Ghazala, whose son, U.S. soldier Humayun Khan, was killed fighting in Iraq. The Khans, who are Pakistani Americans, had appeared at the Democratic National Convention in late July, where Khizr condemned Trump for his openly racist campaign.

Media pundits and politicians, including Jeb Bush, subsequently compared the incident to President George W. Bush's response to Cindy Sheehan, and argued Bush had been much kinder than Trump. Sheehan disagreed with the comparison, and argued people are whitewashing history for partisan gain.

"George Bush may have said publicly that I was entitled to my opinion, but his administration, his attack dog Karl Rove and the right-wing press thoroughly attacked me and tried to discredit me," she explained.

"It was rather nightmarish," Sheehan recalled. "How was that fine?"

She noted that even progressive news outlets and pundits like Democracy Now and Rachel Maddow favorably contrasted Bush with Trump.

"It's incredible. These people were absolutely opposed to George Bush when he was president, and now they're trying to paint his administration in a more favorable light. To me that is just amazing," Sheehan said.

While she strongly opposes Trump and his bigotry, Sheehan pointed out that his response to Hillary Clinton was not entirely wrong. After Khan's DNC speech, Trump tweeted, "Am I not allowed to respond? Hillary voted for the Iraq war, not me!" Sheehan said that, on this point, he is exactly right.

"Hillary Clinton not only voted for it, but she gave Democratic cover to George Bush for the invasion and occupation of Iraq that killed my son and killed the Khans' son," Sheehan stressed.

"Of course, Hillary Clinton, when she was senator and secretary of state, not just her rhetoric but her actions were very belligerent and hostile," she added. "To me, that's where the conversation should be."

As for Trump, "I feel like someone should take away his phone and not let him do any more tweets," she joked.

Salon previously reported that, while many media outlets amplified Khizr Khan’s patriotic sentiments, his criticism of U.S. foreign policy was overlooked. In an interview on MSNBC's "Hardball," Khan condemned U.S. wars, noting “we have created a chaos” and a “quagmire” in Muslim-majority countries.

"But instead of that being the emphasis, it's all about, 'He attacked a gold star family,'" Sheehan continued. "I think they're being used as pawns in the general election," she added of the Khans.

Hillary Clinton and the Democratic Party

Sheehan argued that the U.S. political establishment, in general, is very extreme. She said the media is stressing how extreme Trump is without adequately emphasizing how extreme Clinton is as well.

While Clinton might have toned down some of her rhetoric in this campaign, Sheehan continued, "her actual actions have been very questionable, especially when, like me, you're an anti-war activist."

Hard-line neoconservatives like Max Boot, Robert Kagan and more have endorsed Clinton for president, she stressed. Salon has previously reported on the slew of prominent right-wing figures who have thrown their weight behind Clinton.

"From the establishment, on down to grassroots Democrats, they either support her hawkishness, or don't care about her hawkishness," Sheehan said. "But if it were a Republican" who was this hawkish, "that would be a different story."

Clinton is one of the most belligerent figures in U.S. politics. Even The New York Times, which endorsed Clinton for president, acknowledged that the is more hawkish than her Republican rivals.

Sheehan has not always had such an antagonistic relationship with the Democratic Party. She accuses it of betraying her.

In 2006, Sheehan agreed to work with the Democratic Party. "They told me that, if I helped them regain control of the House, then they would help me end the wars," she explained.

"But then they regained power in the House and they didn't end the wars. So that's when I left the party," Sheehan continued. "I said after 2006 that I would never vote for another person who is pro-war."

In the 2016 election, Sheehan is on the state central committee of the Peace and Freedom Party, a socialist feminist third-party based primarily in California. She is a delegate for Gloria La Riva, the presidential candidate for the Party for Socialism and Liberation.

"Voting third party is a vote against the duopoly and against the war parties, which are the Democrats and Republicans," she said.

"I really sympathize with a lot of people who are, in a principled way, not in an apathetic way, saying that they are going to withhold their vote, for the top at least, and vote down-ticket."

If she did not have the opportunity to vote for the Peace and Freedom, Sheehan said she "would probably be a registered Green and working to pull that party to the left."

For Sheehan, opposition to war and imperialism is the most important issue. Hence, while she conceded that there were good things about the movement behind Bernie Sanders, she was critical of the Vermont senator for his support for "imperial policies."

Sheehan noted that Sanders' opposition to wars has not been consistent. He voted to authorize funding for the war in Afghanistan, supported the no-fly zone that led to the 2011 war in Libya and backed the 1999 NATO bombing of Yugoslavia.

Even Sanders' criticisms of Israel's crimes against the Palestinians, although important, were very mild, Sheehan noted. "Even mild criticism of Israel seems to pretty glaring coming from the establishment."

"Then he completely capitulated to the counterrevolution of Hillary Clinton,"she continued. "There is so much evidence that the DNC rigged the primaries her favor, of course, but he still completely and enthusiastically endorsed her."

"Demexit," the new movement of former Sanders supporters calling for progressives to leave the Democratic Party, is an exciting development, Sheehan said.

"I think anything to undermine either one of the two major political parties of Wall Street and war is a really good movement," she added.

She also applauded the Black Lives Matter and the new platform of the Movement for Black Lives, which, as Salon previously reported, condemns what it calls the “U.S. empire” and calls for the withdrawal of U.S. troops from around the world and reparations for past wars.

But Sheehan remains skeptical. "I've been around the block a few times, and I just see the closer we get to November, the more this fear-based 'If you don't vote Clinton you'll be handing the election to Trump' tactic will kick in."

Sheehan said it has been very hard continuing her activism under President Obama and a Democratic administration.

Liberals "let Democrats off the hook," she lamented. Sheehan blasted the U.S. drone assassination program, which has killed hundreds, if not thousands of civilians. She noted Obama's new wars have been "framed as humanitarian interventions."

"We saw eight years of an expansion of empire with very little opposition. If Clinton gets in, I can't see much changing. In fact, I just envision it getting worse," Sheehan warned.

She concluded, "All I know is that I'll still be working against it. If there's any kind of movement or anything, I'd be happy to support it and join but. But, like I said, it's been a very lonely eight years trying to keep the energy against these wars and against empire going."