It's official: This is the worst movie ending of all time

No, really — the third act of Matthew McConaughey's "The Sea of Trees" is an epic fail 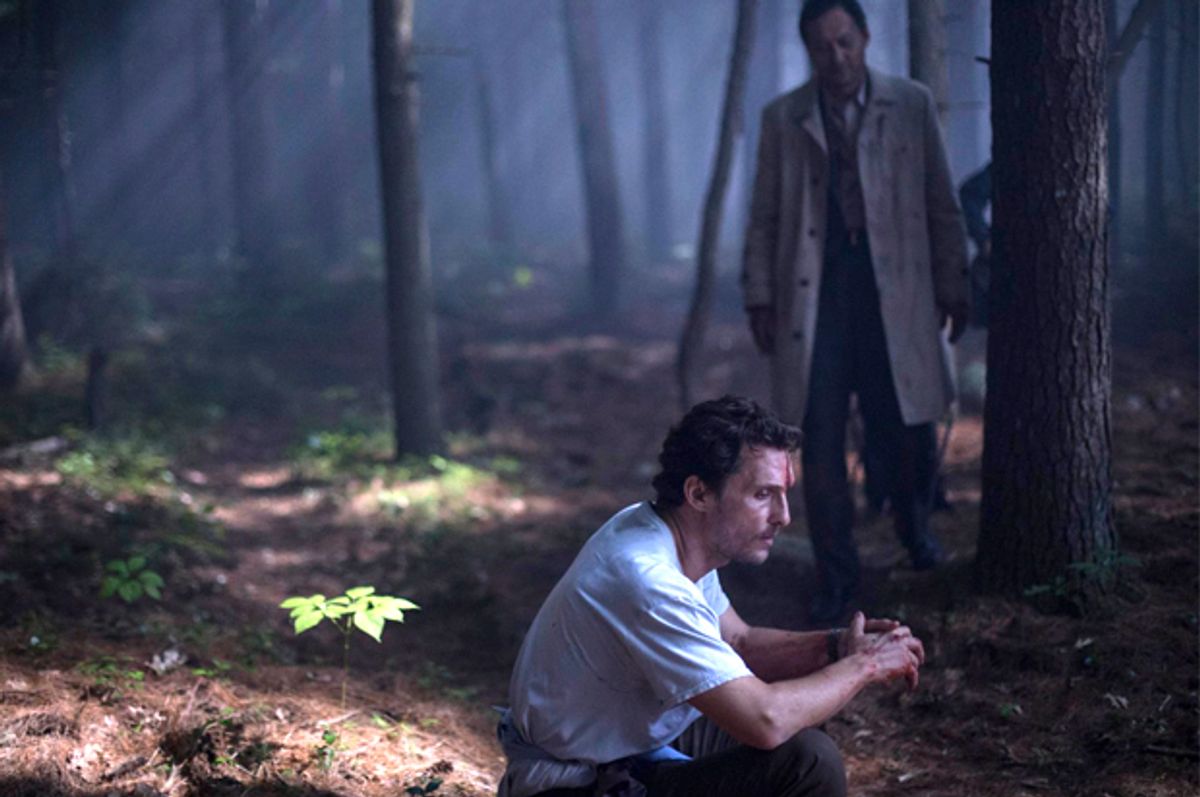 Matthew McConaughey and Ken Watanabe in "The Sea of Trees" (A24)
--

Note: This post heavily discusses the plot of “The Sea of Trees” and pretty much spoils the entire movie. If you have any intention of seeing it, don’t and read on.

If “The Sea of Trees” falls and no one is around to hear it, does it make a sound?

The latest directorial feature from Oscar-winning director Gus Van Sant (“Drugstore Cowboy”) is set to have one of the most underwhelming stateside debuts ever for a former Cannes contender. It premiered in just two theaters — with a wider rollout highly unlikely. When I saw it at New York’s City Cinema Village East, which caters to microbudget indies that other chains won’t pick up, there were just 10 people in the theater.

Let’s do a word problem: If “The Sea of Trees” averages that level of attendance at five shows a day in two theaters, how much does it make on opening weekend? Just $4,500. (Official weekend numbers have yet to be released.)

This is a strange fate for a film once dogeared as a major Palme d’Or contender.

“The Sea of Trees” coasted into the French fest on a tidal wave of buzz, boosted by its impressive pedigree. Van Sant has been nominated for two Oscars — “Good Will Hunting” in 1997 and in “Milk” in 2008 — and the film's star, Matthew McConaughey, won one. McConaughey has become a critical darling in recent years with a string of well-received performances in films like “Magic Mike” and “Interstellar.” Meanwhile, his “Sea of Trees” co-star, Naomi Watts, once starred in the best movie of the century.

Upon its debut at Cannes, Van Sant’s film was booed by festivalgoers, but it wasn’t just the notoriously hard-to-please Francophones that hated “The Sea of Trees.” Nobody liked it. The film earned one of the lowest scores in the history of the Cannes Film Festival; the screen jury ranking, which polls critics on their thoughts about the movies they saw, gave the film just a 0.6 rating out of 4. That’s roughly the equivalent of a D-.

If you’re wondering why “The Sea of Trees” sat on the shelf for an entire year before being dumped into theaters, it’s because the movie is not just bad. It features one of the worst endings in movie history — with a third act so jaw-droppingly tasteless that it’s a shitty miracle. Some movies dare not have their secrets spoiled. But should you, as some sort of a twisted punishment, be forced to watch “The Sea of Trees,” you will want to tell everyone you know about it — even strangers on the street.

That’s the thing about a movie this terrible. It induces a kind of madness.

“The Sea of Trees” is like Nicholas Sparks meets “The Twilight Zone,” imagining a world where helpful ghosts appear disguised as other ghosts in order to prevent people from killing themselves. (They could start by keeping them from watching this movie.)

After the death of his horrible, cartoonishly shrewish wife (Watts), the grieving Arthur Brennan (McConaughey) visits Aokigahara, Japan’s notorious Suicide Forest, after googling “the perfect place to die.” Holding a mysterious envelope, he has the goal of swallowing an entire bottle of pills.

Arthur instead happens upon the ailing Takumi (Ken Watanabe), who claims that he was driven to commit suicide after losing his job. He can’t go home to his wife and daughter in shame. Arthur is strangely drawn to Takumi, whom he offers to help find his way out of the forest. The two men, however, are lost in a wooded area so vast and unnavigable that travelers who wish to exit commonly tie a string to a tree to help them find their way back.

While Arthur and Takumi wander on their journey to find food and help, Arthur explains that he and his wife, Joan, once loved each other very much, until his inexplicable infidelity came between them. The couple began to argue constantly — he criticized her drinking and she wondered why a man of his talents couldn’t get a better-paying job. Arthur is an adjunct professor at a small college, and Joan, a prolific real estate agent, pays the bills in between swigs of merlot.

The two briefly reconcile when it’s revealed that Joan has brain cancer. An ominous stream of blood dribbles down her face as the overwrought soundtrack tells us what we already know: It can’t be good.

The worst aspect of “The Sea of Trees” is open to debate. Is it the maudlin score, which sounds like a depressed 8-year-old practicing for her first piano recital? Maybe it’s the wooden performances, in which a talented, accomplished group of actors appear to have recently undergone shock-therapy treatments? But for my money, it’s the film’s bevy of M. Night Shyamalan-style twists, which come fast and furious in the final half an hour.

Astute audience members may be able to spot the first twist barreling down the turnpike like a car with no brakes.

Arthur's wife Joan manages to survive an operation to remove her tumor, and the doctor gives her a clean bill of health. The mass wasn’t malignant. Taking a page from the playbook of the “Final Destination” movies, it turns out that Joan wasn’t able to cheat death so easily. Following the surgery, she rides home — bald and beaming — in the back of an ambulance. Arthur, happy to have a second chance with the woman he loves, drives directly behind the vehicle, smiling and waving optimistically.

Their plans for a happily ever after are thwarted when the ambulance is T-boned by a truck running a red light. Joan is killed instantly.

The manipulation doesn't stop there. Arthur tells Takumi that his biggest regret is not that he never got the opportunity to make it right with his wife. He felt like he never knew Joan to begin with. When a group of mourners at the funeral claim to have sent Joan a copy of her favorite book while she had been in the hospital, Arthur realizes that he has no idea what it was. Because he is a terrible husband, Arthur also doesn’t know her favorite season or her favorite color — basic information that he should probably know about the person with whom he has spent 20 years of his life.

This sets the stage for the film’s Hail Mary of a twist, which is so absurd it needs no exaggeration.

To get help, Arthur must leave Takumi behind. He is rescued by a group of forest rangers and taken to the hospital. When Arthur insists that they go back for his friend, a social worker informs him that no one else entered Aokigahara that day. He knows this is impossible.

In order to find Takumi, Arthur returns to the forest, where he discovers that the man’s body is missing. Because Arthur apparently has a copy of the screenplay in his back pocket, he begins to put the pieces together: Takumi once told him that Aokigahara acts as a purgatory for lost souls passing to the other side. When his friend explained that Arthur’s wife was still with him, the avowed atheist viewed it as a metaphor — the kind of thing that people say when someone you love dies.

But unfortunately, Takumi was being literal.

The friendly Japanese man is actually the spirit of his dear departed wife, who pretends to be Takumi order to communicate with him from the afterlife — and thus help him find peace. This tactic is extremely confusing. If you died and hoped to get in touch with your husband, wouldn’t you appear as yourself? Why would you choose to reveal your true identity through a series of cryptic clues, like a metaphysical puzzle? Wouldn’t just saying, “Hey buddy; I’m your dead wife” save time?

Ghost Joan, however, didn’t rise from the dead to adhere to logic. She came to deliver knowledge. The first of Arthur’s questions is answered when he opens the aforementioned envelope to reveal “Hansel and Gretel,” Joan’s favorite book. In a flashback, he remembers that Takumi compared their adventure to the classic Grimm fairy tale, in which the titular characters leave a trail of bread crumbs to find their way home.

Believe it or not, the movie actually gets worse. When Arthur returns to the U.S., he meets with a student, Eric (Jordan Gavaris of “Orphan Black”), who just so happens to speak Japanese. This is a movie in which each character is on hand to provide helpful information at the exact right moment. Eric spies the names of Takumi’s wife and daughter scribbled on a piece of paper and helpfully translates. He says they mean “winter” and “yellow” — which, you guessed it, is the name of Joan’s favorite season and color, respectively.

It’s kind of amazing that no one vetted the fact that calling a Japanese character “yellow” is extremely culturally insensitive, but in a movie as bad as “The Sea of Trees,” accidental racism is the least of its problems.