Salon on the trail: With Trump's unpopularity sinking him in Virginia, Pence came to the exurbs to shore up support 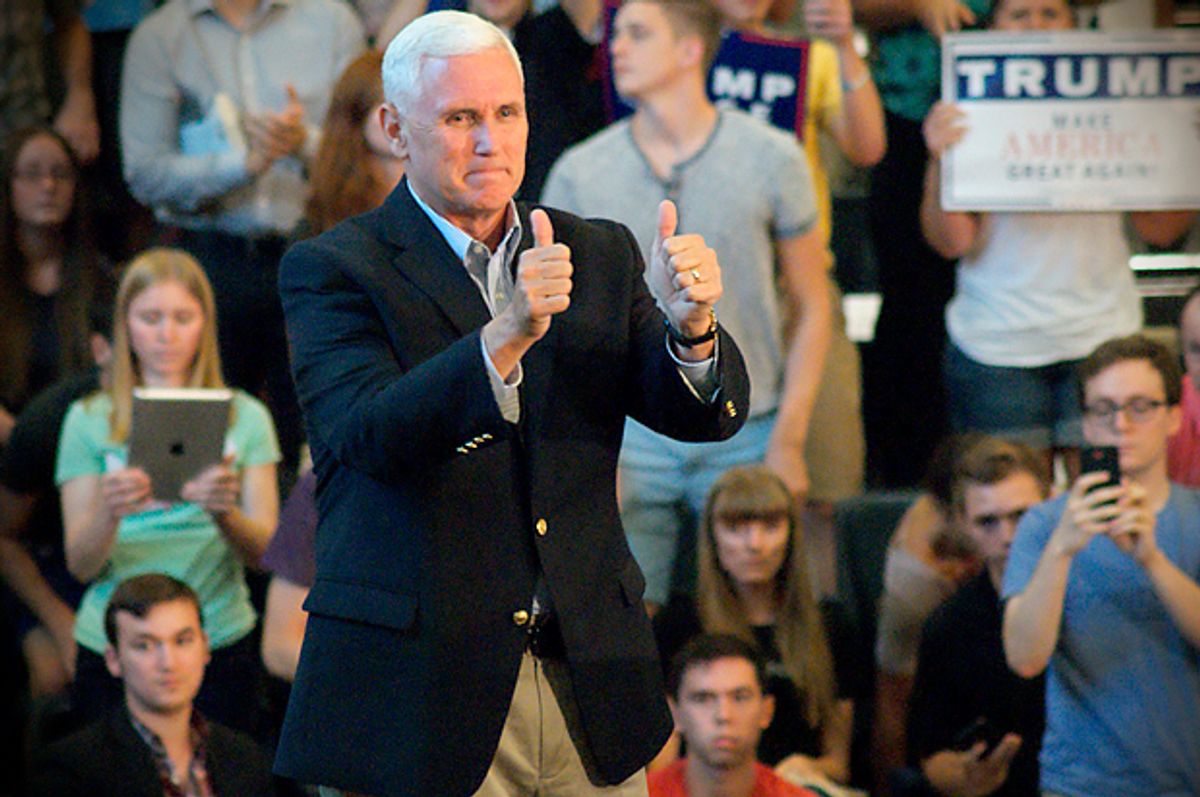 Indiana Gov. and Republican vice presidential nominee Mike Pence was in Purcellville, Virginia, this past weekend, and he was there to speak to a very specific type of voter. The Donald Trump-Mike Pence ticket is, as of this writing, getting blown out in Virginia, and the man at the top the ticket is a big reason why. The personal unpopularity of the Republican Party's presidential nominee in the state – 56 percent strongly unfavorable, per the most recent Washington Post poll – is killing his chances. Of particular concern for Trump and Pence is the fact that they’re polling behind Hillary Clinton in the exurbs of northern Virginia, counties that former Republican presidential hopeful Mitt Romney carried fairly comfortably in 2012 on his way to losing the state by 4 percentage points.

And so Mike Pence, with his bland Midwestern affect and relentlessly familiar Republicanism, came to Loudoun County on Saturday to speak to a couple hundred Virginians to try to get them firmly behind Donald Trump. He has some work to do on that front, but the Trump-negative people who showed up on Saturday seemed willing to let Pence convince them.

“He’s annoying, for sure,” David, an engineer from Prince William County, said to me about Trump. “It keeps him in the spotlight.”

On the other hand,  Pence was much more to David's liking. “He has a much better tone,” he said, and “presents the ideas without trying to almost sound like he’s deliberately trying to be offensive.”

Gus, a Honduran immigrant who disliked Trump but couldn’t imagine himself voting for Hillary, was open to giving Pence the opportunity to make the case for his running mate. “I just want to see what he says,” Gus told me. “Maybe that will make a change.”

One thing that’s certain is that Trump’s new attempts to do outreach to black voters are having a very positive impact on his base of white supporters, who think Trump is going about it precisely the right way. “He wants to help the black and Hispanic community,” one Loudoun County retiree said of Trump. “He should have started [reaching out to black voters] a long time ago, and I just hope it’s not too late.”

A Leesburg woman I spoke with explained that she backs Trump’s outreach efforts because people don’t know “the history of the Democratic machine” in Virginia relating to Jim Crow laws and institutionalized racism and “it would behoove young African-Americans to study that period.”

When it came time for Pence to take the stage in the Patrick Henry College gymnasium, it was immediately clear that the Indiana governor has a much better sense of political geography than his running mate. During his own rally in Fredericksburg the previous week, Trump devoted many long minutes to an extended harangue on coal, a fading industry that is centralized in a faraway part of the state. Pence, on the other hand, barely touched on the issue, mentioning the “war on coal” only twice in passing. Instead, Pence made his pitch mainly about national security, tax cuts and deregulation and the importance of nominating conservative Supreme Court justices — the sort of stuff that Republicans from that wealthier county that is part of the Washington, D.C., metropolitan area want to hear about.

Pence also made a point on Saturday of bringing up Trump’s attempts to woo black voters. “We hear the other side already bringing out the politics of division,” Pence said. “It’s really remarkable, after Donald Trump spent the last two weeks reaching out to minorities across this country.”

Two weeks! Two whole weeks! His counterexample to the “politics of division” was the fact that Trump has spent a solid fortnight not speaking exclusively to the concerns of white voters. That same morning, Trump’s “reaching out” took the form of a tweet leveraging the tragic shooting death of NBA player Dwyane Wade’s cousin to boast that “African-Americans will VOTE TRUMP!”

Citing the “politics of division” was Pence’s manner of referring to Hillary Clinton’s speech attacking Trump for his frequent and explicit appeals to the online racist right. “Hillary Clinton actually decided to attack the very intentions and characters of millions of hardworking Americans who long for a better future,” was how Pence described Clinton’s speech describing Trump’s overtures to the bigoted and paranoid political fringe.

But that’s why campaign staffers sent Pence to northern Virginia: to describe Trump campaign in a way that gives things a positive spin yet is cut off from anything resembling reality. They want Pence to be the living embodiment of dull-ass Republicanism, a sopping wet blanket who will make a show of throwing himself on the Trump trash fire. The pitch Pence served up was expressly designed to make nervous exurban Republicans feel better about pulling the lever for their massively unpopular nominee: You’ll get your tax cuts, you’ll get your defense spending, you’ll get your Antonin Scalia clones on the Supreme Court. Oh, and by the way, Trump’s not racist.