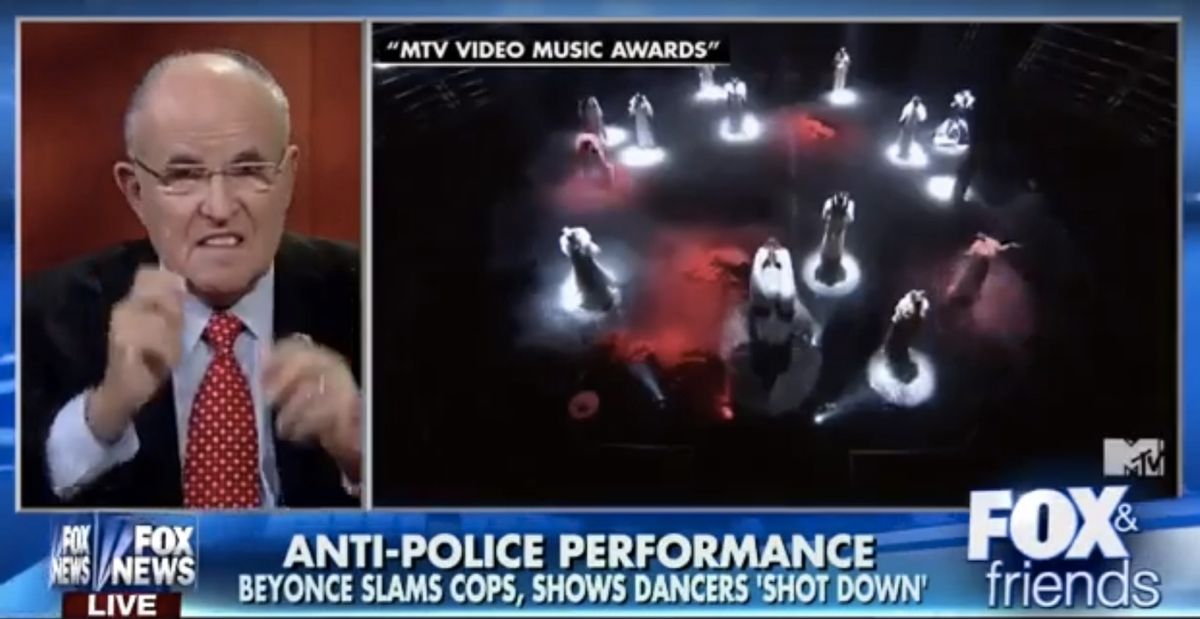 Fox News found itself in a complete tizzy Monday morning after a weekend of overt political protest and performance from two of America's biggest African-American stars.

"I am not going to stand up to show pride in a flag for a country that oppresses black people and people of color," Kaepernick said after the game. "This stand wasn’t because I feel like I’m being put down in any kind of way. This is because I’m seeing things happen to people that don’t have a voice, people that don’t have a platform to talk and have their voices heard, and effect change," he further explained on Sunday.

On Sunday night, Beyoncé performed 15-minutes of her visual "Lemonade" album, including graphic poetry about the black experience in America.

Monday morning, Fox News was left in a complete disarray from the onslaught -- a reminder that racism does exist in America, and from celebrities during the weekend, no less!

"Her dancers were circling around her and one by one, they fell to the ground, and there were red lights underneath them. And that was supposed to symbolize cops killing black individuals," "Fox & Friends" co-host Ainsley Earhardt explained to former New York City mayor turned prominent Black Lives Matter critic Rudy Giuliani, before asking him if Beyoncé's offended him.

"It's a shame," Giuliani remarked, echoing his critic of the superstar's NFL Super Bowl halftime performance earlier this year. "It’s a shame."

“I saved more black lives than any of those people you saw on stage,” he added.

"And Beyoncé is an extremely popular and powerful performer, and when she does stuff like that, that message to the next generation is pretty indelible," co-host Brian Kilmeade chimed in.

The "Fox & Friends" host also asked Mr. 999 himself, Herman Cain, to comment on Beyoncé's "mock dance scene where African-American dancers were getting shot and the light turned red as if cops assassinate black people at a dizzying rate" (emphasis mine):

Later, on Fox News' "America's Newsroom," co-host Gregg Jarret would go on to complain that Beyoncé brought the so-called "Mothers of the Movement, whose children had died while in police custody, as her guest to the MTV award show.