100 percent bananas? Meet the fruitarians, who believe we can live on raw fruit alone

Followers of fruitarianism believe the key to health is a diet that's almost entirely fruit. Some nuts allowed. 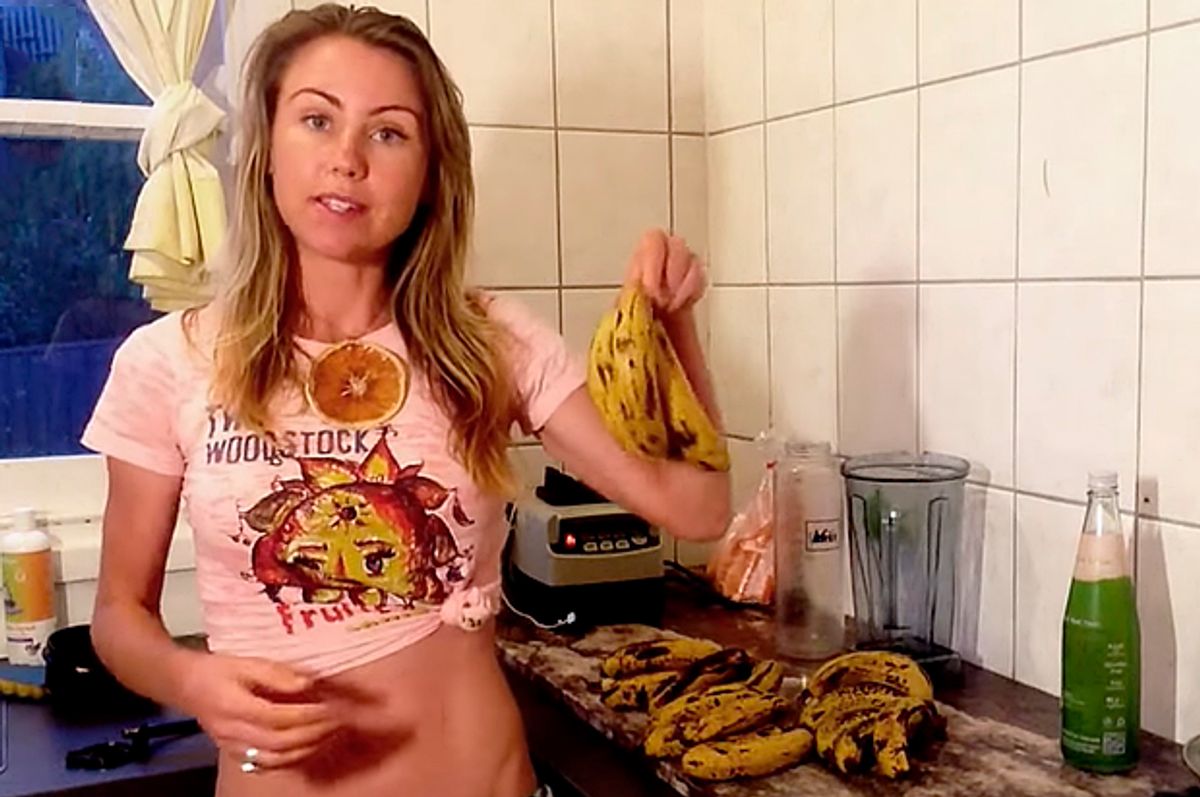 Last week almost 600 people trekked to the Adirondacks to upstate New York’s Camp Walden, the site of the annual Woodstock Fruit Festival. If the name Woodstock evokes indulgent images of hedonism and hallucinogens, think again. The only type of high at this gathering is a fructose high. The festival, dubbed the “Super Bowl of Health, Fitness, and Social Events,” is an annual assembly of fruitarians, health-obsessed followers of a diet that some call revolutionary and others consider a new extreme eating cult.

The eight-day Woodstock Fruit Festival was started in 2011 by Michael Arnstein, a lithe 39-year-old former ultra marathoner who had adopted a fruit-based diet three years earlier. Arnstein has credited his practice of eating almost entirely fruit (as much as 30 pounds a day, as he told the late Details magazine in 2012) to improving his eyesight, lowering his body fat and staving off illness. As a competitive athlete, he had originally tried the diet to improve his stamina and cross the finish line faster, and it worked. And within a few months, he had shaved 17 minutes off his previous personal best time in the marathon. Now Arnstein is a cornerstone figure in the world of fruitarianism, most often considered raw veganism at its most extreme, the kind of diet that makes hard-core paleo and vegan regimens seem like a fast food binge.

While there’s no single way to be a fruitarian, generally the diet requires making 75 percent or more of your daily food intake raw fruit, which includes everything from acid fruits like citrus and pineapple, to sweet fruits like bananas to various dried fruit. The consumption of seeds and nuts, though tolerated, is frowned on by hard-liners.

After launching his informational site The Fruitarian (which is geared toward athletes like himself), Arnstein founded the Woodstock Fruit Festival to connect with like-minded fans of fruitarian eating. The festival’s attendance has grown from 150 people in its inaugural year to almost 600. The fest might be thought of as adult summer camp for fruit fanatics or, say, a sweet, wholesome, unpeeled Burning Man (sans salt, alcohol or caffeine). With some exceptions, the crowd is made up of mostly lean, dreadlocked drum circle leaders and aspiring yogis with whimsically painted faces. And though you don’t have to be in aspirational shape to attend, it helps.

Activities include everything from the expected exercises (yoga, meditation) to lectures (for example, “Are You an Angry Vegan?” and “How to Use the Right Herbs and Supplements to Overcome Nutritional Deficiencies and Thrive in Your Raw Food Lifestyle”), and social activities (late-night dance parties and speed dating but no Bananagrams). One of the festival’s most popular events is the “Midnight Durian Vampire Party,” a near-Dionysian ritual where carts of the pungent Durian fruit are wheeled out in the middle of the night to ecstatic revelers like the man who swore that “your body craves that sulphur flavor. . . . If there’s something you miss eating, durian starts to taste just like it.”

Fruitarianism is hardly a formal practice. It can be traced back to 1918, when an Australian newspaper wrote about it, and Steve Jobs tried it out in the 1970s when it first started gaining a following in the U.S. But the trend didn’t take off until 2006, when Douglas Graham self-published "The 80/10/10 Diet," which posits that a person's consumption of 80 percent of his or her calories from fruit-based carbohydrates, 10 percent from fat and 10 percent in protein will result in weight loss, increased energy and mental clarity and all around better health.

The uncomplicated nature of the fruitarian diet (no difficult to find ingredients, cumbersome calorie counting or nutritional equations) and the fact that its staples taste good and available at every supermarket make it stand out among diet fads.

“The fruitarian diet is based on what we're designed to eat as opposed to a diet that will produce health improvements,” Don Bennett, director of the Health 101 Institute, told Salon. Bennett has been following an all-fruit diet for 25 years and is a mainstay at the festival, counseling others on the power of fresh produce.

“Personally, my body was able to heal permanent nerve damage and my vitality increased noticeably,” Bennett added. “Those who . . . have transitioned to the diet and who are doing it successfully don't tend to go back to what they once ate. So the recidivism rate is far lower than any other diet. It provides the best odds of never getting a serious diagnosis.”

That may not matter to the more than 700,000 people who follow the notorious Freelee the Banana Girl on YouTube. Freelee, who has claimed to eat as many as 51 bananas a day, has brought attention — and controversy — to the movement in recent years. One of the most recognizable figures of fruitarianism, Freelee is regularly accused of bullying others into adopting the lifestyle. She is a social media star, yes, but she has her share of haters.

Fruitarianism has been criticized for its extreme and cultish nature. It’s not surprising perhaps that it has begun to flourish at a time when orthorexia, a recently identified eating disorder characterized by an unhealthy obsession with healthy eating, has moved into the vernacular.

Some experts have expressed concerns over what seem like obvious nutritional deficiencies. “Don't think a fruitarian diet is a safe or beneficial eating plan,” LeeAnn Weintraub, a Los Angeles-based registered dietitian nutritionist told Salon. “Although fruit is healthy, it’s primarily carbohydrates, and the body requires protein and fat, as well as micronutrients like iron, calcium and some B vitamins, which cannot be obtained in adequate amounts from fruit alone."

"I’m also concerned about the high sugar content of this kind of diet without the balance of protein and healthy fats,” she said.

Ashton Kutcher experienced this firsthand, when he found himself in the hospital after adopting a fruitarian diet to play Steve Jobs in the 2013 biopic “Jobs.” Kutcher told reporters, “My insulin levels got pretty messed up and my pancreas kind of went into some crazy, the levels were really off and it was painful. I didn't know what was wrong."

None of that seems to make a difference to the devotees who eagerly consumed 100,000 pounds of raw fruit at the Woodstock Fruit Festival. To be sure, the fruitarian movement certainly offers more exotic retreats for the ultra committed like Costa Rica. But if you're intrigued at the prospect of spending a week opening a thousand coconuts, peeling twice that many bananas and bonding over the joys of a bottomless fruit salad bar that never closes, the Woodstock Fruit Festival is now taking reservations for next year.