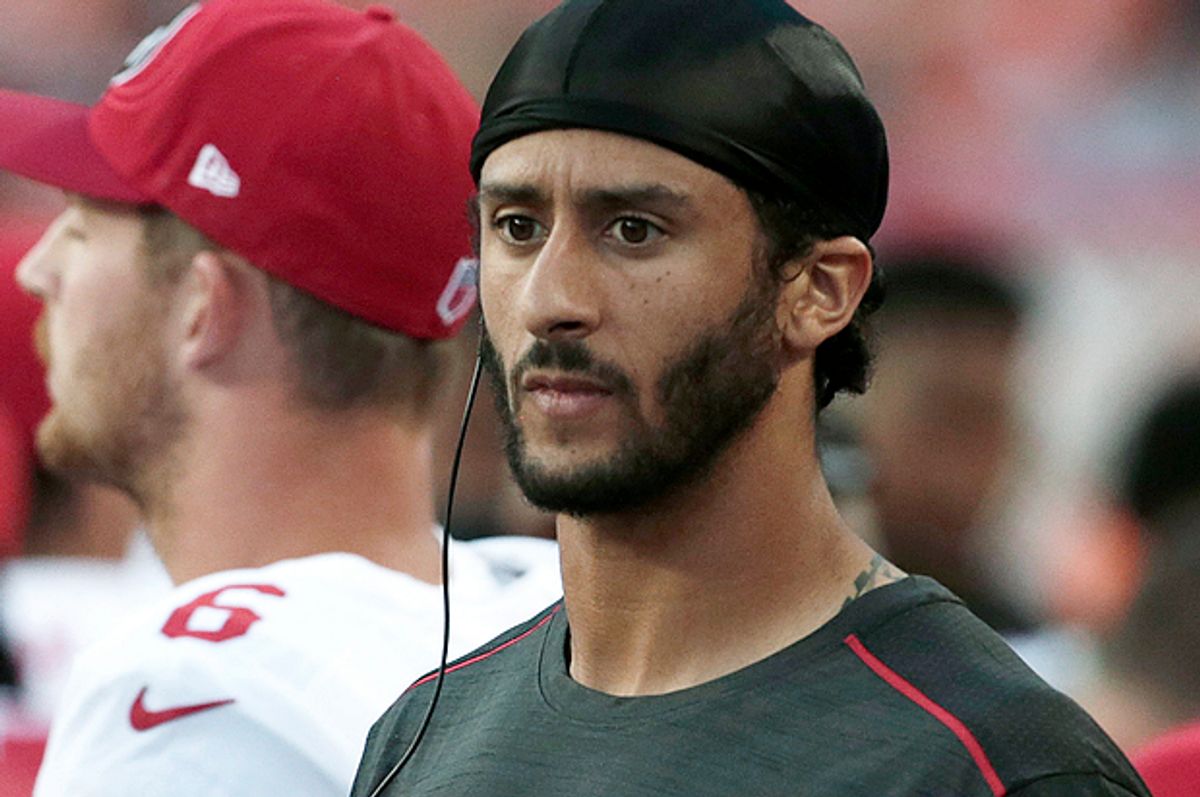 Before last Friday’s preseason game with the Green Bay Packers, San Francisco 49ers quarterback Colin Kaepernick refused to stand up while the American national anthem was played. This is not the first time that he has chosen to remain seated while the song was played at an NFL game. Kaepernick explained his decision in an interview with NFL Media’s Steve Wyche as “I am not going to stand up to show pride in a flag for a country that oppresses black people and people of color. To me, this is bigger than football and it would be selfish on my part to look the other way. There are bodies in the street and people getting paid leave and getting away with murder.”

Kaepernick has said that he will continue his protest for the entire 2016 NFL season.

Colin Kaepernick’s act of political protest has been met with a range of responses. Some of Kaepernick’s teammates are publicly supportive of his decision to exercise his constitutionally-protected right to free speech while others believe that he is acting improperly. On social media and elsewhere, those individuals who are sympathetic to the Black Lives Matter movement and its struggle against police thuggery and violence have been enthusiastic in their endorsement of Colin Kaepernick’s actions. In the same digital spaces, Kaepernick’s protest has been received with hostility, anger, rage, and racist vitriol.

The controversy surrounding Colin Kaepernick’s comments are a reminder of how sports are a metaphor for social and political life in the United States. For example, in the NFL black players dominate on the field but are grossly underrepresented as head coaches and in other senior positions. The NFL’s teams — with one exception — are all owned by white men. Likewise, white men are grossly over-represented in the National Football League’s media, marketing, and merchandising machine. Women are present largely as cheerleaders, sex objects for the titillation of men. Old racial stereotypes still color how football players are described by sports analysts and fans. Black football players have “natural talent” and “raw physicality”; white football players “work hard” and are “intelligent.” As such, the notion that African-Americans possess the mental acumen necessary to play as a starting quarterback in the National Football League is still a relatively new one.

Ultimately, as is common in most professional sports in the United States, black and brown athletes generate huge profits for the white men who own the teams and leagues. This is business as usual in America: black and brown bodies and white profits are a feature of the global color line that predates the founding of the country.

The public conversations about Colin Kaepernick’s decision reflect a moment of particularly acute anxiety in post civil rights era America. Barack Obama, the country’s first black president is soon ending his tenure in office. Ethnic and racial demographics are in flux as white Americans will supposedly no longer be the “majority” racial group in the near future. White racial resentment and overt bigotry are resurgent and assertive. Young people, liberals, progressives, and people of color resist and struggle to make a more inclusive, fair, cosmopolitan, and truly democratic society while conservatives pursue a revanchist dead-end white identity politics that is focused on “taking back our country” and “making America great again.”

Out of this stew of conflicting ideas and language, Colin Kaepernick has been confronted with retorts which suggest that because he is a multimillionaire athlete that somehow he is incapable of understanding racial oppression and injustice. This is lazy thinking that flattens the complexities of history and human experience. Kaepernick dismissed it as:

There have been situations where I feel like I’ve been ill-treated, yes. This stand wasn’t for me. This stand wasn’t because I feel like I’m being put down in any kind of way. This is because I’m seeing things happen to people that don’t have a voice, people that don’t have a platform to talk and have their voices heard, and effect change. So I’m in the position where I can do that and I’m going to do that for people that can’t.

Some voices are fixated on how Colin Kaepernick is a black man born to a white mother and then raised by two adopted white parents, and how this makes him either unqualified or incapable of empathizing with Black America’s continuing struggle for social, economic, and political equality. This is moribund and bankrupt logic that locates personal identity, ethics, and morality in biology and race essentialism. Colin Kaepernick is a black man raised by a white family who gave him the life skills necessary to make a principled stand about the need to protect all peoples’ human rights and dignity. What is most important here is that Kaepernick’s parents raised a man of conscience.

The anger at Colin Kaepernick’s decision to not stand for the American national anthem also cannot be easily separated from the rise of Donald Trump’s and his supporters’ militant nationalism. Professional sports are a space where flags and nationalism and militarism effortlessly comingle. This makes sports fans especially prone to passion and unreflective thought — especially those conservative-authoritarians whose sense of self is deeply attached to “God, flags, and guns.”

The hostile response to Colin Kaepernick — as well as other black athletes who have decided to publicly show their support for Black Lives Matter — is a reminder of what appears to be a deep overlap between the audiences for sports talk radio and right-wing hate radio.

Colin Kaepernick’s act of protest is but one more installment in a long, rich, and honorable history where African-American (and other) athletes  fight against social and political injustice. Jessie Owens defeated the Nazi “supermen” and exposed the lie that is and was white Aryan superiority. Jackie Robinson used quiet dignity and persistence. Jack Johnson did so with his martial prowess and utter disregard for Jim Crow’s rules about black humility and subjugation. Muhammad Ali used his mouth, quick wit, personal principles, faith, and fists to be black and beautiful both in the boxing ring and outside of it. Tommie Smith and John Carlos raised their clinched fists during their medal ceremony at the 1968 Olympics in Mexico City, affirming how black power was a mantra, dream, and political ideology.

Colin Kaepernick, like his predecessors, is being reminded (as though he had somehow ever forgotten) of how many Americans view sports as pleasure, distraction, fun, and play — and essentially and fundamentally apolitical. Of course, the latter is not true. The lives of black and brown people are politicized from (before) the moment of birth. One of the fictions and privileges of Whiteness is the luxury to imagine and pretend that apolitical spaces—such as the football field or basketball court — exist. Colin Kaepernick, several players in the Women’s National Basketball Association, Venus and Serena Williams, LeBron James, and other black athletes who stand with and for Black Lives Matter refuse to facilitate the lie that sports are apolitical. Too many (white) sports fans love to watch black and brown people engaged in stupendous physical feats. They also prefer that those same black and brown athletes exist only for the pleasure of the (white) fans—and when speaking only do so on “comfortable” topics.

There is anger and hostility towards Colin Kaepernick because too many people confuse buying a ticket (or sports jersey or team hat) with owning the political and social conscience of a given player, when in reality the price of a ticket has purchased neither.