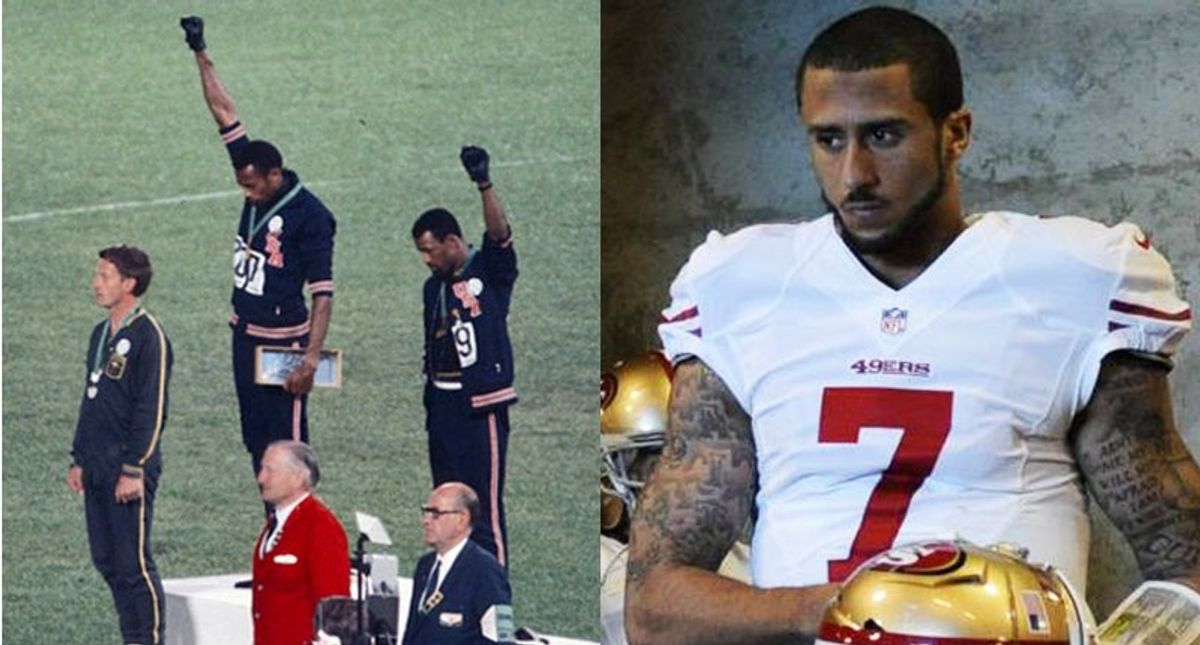 Days after refusing to stand during the national anthem, for a third week in a row, San Francisco 49er Colin Kaepernick is still facing a torrent of backlash for his silent protest against what he called "a flag for a country that oppresses black people and people of color."

While former teammates and coaches are lining up to denounce Kaepernick's decision, at least two iconic African-American athletes are rushing to support the athlete's political activism.

At the 1968 Mexico City Olympics, American track athletes Tommie Smith and John Carlos won the gold and bronze medal, respectively, for the 200-meter dash. When the two black athletes stepped onto the podium, they waited for the American anthem to begin before they boldly raised their arms with black gloves, in protest of racism in America.

That iconic image has long stood for the power of black athletes, some of America's biggest celebrities, to quietly impact political discourse.

Appearing on CNN Monday evening, gold medal winner Smith called it "utterly amazing ... the need to shadow something that came to fruition 48 years ago."

Smith explained to Canadian magazine Maclean’s that he understands and supports Kaepernick's protest:

Since he was very comfortable in society, some believe he should have kept quiet and received the benefits of professional football and leave his humanhood behind. I don’t feel that way. Colin’s made a very important and a non-volatile statement about the realities of the society in which he lives. I congratulate him and his beliefs of total parity.

Smith said he faced violent backlash from Americans after the 1968s games that sounded awfully familiar to Donald Trump's response to Kaepernick. The GOP presidential candidate suggested that the black quarterback "should find a country that works better for him."

Smith recounted receiving threatening telephone calls and notes that read, “Go back to Africa. Here is a ticket.”

"They would send mock tickets with rocks through the window," he recalled. "One rock nearly hit my son. I was married when I was a senior in college, and a rock missed my son by an inch as he laid in his night crib, sleeping."

"I’m 72 now," Smith noted. "You’ve got two people here that are fighting for the same thing, a half a century apart."

“We’re still dealing with issues in society, trying to make it a better society,” teammate John Carlos told The Atlanta Journal-Constitution on Monday. “We’re still just asking for understanding about tolerance and justice for all people.”

“When you sit back and think about the issues that confronted him, it took a tremendous amount of courage for him to do that,” Carlos said. Carlos expounded on his views during an interview on sports radio station 95.7 The Game:

Well, you know, my view of him, sitting down for the National Anthem is the same as Rosa Parks sitting on the bus, refusing to give up her seat in the front. Rosa Parks was making a statement. Kaepernick is making a statement as well. Colin’s making a statement as well. And the only way people are gonna come to the table to have some dialogue about this is when people such as he or Rosa Parks, or Tommie Smith and Peter Norman and John Carlos, Muhammad Ali, we come out to make these statements to encourage other people to raise their voices enough that people will have some common discussion about the issues, the social issues that’s been pushed under the rugs for eons. It’s time to come to the table to try and negotiate these ills out of society.