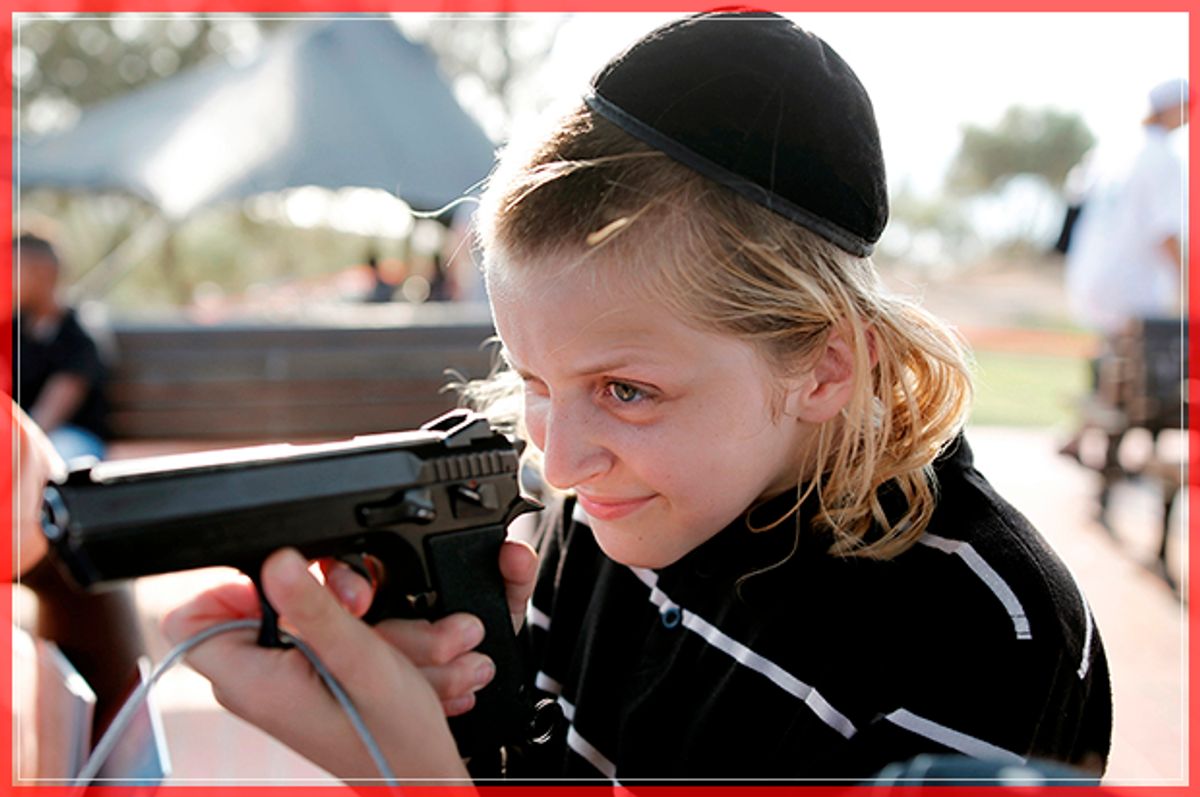 A boy plays with a gun during an "open day", exhibiting various policing skills and equipment to the public, in the southern Israeli city of Ashdod, August 29, 2016. REUTERS/Amir Cohen - RTX2NIRU (Reuters)
-- Most of the world periodically (and conveniently) forgets about Kashmir, a long-disputed region in the mountains of northern South Asia that is currently divided between three countries. God knows there are enough other regional conflicts to worry about. But for Indians and Pakistanis, along with observers concerned about the possibility of a globe-shifting war between two nuclear powers, the unresolved question of Kashmir looms large indeed. Until British withdrawal and the partition of India in 1947, the principality of Jammu and Kashmir was a Muslim-majority state ruled by a Hindu aristocracy. Ever since then, India and Pakistan have both claimed sovereignty over the entire region of 16 million people, while in practice dividing the territory in a long-running low-level conflict fed by religious extremism on both sides. (To make matters worse, China has occupied a chunk of the remote northeast since 1962.) No peaceful settlement seems even remotely possible in any of our lifetimes. Mount Sinabung in North Sumatra, a highly active volcano erupted on Friday, forcing evacuations. Days later it was still spewing ash, but for these kids, it seems like business (or perhaps playtime) as usual, near a peculiar backdrop. If that was the U.S., they'd probably try to see if any Pokemons were hiding in the ash.

Ashdod, Israel   Amir Cohen/Reuters
A boy plays with a gun during an "open day," exhibiting various policing skills and equipment to the public The first thing that popped into my mind when looking at this is that famous Diane Arbus photograph of a child holding a hand grenade in the park. Of course, that weapon was just a toy... To the delight of history buffs, architecture worshippers and curious folks, London’s 17th-century skyline lives again. The wooden outlines of the city have been rescued from history’s dustbin and re-created by David Best in a 360-foot-long sculpture along the Thames. Much of this skyline vanished upon the start of the Great Fire of 1666 at the Pudding Lane home of a royal baker, per History.com. But don’t grow too attached: The horizon view will be engulfed in flames again, for this weekend’s London Burning festival. While pyrotechnics always commands a crowd, the event offers a teaching moment: Fire safety prevention is always timely.