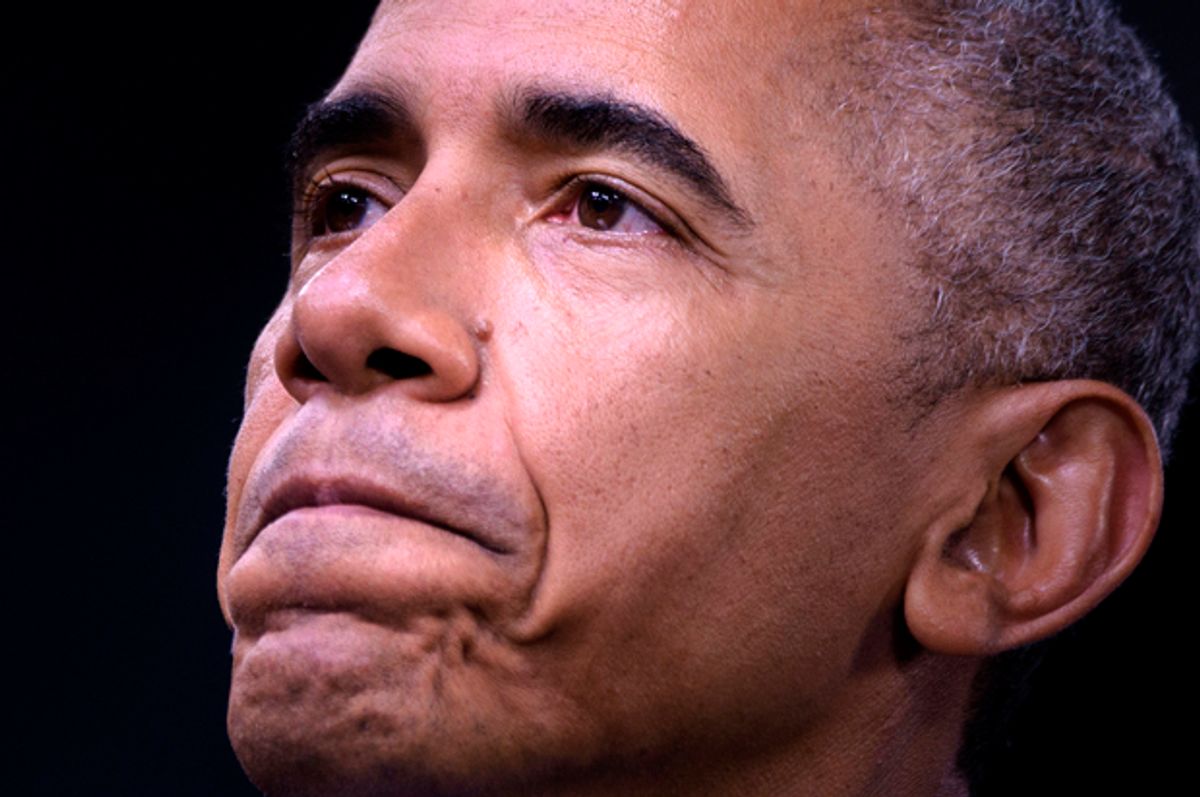 Amnesty International has accused the U.S. of "deadly hypocrisy" for its massive arms deals with Middle East governments that have carried out war crimes and other violations of international law.

"One of the unspoken legacies of the Obama administration is the extraordinary uptake in the amount of U.S. weapons and military aid that are provided to major U.S. allies like Saudi Arabia, Israel and Egypt that have terrible records when it comes to human rights," explained Sunjeev Bery in an interview with Salon.

Bery, the advocacy director for Middle East and North Africa issues at Amnesty International USA, called on the Obama administration to "do an about-face on its current policy of providing vast arms sales and military aid to repressive allies in the Middle East."

Israel has for decades been the largest recipient of U.S. military aid. It averages more than $3 billion a year, although this figure may soon increase. Egypt comes in second, with $1.5 billion. In 2014, these two countries received about three-fourths of U.S. foreign military aid.

In the past few years, however, one of the most repressive countries in the world has become a key customer for U.S. weapons: Saudi Arabia.

Since President Obama took office, the U.S. government has done a staggering $110 billion in arms sales with the Saudi monarchy — amounting to an unprecedented increase. Like Israel and Egypt, Saudi Arabia has long been a close U.S. ally, but the U.S.-Saudi military alliance has grown dramatically since 2009.

Throughout the past year U.S. weapons have kept flowing to Saudi Arabia, even while the United Nations and human rights groups have documented a slew of Saudi war crimes in Yemen.

Amnesty International and Human Rights Watch have condemned the U.S. and U.K. governments for providing weapons, military intelligence and support to the Saudi-led coalition that has since March 2015 launched thousands of air strikes in Yemen, warning that they may be complicit in war crimes.

The bombing campaign has ravaged Yemen, the poorest country in the Middle East. Nearly 4,000 civilians have been killed and thousands more have been injured, with an average of 13 civilian casualties a day, according to the U.N. The violence has displaced millions, incited mass hunger, fueled extremism and pushed more than 80 percent of the population into what the U.N. has for more than a year called a “humanitarian catastrophe.”

Bery told Salon, "The bottom line is that the U.S. government considers to arm the government of Saudi Arabia with precisely the kinds of weapons that Saudi Arabia and its coalition have used to attack civilian communities in Yemen. That's the fundamental problem," he added.

"Nobody should be putting more bombs or weapons in the hands of the Saudi Arabia-led coalition," he stressed.

On Aug. 25, U.N. High Commissioner for Human Rights Zeid Ra'ad al-Hussein called for "an international, independent body to carry out comprehensive investigations in Yemen." The U.N. Human Rights Council, at the high commissioner for human right's recommendation, had previously tried to create such an international probe, but it was derailed by the U.S. and Saudi Arabia's European allies.

Amnesty International and Human Rights Watch have since urged the U.N. General Assembly to suspend Saudi Arabia from the Human Rights Council, citing its "gross and systematic violations of human rights abroad and at home."

For several months these leading human rights groups, pointing to the mass atrocities, have called for an embargo on all weapons transfers to Saudi Arabia. The U.S. and other Western countries, however, have ignored them.

On Aug. 8, the U.S. State Department told Congress it had approved yet another arms deal: a $1.15 billion sale of tanks, machine guns and more. This reinvigorated a bipartisan campaign by lawmakers — including Chris Murphy and Rand Paul in the Senate and Ted Lieu and Ted Yoho in the House — to pass legislation barring U.S. arms sales to Saudi Arabia.

Salon has previously reported on Rep. Lieu's past legislative attempts to pass legislation and raise concerns within the government over U.S. support for the Saudi-led coalition.

"Instead of handing weapons over to governments like Saudi Arabia's, Israel's and Egypt's, the Obama administration should put human rights standards in place such that the chance that U.S. weapons would be used by U.S. allies to attack civilians would go down significantly. Right now it's the opposite," Bery said.

"Governments like Saudi Arabia, Israel and Egypt basically can count on a continuous flow of U.S. weapons and military aid, no matter what they do inside their countries or to populations next door," he added.

A recent Amnesty International report found that the U.S. is the world's top exporter of conventional arms. From 2010 to 2015, the U.S. transferred more than $55 billion of weapons throughout the globe.

More and more money is being spent on weapons in the Middle East. Military expenditure in the region grew from from $130 billion to $181 billion from 2008 to 2014, according to Amnesty International.

In 2015, Saudi Arabia spent a staggering 13.7 percent of its gross domestic product on weapons. The Saudi regime, a repressive theocratic absolute monarchy based on an extreme interpretation of Islam known as Wahhabism, has quickly become one of the world's largest arms importers.

The Saudi regime is not just buying weapons from the U.S. The French government authorized the export of as much as $18 billion in arms to Saudi Arabia in 2015 alone. The U.K., Germany and Spain also join the U.S. and France as the Saudi monarchy's top five arms suppliers.

The UAE, another of the largest importers of weapons, is a key Saudi ally in the Western-backed war in Yemen. Emirati troops were even deployed to fight Yemen's Houthi rebels and allied militias loyal to former President Ali Abdullah Saleh.

On Aug. 25, Secretary of State John Kerry visited Saudi Arabia , where he said the Gulf states had agreed to restart peace talks, which had broke down earlier in the month. Saudi Foreign Minister Adel al-Jubeir said they reached "a [road map] for Yemen."

Amnesty International USA's Sunjeev Bery remains skeptical. "There's an element of hypocrisy for Secretary of State Kerry to go to Saudi Arabia and talk about a commitment to peace, while simultaneously right now authorizing a billion-dollar tank sale to that same government," he said.

"Secretary Kerry and President Obama continue to authorize arms sales to Saudi Arabia that have a substantial risk of causing even more civilian casualties and human rights violations in this ongoing bloody conflict," Bery added.

The U.S. has given some indications that it's responding to mounting public criticism of its facilitation of the brutal bombing campaign. In mid-August, it disclosed that in June, it had quietly withdrawn some of its military personnel from Saudi Arabia, which had been coordinating the coalition bombing in Yemen.

Yet the Pentagon has remained adamant in its support. It stressed that the withdrawal had nothing to do with the enormous civilian casualties in Yemen and noted that it is still refueling coalition jets and sharing intelligence.

Bery emphasized that there has not been nearly enough public scrutiny of the U.S. military alliance with Saudi Arabia and other repressive regimes in the Middle East.

"This is definitely something that needs to be talked about a lot more in the United States, as the Obama administration moves into the lame-duck period and as people look carefully at what Obama's legacy is in the Middle East," he told Salon.

Added Bery: "It's astonishing just how vast the flood of weapons has been to Saudi Arabia and other human rights offenders in the Middle East."