"You're the Worst" returns at its best: Finding comedy in depression and the rocky road to wellness 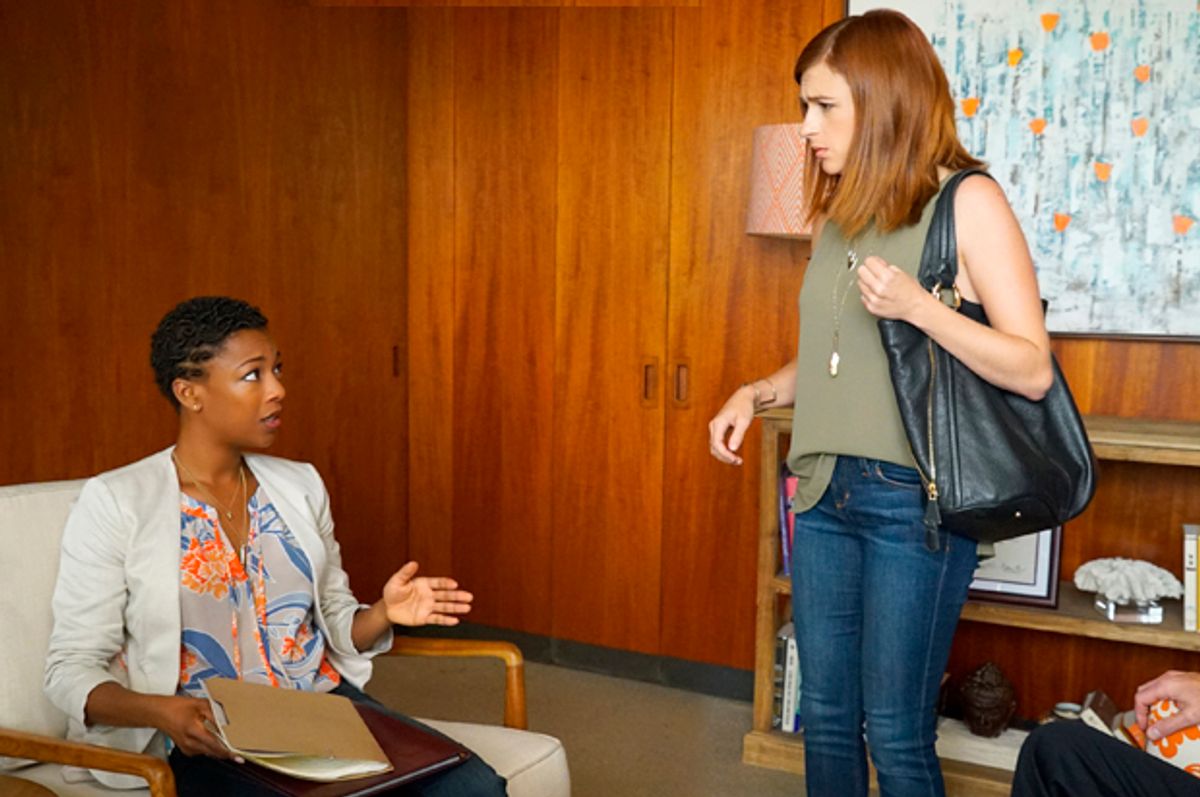 Terrible people are best avoided in real life, but on television they make for entertaining sitcoms. The “Seinfeld” crew?  Simply awful – but that Kramer is high-larious to watch, right? Hang with “New Girl’s” adorably twee roomies? No thank you.

FXX’s “You’re the Worst,” in comparison, makes no illusions about the fact that its characters are self-serving wrecks with a bottomless appetite for dysfunction. That somehow makes the idea of being with them in the flesh more bearable. Nothing makes us feel better than seeing others who have made more of a mess of their lives than we have.

The comedy’s central couple, Gretchen (Aya Cash) and Jimmy (Chris Geere), exudes a disdain for concepts as bourgeois as love and commitment. But Gretchen and Jimmy cling to each other for dear life.

Meanwhile, Jimmy’s pal and roommate Edgar (Desmin Borges) is a freeloader, but he’s also a really nice guy who pulls his weight by acting as Jimmy’s personal chef and butler. Gretchen’s best friend Lindsay (Kether Donohue) is all image and no substance and willing to compromise her happiness if it means living in a nice house with a man who does everything.

There’s comfort in celebrating one’s flaws, but the four characters in “You’re the Worst” revel in theirs. Gretchen, Jimmy and Lindsay would sail through life on a river of bourbon if they could, just as Edgar would prefer to treat his debilitating PTSD with a never-ending marathon of cooking shows and improvisational classes.

It probably goes without saying that they’re all deceiving themselves. But Season 2 of “You’re the Worst” began exploring the implications of their self-delusion by taking Gretchen on a descent through depression that felt abrasively honest. The comedy paid dearly for it; viewership dropped by nearly a third between the first and second season finales, even as many critics heralded the writing’s realism and sensitivity of Cash’s performance.

Depression isn’t an illness that simply goes away, and Season 3 continues to explore Gretchen and Jimmy’s relationship with the condition — and each other — as Gretchen enters therapy. That, too, takes this show into largely underexplored territory of an all-too-familiar TV realm.

For good or ill, many people have gleaned much of what they know about psychotherapy from watching TV series. Entire comedies have been built around psychologist characters. Frasier and Niles Crane are iconic examples of this, along with Robert Hartley of “The Bob Newhart Show,” with the central joke being that they should be on a couch themselves.

Rarer are series that take an honest look at the painstaking start-and-stop process of the full-scale pursuit of emotional wellness through characters who resemble the people in our own lives. Even then, they’ve been either too painful to watch, like HBO’s “In Treatment” or the short-lived and underappreciated “Tell Me You Love Me” — or tepid to the edge of pointlessness in the case of shows like NBC’s grief support comedy “Go On.”

What TV sitcoms haven’t often attempted to do is play with the comedy inherent to the struggle to attain psychological wellness. This probably has something to do with the widely held view of therapy as an indulgence and mental illness as a stigma or a sign of weakness.

Even those who have a more measured view of psychological conditions know that living with one presents a set of difficulties, some directly related to the diagnosis and others tied to how it's perceived by the people around them.

Some of most seemingly impossible obstacles largely exist inside a person's head. But other challenges are very real, including the more annoying side effects of taking medication, which can lead to an individual's making perfectly logical if dangerous compromises. If the options are for a person to choose between emotional stability with impotence and a healthy libido accompanied by mood swings, it's evident why someone would go off her meds.

Strangely enough, that’s where the comedy comes in.

Creator Stephen Falk finds the laughter in “You’re the Worst" in these spaces, as well as by giving each character brittle emotional shields to break against the world.  Think of the dialogue as the din that results from these people stampeding through life: Gretchen hides her massive fear of failure behind a thick wall of sarcasm and a moat filled with bile, just as Jimmy uses elaborate language dripping with condescension to mask a crippling inferiority complex rooted in the way his working-class family belittled his talent.

Their mutual contempt for everyone that isn’t them comes into full flower in the new season’s second episode, when they team up against Gretchen’s therapist, Justina Jordan ("Orange Is the New Black" alum Samira Wiley, in a recurring role). Justina has the temerity to give Gretchen a homework assignment, and her enraged response is ridiculously out of proportion with the request.

Gretchen’s reaction is rude and hysterical — and heartbreaking, since the therapist’s suggestion was to simply open a piece of mail. Scenes like this hint at how “You’re the Worst” might distinguish itself from other TV treatments, by balancing unrelenting idiocy with aching vulnerability.

In that tiny explosion and others like it, Cash demonstrates a stunning command of emotive dexterity by following up every caustic comment with a glimmer of sorrow that crinkles the corners of her eyes and her mouth. This becomes only more pronounced after the episode delivers another surprising gut punch, which may turn the show's lens on hard-drinking Jimmy. Geere and Cash's chemistry with Wiley also portends many memorable exchanges in upcoming weeks.

Season 3 also continues to follow Edgar’s struggle with post-traumatic stress disorder, over which he decides to gain a tighter grip to solidify his relationship with Dorothy (Collette Wolfe).

Borges shoulders an important role in this series, not only by movingly representing the shades and shadows of his condition but also in lending “You’re the Worst” a needed dose of friendliness and good nature. Edgar’s soulfulness cancels out the unabashed selfishness of Donahue’s Lindsay, whose jovial narcissism provides a large share of the comic relief but who, out of all of these characters, would be the least enjoyable to experience in real life.

On this show, however, people like Lindsay serve a vital purpose in exploring what it means to get a grip on behavior demons and meaningfully heal the damage they cause. Much of successful recovery has to do with having a reliable, supportive social network. That becomes a problem when one’s closest friends and family are flailing themselves, or lack the patience or emotional capacity to stick around for the rougher parts of the ride.

Serious as this all sounds – and “You’re the Worst” does handle these issues with the consideration they deserve – the miracle of this comedy is that it never loses its sense of humor, even when anyone who is watching can see the characters are headed to dark places. For instance, when Dorothy asks Gretchen to define the difference between a psychiatrist and a therapist, Gretchen blithely answers, “A psychiatrist is like, ‘Here, take these pills, ho.’ A therapist is all, ‘Oh, tell me your shit; I couldn’t make it as an actor!’” She proceeds to inform Jimmy that visiting the therapist will be as easy as showing up, having the woman wave her magic wand, “And, boom! Gretchen’s 100.”

We know that isn’t true. On some level she knows it’s not true, either. But the fearlessness of “You’re the Worst” in these subjects makes a viewer yearn ride out the highs and lows as Gretchen, Edgar, Jimmy and Lindsay navigate out the glorious mess that is their world.