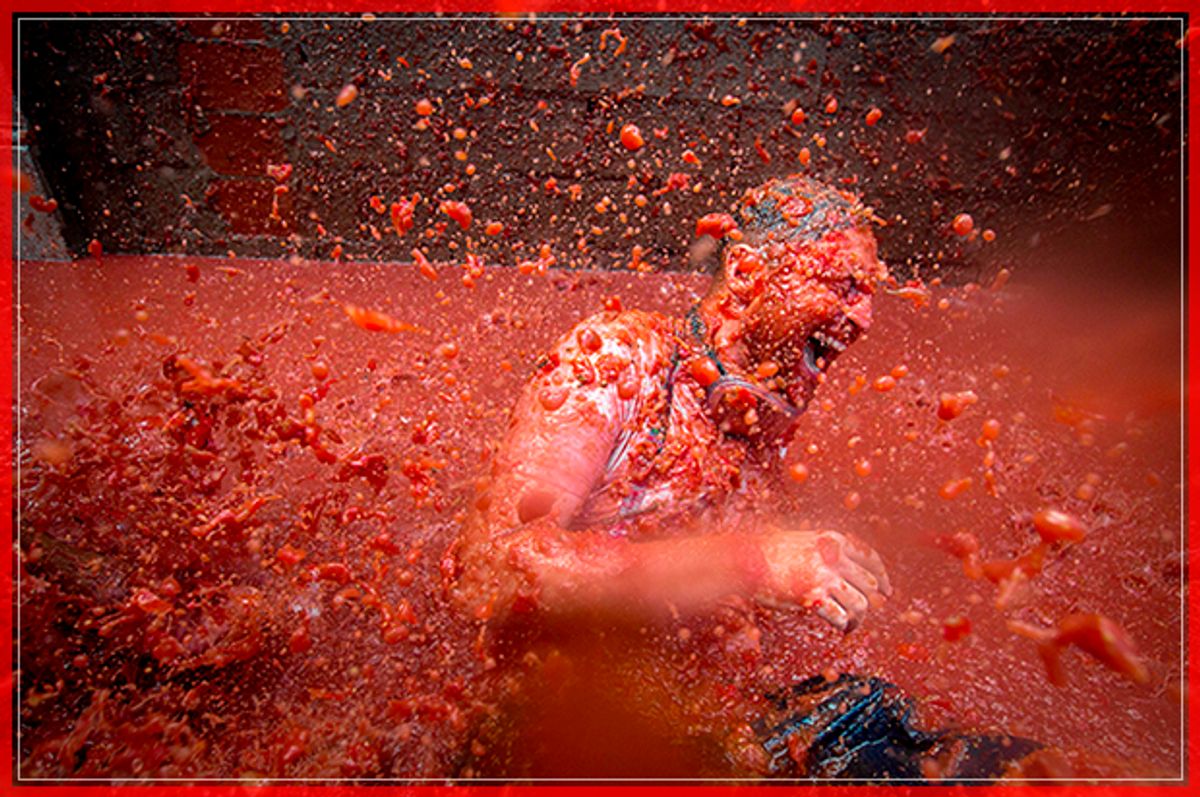 A reveller is pelted with tomato pulp during the annual "tomatina" festivities in the village of Bunol, near Valencia on August 31, 2016. Today at the annual Tomatina fiesta 160 tonnes of ripe tomatoes were offloaded from trucks into a crowd of 22,000 half-naked revellers who packed the streets of Bunol for an hour-long battle. / AFP / BIEL ALINO (Photo credit should read BIEL ALINO/AFP/Getty Images) (Afp/getty Images)
-- For decades, space exploration was driven by competition between the United States and the Soviet Union, and achievements quickly became bragging points for the respective superpowers. In a photograph once unimaginable, an astronaut and two Russian cosmonauts are pictured here at preflight training outside Moscow. The trio will head to the International Space Station next month. If I were a photographer, I would want to be at Burning Man every year. I would also want there to be a helicopter to airlift me out on a moment's notice. In case you were wondering what it is this man is holding, it's a small polaroid of himself. The key to mechanical bull riding is not brute strength, but achieving a Zen-like state that keeps you fluid, while the mechanical bull operator knocks you around praying you fall off soon so he can take his smoke break. Near the village of Buñol in Valencia, Spain, the streets ran red with rivers of…tomato juice. Thousands of people from all over the world congregated in Buñol to toss tomates at each other in celebration the annual festival known as La Tomatina, traditionally celebrated on the last Wednesday of August. Called the World's Biggest Food Fight, the main event only lasts for an hour, but, as you can see from this man’s full-body sofrito treatment, that's plenty of time to transform the place into a ruddy mess. More than 160 tons of ripe fruit gave their skins for the event’s enjoyment, but what you don’t see is how everything kicks off: someone climbs a greased wooden pole in the Town Square to retrieve a ham. Yes, you read that correctly.