Look for cockroaches, not unicorns — and other things you can learn from the "venture capital correction" 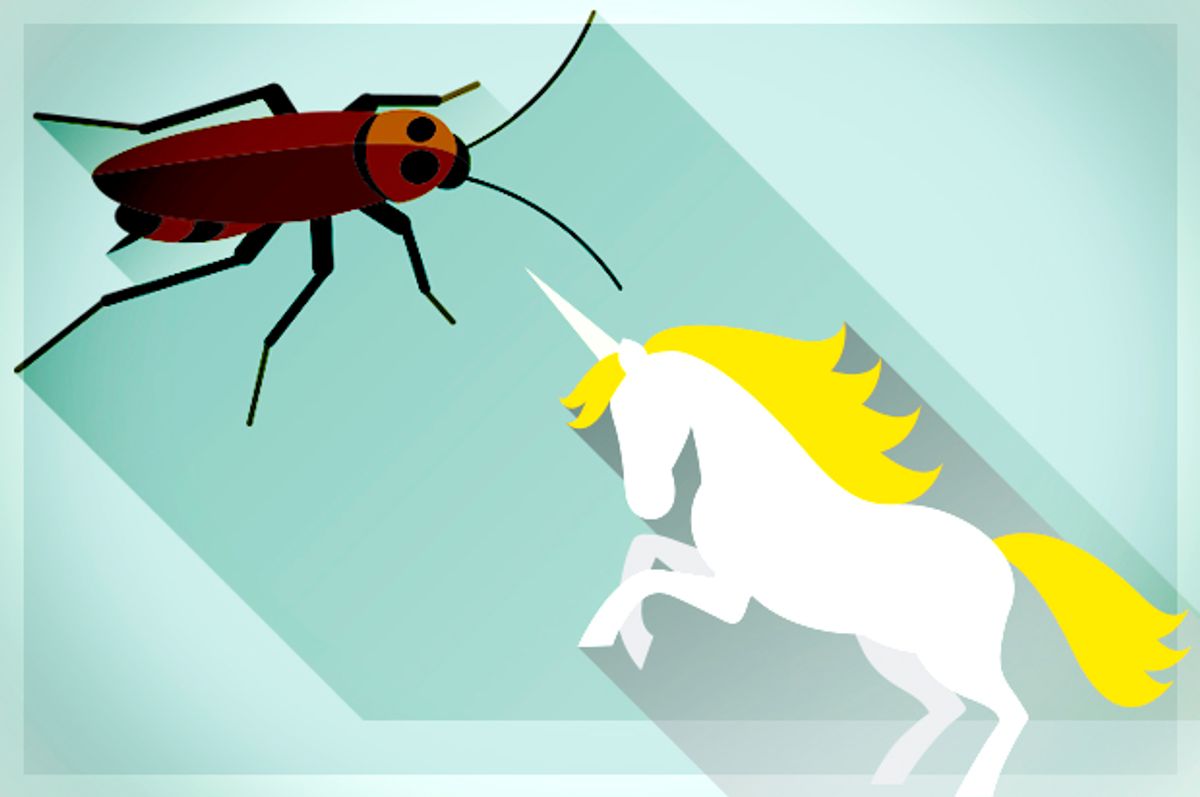 After U.S. investors poured a record amount into startup ventures last year, the high-stakes game of seeding businesses on promises of big payouts has fallen off slightly.  Why? Investors are fretting over stock market volatility, weak global economic conditions and growing concern a bubble may be forming in their beloved tech industry. Some market watchers, like Phil Davis, are even calling the downturn a "venture capital correction" after a series of weak initial public offerings last year put a damper on expectations.

“A lot venture capital firms make their money on IPOs,” Davis, founder of New York-based stock and options trading site PSW Investments, told Salon. “But now they have to look to companies for their actual value and overall there’s going to be market correction.”

Call it a sobering up. The past two years have been spent chasing the so-called unicorn startups (private companies with billion-dollar-plus valuations) in the tech industry. But the value of many of these unicorn companies turned out to be as mythical as their namesakes. Payment-processing firm Square (founded by Twitter CEO Jack Dorsey), content-managing company Box, wearable camera maker GoPro and fitness-tracking concern Fitbit are trading as much as 60 percent below their initial public offering prices, causing other companies to hold off on going public.

“With the upcoming U.S. presidential election, some choppiness in the public markets and ongoing concern regarding an increase in US interest rates, most North American VC investors have remained cautious, with some investors becoming more sensitive to possible valuations and pulling back from making major investments,” noted a report released last month by market intelligence firm CB Insights covering the state of venture capital investing for the first half of the year.

Here are five things to know about the current state of U.S. venture capital activity:

1. Venture capital funding is down.

Last year investors put a record $58.8 billion into private startups hoping for jackpots when those companies go public or get acquired; this is nearly double what investors risked in 2013, according to the National Venture Capital Association. But the cash flow is slowing. The amount invested in the first six months of this year has declined 10 percent from last year, to $27.9 billion. Estimates on venture capital funding vary, because some include angel investors and some don’t, but they all point to a drop in 2016 of as much as 25 percent, to a three-year-low.

CB Insights said venture capital funding to U.S. startups fell nearly 17 percent in the second quarter of the year, to $16.7 billion. The number of investment deals between venture capital firms and private companies in the quarter was 1,048, down from 1,408 and the lowest level since the end of 2014.

This represents a downturn only when compared to last year's an all-time high levels and still remains well above 2009, when the Great Recession knocked venture capital investments to just $20.4 billion.

“You don’t usually have $60 billion in VC money going in,” Davis said. “Last year everybody was throwing money at startups and into San Francisco homes and office space. Now they’re pulling back.”

2. But VC investors are getting smarter.

“VCs are trying to find places to put their money, and the safest places are in backing fewer startups with more robust metrics,” Black told Salon. “They still have a ton of money to play with, but nobody’s quite sure what’s going to happen. People are worried about macro factors, so they’re scrutinizing startup portfolios more than they were.”

Aside from a few big rounds of funding — for Uber and Snapchat — investors have been more willing to miss out on early investment deals and they’re taking more time to look at startup’s ability to withstand economic downturns.

3. They're diversifying their range of investments a little.

“Right now there’s more focus on pharma and biotech startups,” Black said. “Pharma giants are sitting on ludicrous cash piles and they’re willing to invest it in acquiring startups. It’s still a very risky field, but it has a lot of potential.”

4. Investors are starting to dabble in emerging markets again.

Investing in startups that focus on emerging markets is a riskier game, but after a big downturn last year some investors are looking for good returns abroad — and not just in China.

Many of these countries, such as Brazil, have been hit hard by the global downturn in commodities but some investors believe the worst is over and are see opportunity.

“A lot of money is going offshore as emerging markets bounce back,” said Davis. “Last year we saw a scare in China but now investors are looking to diversify again.”

One area of interest for investors, PitchBook’s Black said, is startups' piggybacking on Google’s and Facebook’s efforts to globally expand internet access to places that have had spotty service or none at all. For instance, there's a focus on companies that offer lower-cost online lending and money-transfer services aimed at lower-income rural communities. These are areas with greater risk and perhaps greater potential growth.

5. And most of all, venture capital investors are looking for startups can stay afloat without them.

Right now with the slowdown in IPO activity, investors are scrutinizing startups more carefully, shifting away from unicorns and toward cockroaches, the affectionate nickname for durable startups whose balance sheets can withstand apocalypse-like economic downturns.

“The tolerance for liquidity risk is the most important thing going forward right now,” Black said. Liquidity risk is a company's ability to pay its bills in the short term, usually measured by how much cash it has or can drum up within 30 days compared to its so-called short-term obligations, or the bills that come due over the next 12 months. “We’re coming to [the fourth quarter of] 2016, and there’s not a lot of time left this year for any significant IPO activity,” he added.

This focus means startup companies need to be able to withstand a potentially longer period before the big payday of an IPO or acquisition because investors are taking fewer chances and are biding their time to see how numerous factors play out. So the companies that show they are don't need VC investment are the ones that likeliest to get the investment. Go figure.