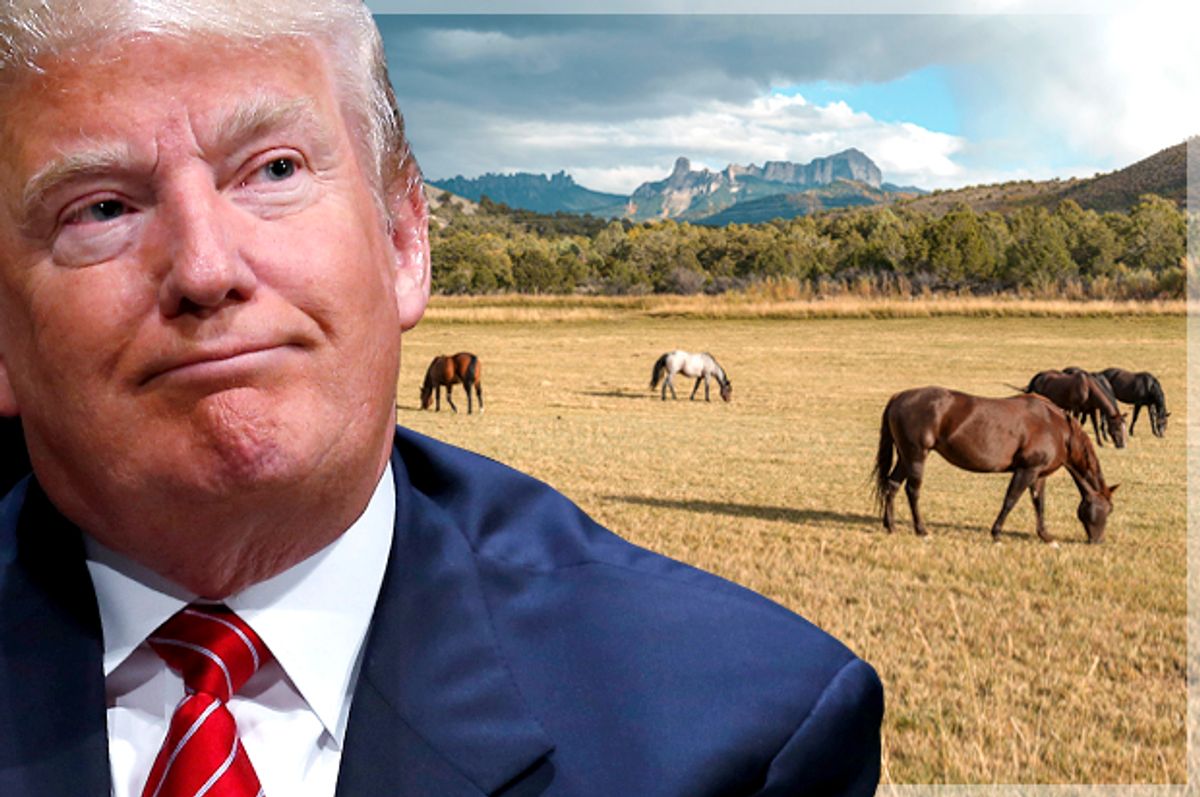 Donald Trump cleared some time in his busy tweeting schedule to attend a fundraiser on Tuesday in California's Tulare County. The luncheon, which cost $2,700 a plate to attend and $25,000 for a meet-and-greet with the candidate, was a huge hit, raising $1.25 million, a reported record for the area.

The pricy fundraiser is also a reminder that, contrary to conventional media wisdom, Trump enjoys quite a bit of support from the wealthy elite of the Republican party. And many of these elite attendees have political opinions that sound just like those of the Breitbart News-reading base.

One of the co-hosts of the Tulare fundraiser was John Harris, the head of the Harris Ranch collection of businesses, which is one of the biggest family-owned agricultural companies in the country. He also owns a horse farm, where the 2014 Kentucky Derby winner California Chrome was raised.

Harris was also a prominent villain in a landmark case regarding sexual violence in the workplace. In 2005, Harris Farms lost a court case against the EEOC, after Harris employee Olivia Tamayo accused her employer of not protecting her against a supervisor whom she said repeatedly raped and sexually harassed her. Harris minimized Tamayo's complaints and made nasty accusations about the motives of the EEOC in pursuing her case.

The facts of the case are simple: In 1999, Tamayo, a Mexican immigrant who had worked in the fields for Harris Farms since the 1980s, told her employer that her supervisor, Rene Rodriguez, had raped her three times and, on a separate occasion, punched her in the face.

"Instead of investigating and protecting Tamayo from further harm, company officials turned against her, according to EEOC attorneys," Lawyers Weekly reported in 2005. "She said the company assigned her to work in isolated areas, putting her in danger of additional assaults from the supervisor, who continued to berate and threaten her."

Tamayo quit in 2001, and the EEOC filed a suit on her behalf in 2002. Harris fought the EEOC tooth and nail over the charges, spending "hundreds of thousands of dollars to fight the lawsuit because it was convinced that the relationship between Ms. Tamayo and the supervisor had been consensual," according to the Wall Street Journal.

In 2005, a jury ordered Harris Farms to pay almost $1 million to Tamayo for its failure to protect her and for retaliating when she reported the abuse. (The award was later reduced to $800,000 because of federal limits on punitive damages in these cases.)

Harris himself was livid, describing the case as "extortion" and telling The Wall Street Journal, "They considered us a deep-pocketed employer." He appealed the case and lost again in 2008.

"Managerial agents criticized Tamayo for raising the issue of past harassment in a new complaint," the Ninth Circuit Court wrote in the decision to uphold the decision, and "indicated that complaints like hers cost Harris Farms time and money, suggested to Tamayo that continuing with her complaint would be difficult, and recommended to the Human Resources Department that Tamayo be suspended in the wake of a complaint."

Salon reached out to Harris, the Trump campaign and the Tulare County Republicans about this story, but received no response.

After the 2012 election, Republican officials put together an extensive "autopsy" report, interviewing more than 2,600 people about how to open the Republican Party up to more voters, especially women and people of color. One major concern was the public perception that Republicans were waging a "war on women," after multiple Republican candidates lost races after making tone-deaf remarks about sexual assault. Most notable among those was Todd Akin, a U.S. Senate candidate in Missouri, who claimed that women rarely get pregnant after "legitimate rape," the insinuation being that women who get abortions after rape are lying to conceal consensual sex. In 2013, Kellyanne Conway, who is now Trump's campaign manager, put together a presentation begging Republican men to cut it out with the insensitive rape remarks.

The rise of Trump has been widely interpreted in the political media as the conservative base rejecting these efforts to form a more welcoming Republican Party. In March, Politico ran a piece that pitted "members of the GOP establishment," who supposedly want a friendlier party, against primary voters, who love this racist and sexist red meat.

But the example of Harris suggests this dichotomy may be more a product of wishful thinking than based in the evidence. Harris, who held a fundraiser for Republican presidential hopeful Mitt Romney in 2012 that raised a million dollars, is a classic example of a wealthy donor-class Republican.

And yet Harris' behavior during the Tamayo case is tailored neatly to the political beliefs of the rabid Trump-loving Republican base: ugly and dismissive towards Mexican immigrants, quick to paint a rape accuser as a greedy liar, seeing rich, white men as the victims of politically correctness-crazed government officials.

These arguments have a lot of appeal not just in white working-class communities of America, but in the mansions and country clubs of the wealthy white men who run this country. Just because their Trump rallies are $2,700 a plate and held away from the cameras doesn't mean their politics are any more enlightened than those of the ordinary Joe voters wearing anti-Clinton T-shirts at a Trump rally.