After the Syrian-refugee milestone: The U.S. hits its modest resettlement goal, but the issue is still toxic

Now that 10,000 Syrian refugees have been resettled in the U.S., what next? Trump wants to send them back 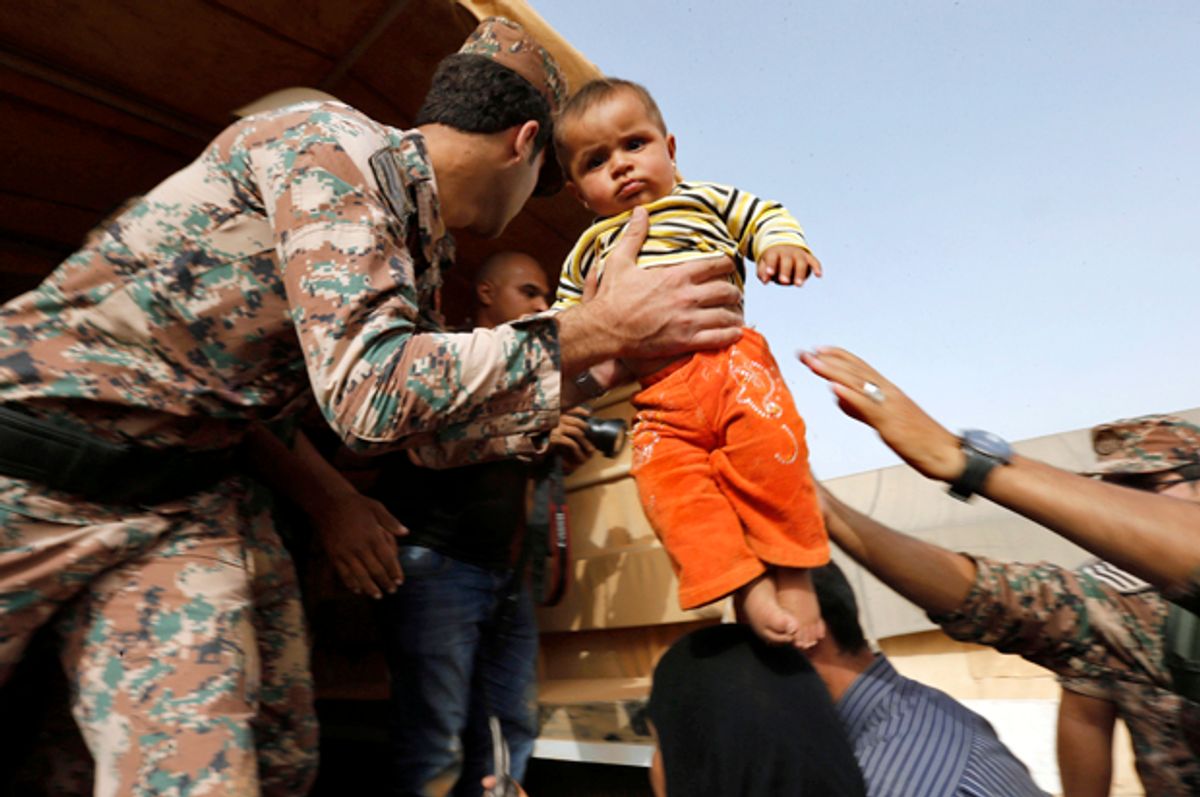 A Jordanian soldier carries a Syrian refugee child to help him board a Jordanian army vehicle with his family near Ruwaished, Jordan, September 10, 2015. (Reuters/Muhammad Hamed)
--

After an extremely slow start, the United States has officially reached President Obama’s goal of resettling 10,000 refugees displaced by the churning, unstoppable violence of the Syrian civil war. Not only did we reach that mark, we did it a month ahead of schedule. As NBC News reported earlier this week, Syrian refugee number 10,000 landed in the country on Monday and is already transitioning into a new life in the United States.

Before we get into the politics of all this, let’s be clear about how this achievement stacks up as part of the global effort to resettle refugees from the Syrian civil war. While it’s nice that we met our self-imposed goal, 10,000 refugees is a bare fraction of the total Syrian refugee population – there are some 4.5 million Syrian refugees currently living in Turkey, Lebanon, Jordan, Iraq and Egypt. European Union countries with much smaller populations than the U.S. have taken in far greater numbers of displaced Syrians: Germany alone took in roughly half a million in 2015.

So we’re making a contribution to the resettlement effort, but the expectation from humanitarian groups is that the U.S. will intensify its efforts. “We are happy that this milestone was reached, and also see it as an initial step,” said Stacie Blake of the United States Committee for Refugees and Immigrants. “This is the largest humanitarian and refugee crisis that we have faced in our lifetime, and we expect and anticipate that the U.S. will do more in the coming year.” That means, according to Blake, dramatically increasing the U.S. government’s commitment to resettling Syrian refugees and taking in at least 140,000 over the next year.

But as modest as the 10,000 refugee achievement is, it’s a good bet that Donald Trump will attack this number as unacceptably large during his big immigration speech on Wednesday. Trump has been extremely critical of the idea that a wealthy and developed nation such as ours would offer extremely limited assistance to one of the world’s most vulnerable populations, He has consistently depicted refugees – from the Middle East in particular – as self-evidently dangerous.

By Trump’s reckoning, every refugee is a potential Islamic State terrorist, so the only prudent course of action is to deny them entry altogether. He’s called refugees a “Trojan horse” for terrorism and promised to deport all the Syrian refugees who have been resettled in the U.S. over the past couple of years. He also attacks Hillary Clinton for wanting to bump up the number of Syrian refugees we take in. “She proposes this despite the fact that there’s no way to screen these refugees in order to find out who they are or where they come from,” Trump said during his speech at the Republican National Convention.

Trump, you won’t be surprised to learn, is wrong. We have a very strong understanding of who gets selected for resettlement in the U.S.: mainly families with young children and people with special medical needs. “The vast majority of the Syrians are coming in complete family units,” Anna Greene, the International Rescue Committee’s policy and advocacy director, told Salon. “You’re also seeing very large families, families with more than three children, for example, that simply are the most vulnerable.”

Demographic data provided by the U.S. Committee for Refugees and Immigrants backs this up. Nearly half (49 percent) of all the Syrian refugees who've arrived in the U.S. since October 2015 have been children aged 14 and under.

Syrian refugees who are selected for resettlement in the U.S. first must complete an intensive, multi-layered screening process that involves background checks and interviews by several international organizations before the U.S. government even begins its own investigation. In many cases, those selected to go through this process have spent several years as refugees registered with the United Nations. The background investigation itself can take as long as two years to complete after a refugee has been referred for resettlement.

Any would-be terrorist who hopes to infiltrate the U.S. posing as a refugee has no guarantee that they’d even meet the criteria for resettlement, and no guarantee that they’d end up here. Even to attempt that sort of infiltration would mean signing up for a many-years-long wait with a stringent background investigation awaiting them at its terminus. “It’s a very, very arduous process,” said Greene. “There is no more difficult way to get to the U.S. through a legal means than this program.”

So we do know who those 10,000 Syrian refugees are. And while Donald Trump and the GOP exploit these people as a means to whip up xenophobic hysteria, the real significance of the 10,000 Syrian refugees is that they represent the barest minimum of what we could and should be doing to help alleviate a massive humanitarian crisis.