Year of the Monkees: How the once-maligned "Pre-fab Four" came out on top — and cemented their legacy 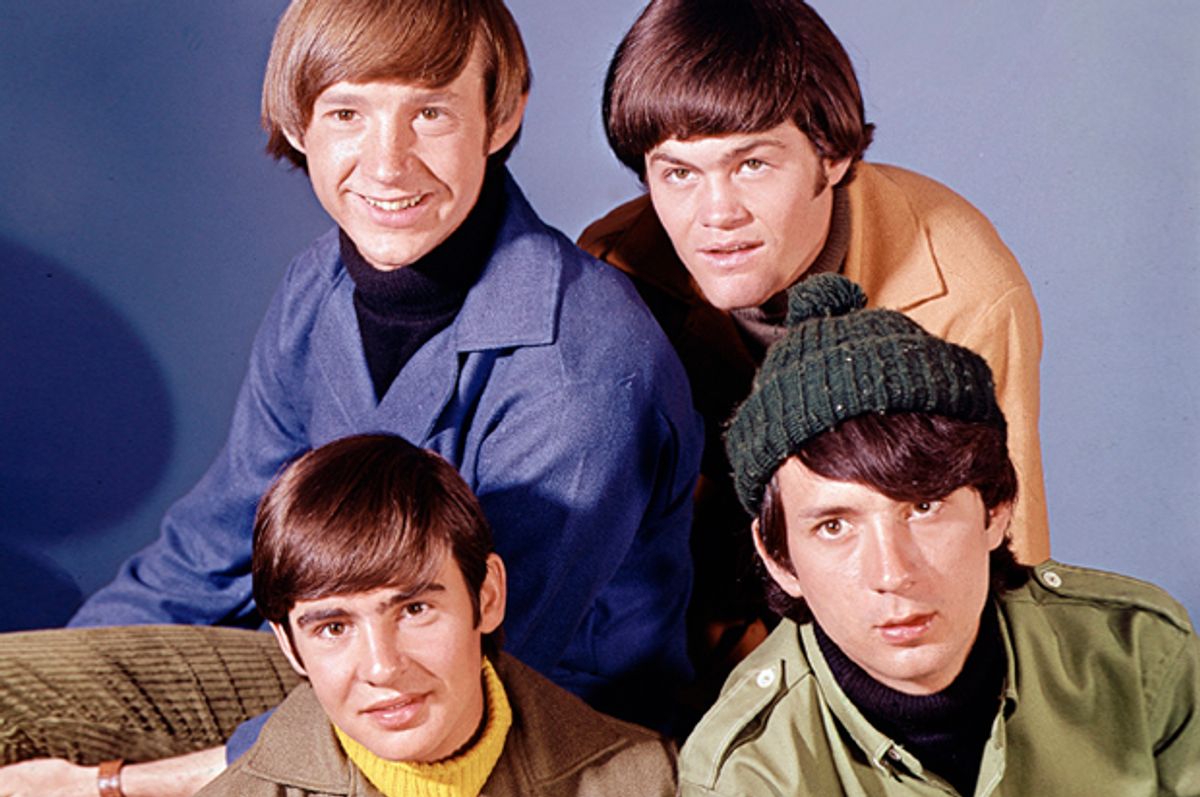 The classic rock universe has celebrated some rather huge 50th anniversaries this year.  A trio of legendary albums — The Beach Boys' "Pet Sounds," Bob Dylan's "Blonde on Blonde" and the Beatles' "Revolver" — all hit the half-century mark. With a bit less fanfare, the Monkees are also celebrating 50 years in 2016, as the group's titular TV show premiered on Sept. 12, 1966. In a nod to that momentous anniversary, Michael Nesmith — who has been hard at work on a memoir that's due next April and not on the road in recent years — announced he is doing one last show with the band in Los Angeles on Sept. 16.

"I am bringing Gretsch, my beautiful, intelligent blonde to help me, and it looks like I’ll make it once again," Nesmith wrote on Facebook. "I expect it will be fun, and a great way for me to sign out. I see the specter of the multiple Sinatra retirement/farewells — and this seems like the perfect time for me to step off, sit down and shut up."

Even before Nesmith announced the appearance, however, it felt like 2016 has been the Year of the Monkees. In May, the band, which includes Micky Dolenz and Peter Tork, released a stellar new album, "Good Times!," featuring songs written by Andy Partridge, Noel Gallagher and Paul Weller, Death Cab For Cutie's Ben Gibbard and Weezer's Rivers Cuomo. On Aug. 26, a three-CD greatest hits package, "Monkees 50," arrived in stores to provide an overview of the group's jangly garage-pop, power-pop and a smattering of more outré moments. A week before that, avowed fans the Minus 5 released "Of Monkees and Men," a lovingly crafted album featuring odes to the band, its history and universe: The ramshackle, rollicking "Micky's A Cool Drummer," for example, or the Stones-esque swoon "Boyce and Hart," a tribute to the Monkees' songwriting partners.

Die-hard fans — and there are many — won't at all be surprised by the Monkees' resurgence. Over the years, the TV show's ongoing syndication deal kept the band relevant and in the public eye, which helped it amass a healthy fan base. (Rolling Stone notes, for example, that "Good Times!" producer Adam Schlesinger watched the show on MTV in the mid-'80s.) The lingering, negative idea that the Monkees are some prefabricated creation that rose to popularity in the 1960s has also dissipated. "I think that has disappeared," Tork told Salon earlier this year. "The knives out, the prejudice, the disdain for the Monkees, that’s an old people’s trip, we’re not interested in that."

But the growing respect for the Monkees is also part of a larger trend toward ingrained musical biases falling away and fading, as newer generations take stock of what came before. Look no further than critics' punching bags Journey and Toto becoming cool or the way the Yacht Rock phenomenon has transformed overly earnest '70s and '80s soft rock into a beloved cult fascination. The Monkees' legacy is being shaped (or maybe it's better to say continually reshaped) by fans who never thought any backlash or scorn had merit and newer loyalists who may not be aware of (or care about) the band's baggage.

Without these expectations, what's left — as Tork alluded to in the Salon piece, when he said, "The Monkees' songbook is maybe the third-best songbook. You can’t beat Lennon/McCartney" — is the band's catalog. The new "Good Times!" sounds remarkably modern, with standouts including Partridge's effervescent, blue sky-pop gem "You Bring The Summer," Gibbard's elegiac, piano-driven "Me & Magdalena" and the Gallagher-Weller British Invasion homage "Birth Of An Accidental Hipster." It's a fantastic pop-rock record, no asterisk needed. But time has been kind to the group's early work — something attributable to the songwriting by notable contributors (Carole King and Gerry Goffin, Neil Diamond, Carole Bayer Sager) and the band members themselves, as well as the attention to detail.

It's a given that classics such as "Last Train to Clarksville," "I'm A Believer" and "(I'm Not Your) Steppin' Stone" endure. But 1967's "Headquarters," the first album on which the Monkees "called the musical shots," as Nesmith put it to Guitar World, shows off the group's lovely harmonies, gift for arrangements and song selection. And then there's the 1968 soundtrack "Head," which not only stands as a landmark release in the realm of psychedelic and late-'60s rock music but also has toyed with the Monkees' legacy and squeaky-clean reputation. (The "Head" movie itself is another, complicated story, as a 2011 Guardian interview revealed.) Perhaps because the band members initially were given no respect — and were figuring out how their disparate talents fit together once they had taken the reins — there was less pressure to conform to any one approach or sound.

And in hindsight, the TV show was ancillary to the music: Sure it was a way to promote LPs, but more of a parallel creative outlet that had its own unique, specific charms. Micky Dolenz agreed with one journalist's characterization that there was a "big pop art aspect" to the Monkees. "There was, totally. It was almost like installation art. Performance art!" He also added, "The Beatles got us. John Lennon said, 'It's like The Marx Brothers.' They got the whole dynamic, the whole sensibility. There were others. Frank Zappa, he was a huge fan. Lots of people in the business got it."

The Beatles' and Elvis Presley' appearances on "The Ed Sullivan Show" certainly changed the lives of thousands of people and inspired just as many to become musicians. The Monkees on TV reinforced for legions of kids that being a musician was an accessible goal and didn't necessarily require prior expertise.

But although the Monkees themselves could be goofy on TV, the band's music was never lightweight; it had heft, both in approach and themes. "He took it seriously," the Minus 5's Scott McCaughey said of Dolenz's participation in the Monkees. "He learned how to play the drums. He had never played drums before, and they made him the drummer in the group, and, sure, he didn't have to play immediately on the records, but he learned how to play drums. They toured live, and he played the drums. I love his drumming, maybe because he was sort of a novice. There's something really exciting to me about the way he plays."

Of course, the band members weren't necessarily musical neophytes: Before learning drums, Dolenz played guitar, while Davy Jones was an accomplished singer, and Nesmith had his own songwriting style. But well before the concept of punk rock existed, the Monkees rebelled against the idea that musicians needed to be experts to play music — and pushed back against those who didn't want to give them creative or musical control, as well as anyone who wanted to place limitations or project expectations onto the band. That iconoclastic spirit made the band even more endearing, especially once this history came to light.

Above all, there's always been something mystifying about why the Monkees worked — first, because four strangers thrown together had such incredible musical chemistry and then why and how the group has endured for 50 years, despite plenty of internal friction. Plenty of other bubblegum-pop acts of yore petered out, while modern made-for-TV musical acts have relatively short shelf lives. Look no further than Big Time Rush, for example, or the Hannah Montana franchise. That glue that's held the Monkees together through thick and thin is intangible and slippery to define; that ensures that the band is always intriguing.

"I'll call it a band," Nesmith told Rolling Stone in May. "But Micky, Peter and I talk about this all of the time because none of us really know. All three of us have our own ideas. This being, 'What is this thing? What have we got here? What's required of us? Is this a band? Is this a television show?' When you go back to the genesis of this thing, it is a television show because it has all those traditional beats."

Added Nesmith: "But something else was going on, and it struck a chord way out of proportion to the original swing of the hammer. You hit the gong and suddenly it's huge."