Got to give it up for Robin Thicke: Siding with "Blurred Lines" feels wrong, but it's the right thing to do 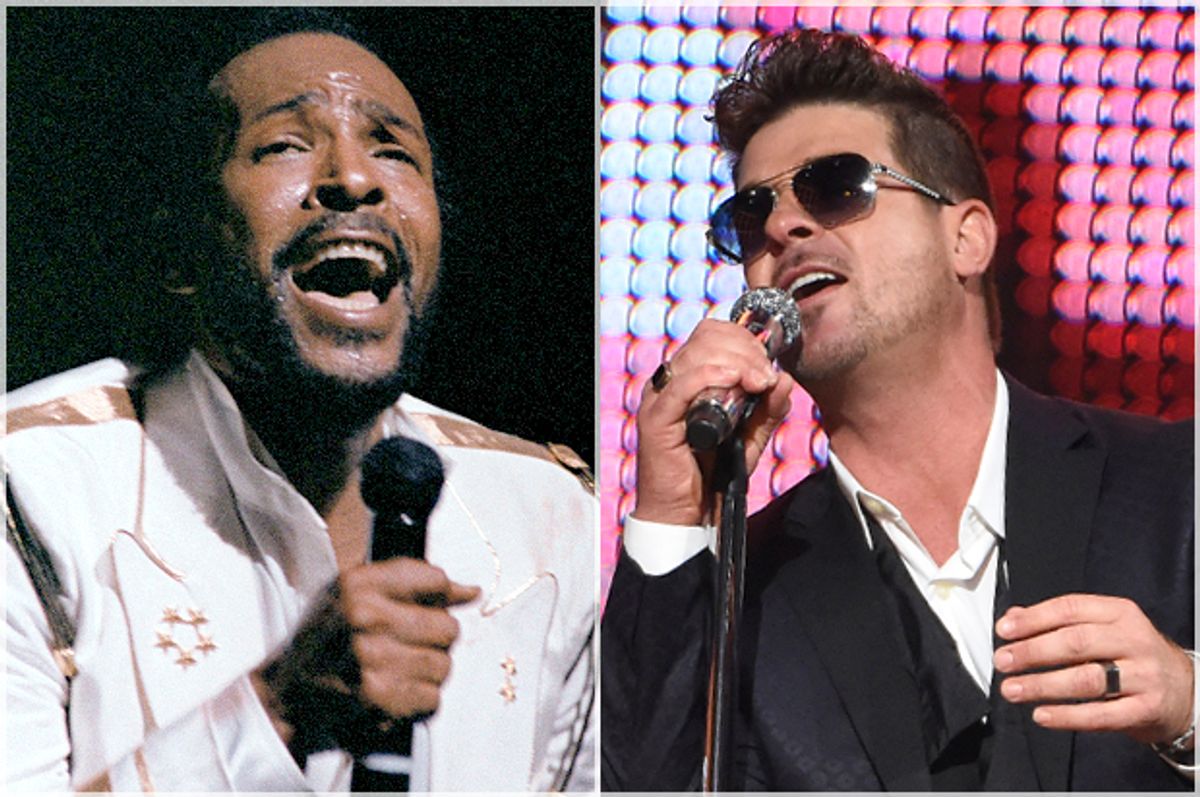 If you were polling artists and fans on their feeling about a certain opposing pair of musicians — Marvin Gaye on one hand, Robin Thicke on the other — the contest would not last long. Gaye was not only one of the most brilliant musicians in the history of R&B, he made both joyful music and, especially later on, songs that addressed issues from urban poverty to the degradation of the environment to his own divorce. Thicke, by contrast, is well-known as a weasel and musical mediocrity whose career has been derivative at best.

So if the fight over “Blurred Lines” — the 2013 hit single written by Thicke alongside Pharrell Willams, featuring T.I. — had been simply about the relative talents of the musicians and the good will toward them in musical circles, this would be simple. But instead what we’re seeing is the boiling over of long-brewing frustration with the plagiarism decision that awarded the Gaye estate $5.3 million, thanks to the argument that the song stole from Gaye’s “Got to Give It Up.”

Now, more than 200 musicians have filed a brief with a circuit court in Los Angeles decrying the original decision in favor of Gaye’s heirs: R. Kelly, members of the Go-Gos and Black Crowes, composer Hans Zimmer, producer Danger Mouse, Weezer’s Rivers Cuomo, and others are arguing that the decision will stifle musical creativity.

This is from the brief:

The verdict in this case threatens to punish songwriters for creating new music that is inspired by prior works. All music shares inspiration from prior musical works, especially within a particular musical genre. By eliminating any meaningful standard for drawing the line between permissible inspiration and unlawful copying, the judgment is certain to stifle creativity and impede the creative process.

While musical plagiarism standards exist, at least in theory, to protect musicians, this court decision has seen opposition from musicians from the beginning. Questlove from the Roots, for instance, told Vulture that he thinks “Blurred Lines” was not stolen: “It's not the same chord progression. It's a feeling. Because there's a cowbell in it and a Fender Rhodes as the main instrumentation — that still doesn't make it plagiarized. We all know it's derivative. That's how Pharrell works. Everything that Pharrell produces is derivative of another song — but it's a homage.”

It’s not the same chord sequence, not the same melody, and not the same key. Most plagiarism cases — including the recent lawsuit over Led Zeppelin’s “Stairway to Heaven” — have turned on these elements. Others have been provoked by stolen samples, especially when bits of James Brown songs were taken by rappers. De La Soul’s masterpiece “3 Feet High and Rising” was caught in an important suit with the band the Turtles; De La Soul lost.

But what’s disturbing about the “Blurred Lines” case is the way the feel and vibe of the song caused the legal trouble. The song’s lyrics and video may be sexist, and the racial subtext of the song — what Questlove called “Elvising” — is at least moderately troubling. But if the “Blurred Lines” decision isn’t reeled in, it could create a lasting precedent in which everyone — listener and musicians alike — loses.