The job crisis we must not ignore: Employment for young Americans remains staggeringly low 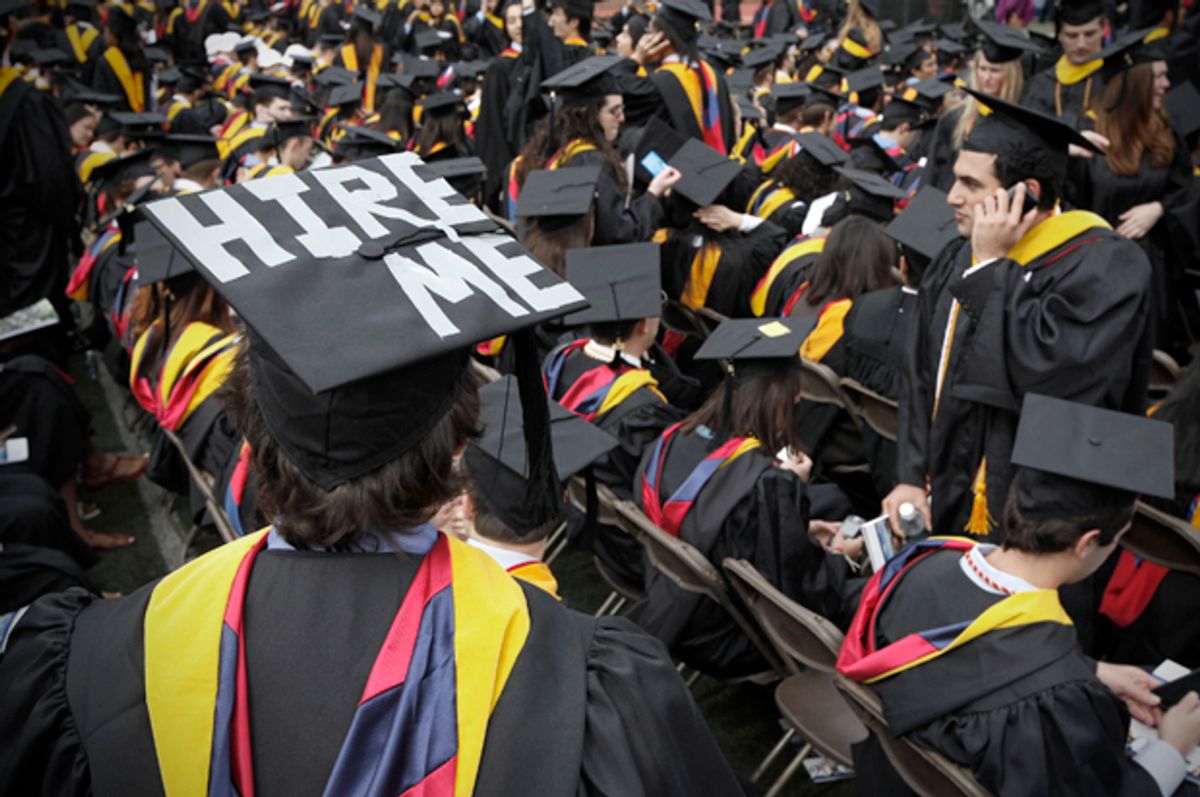 In the surreal kabuki theater that is  "Choice 2016" the entire focus by the corporate news media is on Donald Trump and former Secretary of State Hillary Clinton. It is all about the major party candidates latest gaffe, facial tick, or how much money they have, or haven’t raised.

Missed in this over priced electoral carnival is a crisis that has been brewing in plain sight for decades, a growing cohort of disconnected teens and young adults who are neither in school nor working. By some estimates there is  between 5.5 million to  6.7 million of these idle young souls whose inability to actualize will have profound lifelong implications for them and for the nation as a whole.

As older teens age into young adults, with no job and no direction, that failure to launch means failure to individuate from their parents, delaying marriage or even their own household formation. That lack of what psychologists call ‘agency over their lives’ hobbles them for life in terms of depressed lifetime earnings and the increasing likelihood they’ll end up incarcerated or bleeding out as a gun violence victim.

Dr. Harriet Fraad, a New York City mental health counselor who specializes in helping families cope with economic dislocation, said there’s an alienation that can set in the longer the young person is disconnected.

“They are told no one wants or needs you,” Fraad told Salon. “Their respites are to join others and fight for change, or become criminal to fight back, or get high and escape as rural youth can attest.”

Fraad thinks the emergence of this out of work-not in school young adult age cohort has prompted these  young people to question the legitimacy of capitalism.

“That is why now a majority prefer socialism to capitalism even though they are nor certain what either means,”  Fraad said. “They know we have capitalism and they are hurting.”

“Disconnected youth are white and black, Hispanic and Asian,” according to Opportunity Nation, a non-profit advocacy group’s website. “They are middle-class and poor, native born and immigrants. They live in rural, suburban and urban areas. Some struggled in school and lacked adequate supports to make it to graduation day. They include in their number the estimated one million students who drop out of high school each year, and fall through the cracks."

Just last week, an insightful analysis by the Chicago Tribune reported that in Chicago there were 45,000 20 to 24 year olds not in school and not working. When they looked at data for the greater Chicago metro region they found that there were 150,000 idle 16 to 24 year olds.

The Chicago Tribune observed that from January to July of this year 55 percent of the shooting victims and 59 percent of the arrests related to shootings in Chicago were of young people in the  15-to-24 age cohort.

"The two trends are tragically intertwined, where youth unemployment contributes to the incidence of violence, and violence in our communities contributes to many barriers to employment, both because of the violence itself and because of the criminal justice system's response to that violence," Matt Bruce, executive director of the Chicagoland Workforce Funder Alliance told the Chicago Tribune.

The trend was first flagged by the Bureau of Labor Statistics as starting to manifest in the early 2000s and has only accelerated over time. With post Great Recession structural shifts, like the spike in returning senior citizens back into the workforce, the bar is even higher today for kids to get that first job. The longer they go without that first employment experience the more depressed their lifetime earnings.

A BLS analysis noted that some of the summer youth employment drop off  was the result of more kids opting for summer school or some other form of academic enrichment over working but also concluded that for kids looking for work jobs were harder to come by.

“There is evidence as well that the types of jobs that teens would normally fill have become scarcer: not only is there increased competition for such jobs from other groups, but also, fewer summer jobs are funded through government programs,” wrote Teresa Morisi, a BLS economist in a 2010 white paper. “Finally, the decade has experienced two recessions, which no doubt have diminished employment opportunities for teens as well as other age groups.

The research is clear that it is that first summer job that often acts as the catalyst for a career.  While higher education, no doubt has its value, life is not always about just improving yourself, but bringing value to the broader community in the humility of service  to others that we find in work.

In his last State of the Union Address, President Obama raised the issue of “disconnected youth” and he asked Congress for $5.5 billion to help fund programs to increase employment and career opportunities for this cohort in an era where globalization and automation were making jobs increasingly harder to come by. Since 2010, when that Bureau of Labor research first surfaced about the deteriorating youth employment picture, Congress’s response has been to cut this programs by hundreds of millions of dollars in the years since.

But it's not just about Republican of Democrats. In New York City, Mayor Bill de Blasio, a self-proclaimed progressive, celebrated his “historic” boost of summer youth employment slots to 60,000. Yet, sadly close to 140,000 kids applied to the lottery-based program, meaning close to 80,000 kids were sent away empty handed. Since when was 43 percent a passing grade and what does the use of a lottery affirm?

What we have here is not a failure of just the Democrats or the Republicans, but of those of us who are middle-aged and older, who control stuff,  to make the fate of every one of our nation’s kids something we care about and that informs our voting. If we saw one of our own kids just hanging out for years,  aging into young adulthood idle, you can bet we’d take action.

It would be very much about the urgency of now.