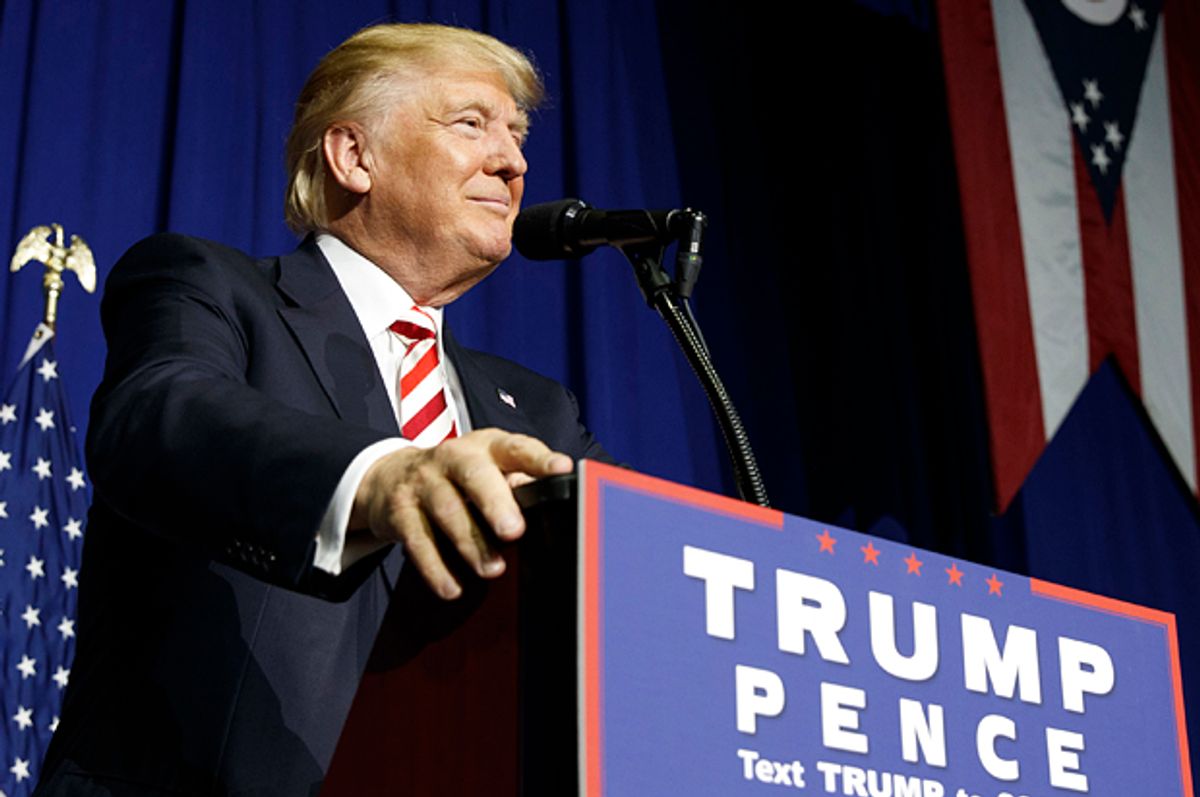 As I wrote this morning, Donald Trump's big immigration speech on Wednesday night was a demagogic horror show. But folded into the nativist barking and anti-immigrant fearmongering was something resembling a policy proposal: a 10-point outline describing how, exactly, a President Trump would tackle the issue of undocumented immigration. Despite Trump’s promises of detail, very little of what he proposed delved into specifics. But the thrust of his policy was clear: mass deportation.

He touted a “zero tolerance” policy for "criminal aliens" and promised that on Day 1 of his administration he will begin rounding up for deportation the supposed 2 million of them that he said are currently living in the country. The noncriminal element of the immigrant population would also be prioritized for removal under the Trump plan.

“Anyone who has entered the United States illegally is subject to deportation,” Trump declared, explaining that the focus of his removal policy will be “criminals, gang members, security threats, visa overstays [and] public charges.” The “public charges” are immigrants who, as Trump put it, are “relying on public welfare or straining the safety net.”

All this deportation would be conducted by an expanded roster of Immigration and Customs Enforcement agents and “a new special deportation task force focused on identifying and quickly removing the most dangerous criminal illegal immigrants in America.”

So what do immigration policy experts think of all this? Not much.

“The idea of zero tolerance on immigration violations, including visa overstays, would have devastating effects on immigration policy,” said the American Immigration Lawyers Association's executive director, Ben Johnson. “There’s many decent, law-abiding folks who for understandable and excusable reasons miss a flight and overstay a visa or make a mistake about the expiration of the visa.” The policy framework that Trump proposed, he said, is “not workable and it would be utterly destructive to our economy and to communities across the country.”

Of particular interest to me was Trump’s promise to prioritize deportations for undocumented immigrants who are supposedly “straining” the social safety net. Generally speaking, undocumented immigrants are not eligible for public benefits because they’re not citizens or legal residents. It’s often the case that their U.S.-born children, who are citizens by law, do, however, receive public assistance for which they are eligible — Supplemental Nutrition Assistance Program benefits,Temporary Assistance for Needy Families, Medicaid, etc.

Trump made clear that those mixed-status households are the ones he intends to target, pointing to a (deeply flawed) Center for Immigration Studies report claiming that “62 percent of households headed by illegal immigrants use some form of cash or non-cash welfare programs.” Citing the “tremendous costs” to the country, Trump said, “Those who abuse our welfare system will be priorities for immediate removal.”

This is all badly misleading. By focusing on “households,” Trump is deliberately obscuring the fact that some people within those households are legally eligible to receive benefits. And even though undocumented immigrants can’t receive benefits, a large portion of them pay taxes that help fund those programs. The U.S. Chamber of Commerce estimated that “more than half” of undocumented workers have federal, state and payroll taxes deducted from their paychecks.

More important, prioritizing these immigrants for deportation will have disruptive impacts that will ripple out into their communities. As Urban Institute research associate Julia Gelatt explained, what typically happens in such circumstances is that the undocumented immigrant father gets deported, which has a “traumatic impact” on the children who remain in the country.

“They’re losing their father, of course, and also, generally, families are losing the main breadwinner in the family, leaving behind economic strain,” Gelatt told Salon. “This is affecting U.S. citizen kids who are part of our communities, who are attending U.S. schools, who are part of the country’s future.” A Sept. 2015 Urban Institute report found that “an estimated half a million children experienced the apprehension, detention, and deportation of at least one parent in 2011 through 2013” and the short-term effects of those deportations can be potentially severe: economic hardship, psychological damage and declining physical health.

One of the chief mitigating factors in this scenario, the report noted, is the prosecutorial discretion of Immigration and Customs Enforcement, which can release detainees from custody as they await deportation proceedings. It seems pretty clear, though, that under the Trump plan, that discretion would be curtailed and many more kids who are U.S. citizens would be thrown into even worse economic hardship out of deference to “zero tolerance.”