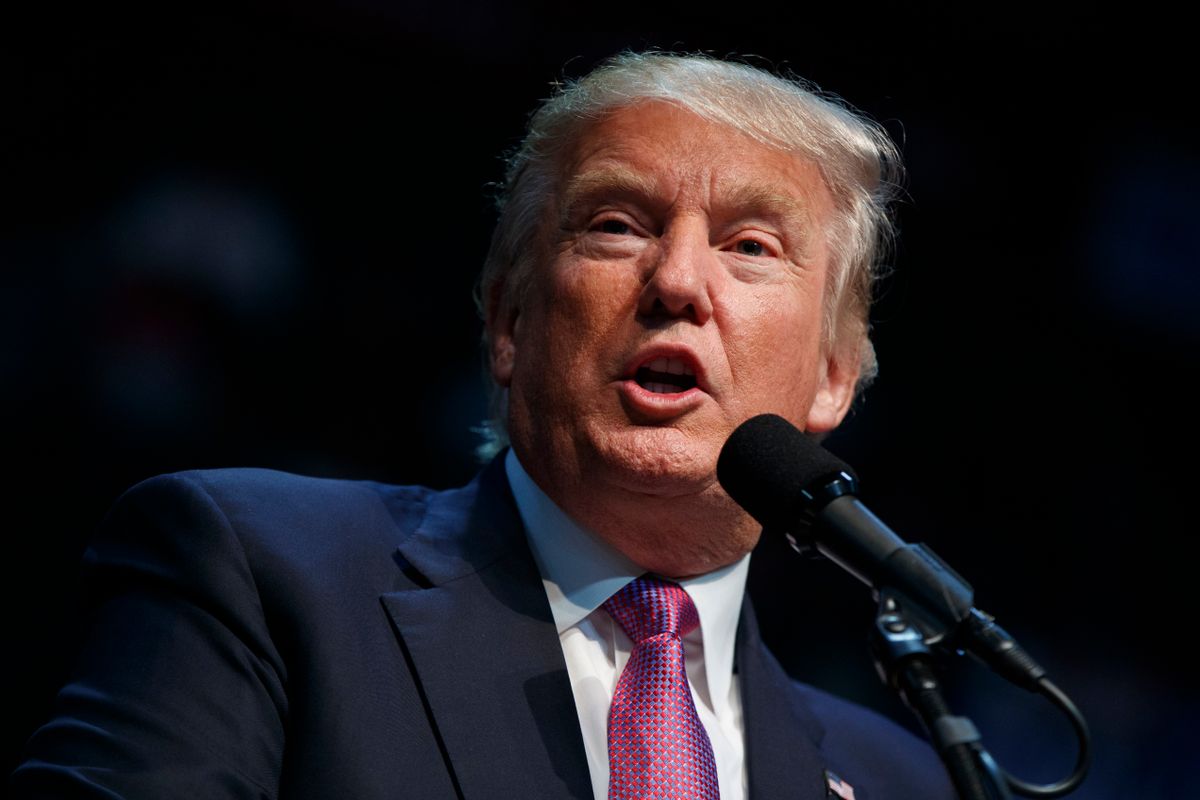 Donald Trump’s pledge this week to speedily deport “anyone who has entered the United States illegally” would require the creation of a vast police state that harkens back to the early 20th century, with Nazi Germany’s roundups and deportations of millions of Jews and others deemed undesirable.

“Under my administration, anyone who illegally crosses the border will be detained until they are removed out of our country and back to the country from which they came,” Trump blared. “And you can call it deported if you want. The press doesn't like that term. You can call it whatever the hell you want. They're gone.”

Trump’s plan starts with the immediate roundup and expulsion of “illegal immigrants who are arrested for any crime whatsoever,” but goes far beyond the notion that local police might stop a car whose rear headlight is out, demand visas and green cards, and in their absence throw that person into an American gulag that ends in a foreign airport. Trump has said that “62 percent of households headed by illegal immigrants” receive some welfare or food stamps, a “tremendous cost to our country” and “will be priorities for immediate removal.” That would create not just a climate of great fear, but in tandem with his pledge to push for a new national law withholding federal funds from sanctuary cities, it echoes 1930s Germany's deliberate stripping of civil rights.

Until Trump’s Arizona speech Wednesday, he had signaled that he still wanted to deport 11 million undocumented migrants — and also ensnare their estimated 5 million children born here and revoke their citizenship — but offered no details beyond saying he would find a “humane and efficient” way to do it. On Wednesday, he offered some numbers to indicate the size of the expanded federal police force needed, saying he would “triple the number of ICE deportation officers” and “hire 5,000 more Border Patrol agents.”

But a series of 2016 reports from a right-wing think tank, American Action Forum, which looked at the logistics behind Trump’s pledge to deport migrants in a two-year period reveals a far larger state police force and deportation machinery would be required. The closest historic analogy is not the arrest and deportation of 1.3 million Mexicans in the 1950s derisively known as “Operation Wetback,” nor the roundup and internment of 110,000 Japanese-Americans in WWII, nor the arrest of thousands of accused Communists in the Palmer Raids after WWI. It is Nazi Germany, where the Gestapo, or the state police — along with the legal system and the courts, a transportation infrastructure, and transit and concentration camps — were used to arrest and deport millions of Jews and other "undesirables."

“We examined what it would take to execute Donald Trump’s promise to remove all undocumented immigrants in just two years,” American Action Forum reported. “We detailed current immigration enforcement operations and estimated exactly how large each component of the enforcement process would have to be in order to accomplish this task.”

In other words, Trump’s Arizona speech was not just the usual ranting and raving Americans have come to expect from a man whose words cannot be trusted — such as playing nice while standing at the podium with Mexico’s president, and hours later vilifying migrants in his speech promising a new federal police state and gulag. His purportedly substantive speech detailing how he would do it was devoid of the real size and scope of the state police and deportation industry needed.

As for Trump’s illogical and cynical claims that deporting millions of migrants would lift the American economy and help underemployed Americans, the American Action Forum report found deporting 11 million undocumented people — including upwards of 6.8 million workers — would have devastating economic consequences. It would remove 16 percent of the nation’s farm, forestry and fishing workers, 12 percent of construction workers, 9 percent of leisure and hospitality workers, 6 percent of manufacturing workers and so on, cutting national economic growth from between 3 and 5 percent, or upwards of $625 billion.

American Action Forum projects that nearly 135,000 more immigration police and prison guards would be needed to arrest, process and deport 11 million undocumented migrants, as well as several thousands of additional judges, lawyers and workers in the courts and transit systems. They do not include Trump’s new pledge to police state welfare and public assistance agencies, which would increase the police state’s size. Nonetheless, the projection that 135,000-plus deportation police would be needed is on par with Nazi Germany’s police, imprisonment and deportation treadmill.

Here’s how enclycopedia.com summarizes the Gestapo network in WWII:

“At the outbreak of the Second World War in 1939, there were approximately 40,000 Gestapo agents in Germany. As the war progressed and the Nazis gained territory throughout Europe, the Gestapo swelled to employ over 150,000 informants, agents and accessory personnel. Gestapo agents were charged with rooting out foreign agents and resistance fighters, but they also expanded their role as an internal police force."

The comparisons continue. American Action Forum anticipates the need for more than 300,000 additional “immigration detention beds.” If you look at the population of Nazi Germany’s biggest transit and concentration camps, you find a matrix of prisons where tens of thousands were held simultaneously in an array of facilities for forced prison labor or before being deported over many months.

Trump’s police state would turn modern America into something that hasn’t been seen in the West for 75 years. And his proposal that new migrants sign loyalty oaths is akin to what the United States required European immigrants to swear as they landed on U.S. shores before WWI.

Considering that the largest number of annual deportations under President Obama has been about 410,000 — causing tremendous grief as families have been broken up — any scenario for exponentially increasing that figure portends great civil strife, economic disruption and the imposition of a police state.

“I can’t even begin to picture how we would deport 11 million people in a few years where we don’t have a police state, where the police can’t break down your door at will and take you away without a warrant,” Michael Chertoff, secretary of Homeland Security under President George W. Bush, told The New York Times in May when asked about implementing Trump’s proposal.

It’s easy to dismiss Trump’s deportation pledge as the ravings of a politician who will say anything to rev up his base through grievance and revenge politics. But it's another to thing to contemplate what it would mean to enact. The historic analogies, where they can be found, are appalling and could transform the country into an unrecognizable police state.