Trump’s liar-in-chief: Since joining his staff, Kellyanne Conway has been living in a world of make believe 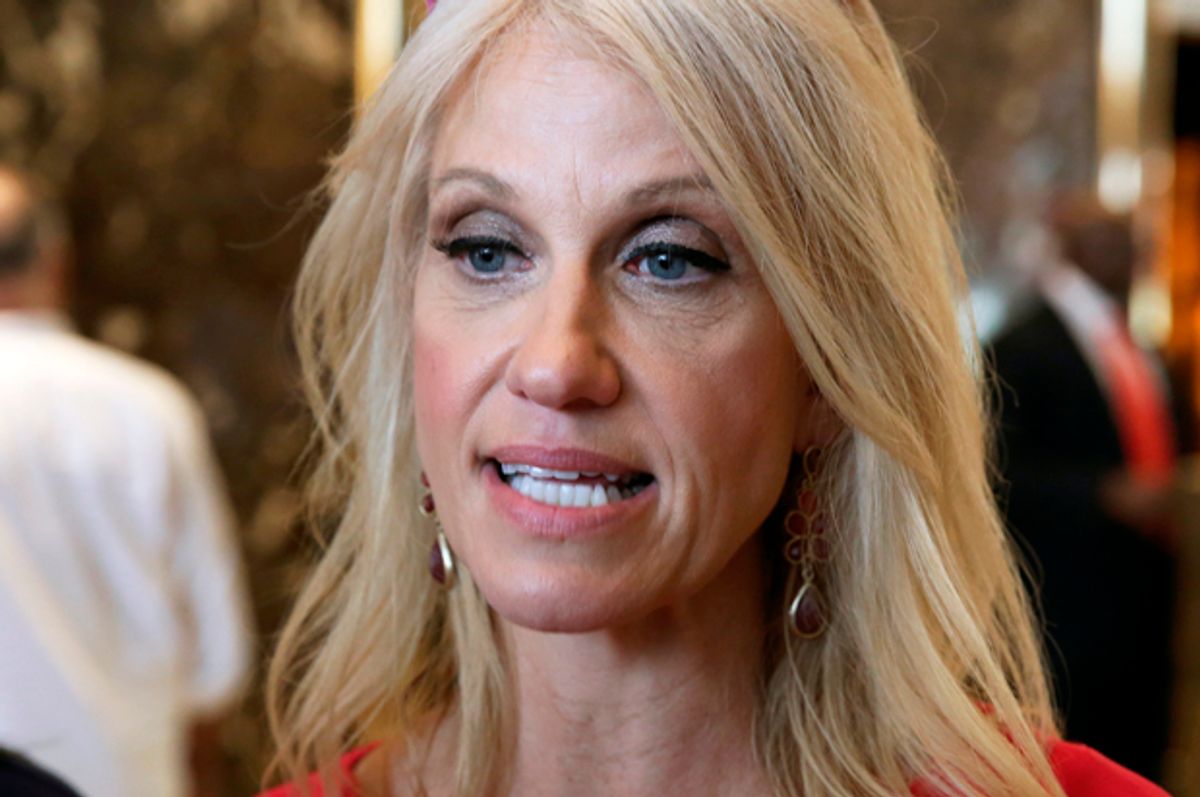 Facebook
Twitter
Reddit
Email
view in app
When Kellyanne Conway became the new campaign manager two weeks ago for Donald Trump, she established her hallmark right out of the gate: lying.
It began with very circumstances of her hiring. Everyone knew that her appointment meant that Trump’s existing campaign chairman, Paul Manafort, was out. This sort of reshuffling generates bad publicity for a campaign because such a major shake-up only two months before an election indicates turmoil within the organization.
Conway’s solution to the problem was simple: to just lie. This is really not a shake-up, she insisted. Instead, she characterized it as an “expansion.” She claimed that Manafort would remain in his job and she would merely join Manafort along with Stephen Bannon, the new campaign CEO who was also brought in at the same time as Conway. She painted a lovely picture that the three of them would work together in perfect harmony to run the campaign all the way through until the election. Two days later, Manafort was gone. Some might say that Conway deserves some leeway because such a major shake-up is a sensitive event and any new campaign manager would certainly finesse the issue to minimize the damage. Fair enough.But this was no mere finessing. This was a carefully planned lie. Presenting to the media the new false management structure of the three-person team created the impression that a disorderly shake-up was not underway. But, of course, this turned out to be a deception.Furthermore, when Democratic presidential nominee Hillary Clinton suggested that it was a shake-up, Conway viciously attacked her for being a liar. “That was a complete lie,” Conway charged, insisting, “Nobody got fired at the Trump campaign today.” The audacity is stunning. Not only was Conway lying herself but when someone else spoke the truth, Conway attacked that person, calling her a liar.This is how Conway began her new job as Trump’s campaign manager. And it didn’t stop there. The bald-faced lies have only continued.Some of them are so obviously false that they are laughable like Conway's assertion that Trump does not insult people. “He doesn’t hurl personal insults,” she claimed.

This, of course, is absurd. Trump is the king of hurling personal insults. Even Megyn Kelly on her Fox News program scolded Conway for this doozy. “Now, you know that’s not true,” Kelly said.

When pushed on this, Conway has shamelessly tried to seek a moral high ground. “I don’t like when people hurl personal insults,” she said. “I’m the mother of four small children. That would be a terrible example for me to feel otherwise.” But yet there she is, stumping as the campaign manager for someone who should never become a role model for children.

After Trump flip-flopped on his immigration position by saying he could “soften” by not immediately deporting all of the 11 million undocumented immigrants who are already in America, Conway took to the airwaves to insist that Trump had not changed his position at all. This was stunning because, of course, shifting from a proposal to deport them to a plan to not deport them sure seems like a change. “I assure you,” Conway said. “Nothing has changed.” Once again, her statements simply bear no resemblance to reality.

Sometimes Conway’s statements are the exact opposite of reality. For example, Conway maintains that Trump desires to focus on substance and policy, whereas Clinton just wishes to pursue attacks and insults.

The world is upside down. Conway has it precisely backward. It is Trump who lacks substance and policies. He even said himself that voters don’t care about policies, and he mocked Clinton for producing policies. Trump’s campaign is hardly based upon substance and policies; rather it is based upon instilling fear without any regard for the truth. A recent fact-checking report determined that Trump’s claims are false or mostly false a whopping 78 percent of the time. Conway reinforces this cult of egregious lying.

Clinton, on the other hand, is a decided policy wonk who has offered a healthy abundance of facts and policy proposals during the course of her campaign.

It is obvious to see that Trump’s forte is casting insults whereas Clinton’s forte is substance and policy.

Conway’s utter lack of regard for honesty is simply breathtaking. She seems to feel completely free to say anything whatsoever, regardless of whether it has any basis in truth. She appears to have absolutely no concern that lying is morally wrong. It’s like she is missing the morality gene. She will say whatever portrays Trump in the most favorable light at a particular moment, regardless of whether it is accurate.

In fact, the overall message about Trump that Conway presented to the public when she took over as  campaign manager seems to have been based upon deceit as well. She announced that her new strategy would be to let Trump be Trump. This was clearly designed to reassure Trump’s core supporters that they could count on the candidate remaining true to the principles that had attracted them in the first place.

But in practice, Conway has done the exact opposite. If Trump were being his true self, he would be giving unscripted speeches off the top of his head and insulting all sorts of people. But Conway now has Trump chained to a teleprompter. This is hardly letting Trump be Trump. His “softening” on immigration is not Trump being Trump but clearly is aimed at attempting to attract Latino voters. And scaling back Trump’s insults is certainly not letting Trump be Trump.

Instead, Conway is attempting to change Trump’s behavior and positions in order to attract more voters, while simultaneously reassuring his base of supporters that Trump is not changing at all. She is speaking out of two sides of her mouth, and these two opposing positions cannot both be true.

Considering that she's been on the job only two weeks, that sure is a whole lot of lying.

Clearly, Conway has no regard for the principle of conducting oneself with honor and integrity. As a result of her actions, she now has zero credibility. Not a single word that passes through her teeth can be trusted. If Trump were to win the election, all the lying and deception would be rewarded. This would be horrendous. For one thing, it would be morally unjust.
In fact, the lying alone provides sufficient justification for not voting for Trump. Furthermore, a win by Trump would lead to a proliferation of more and more deceitful campaigns and candidates, and thus politics in general would undergo a disastrous downward spiral.
If, on the other hand, Trump were to lose the election in an enormous landslide, this would send a very clear message that voters will not tolerate egregious lying. Subsequent candidates would be on notice that they will pay a price for waging campaigns of deceit. Voters possess the power to fix this problem at the polls by rejecting candidates who lie and casting ballots in favor of the virtue of telling the truth.