Exploiting a broken system: Trump's within striking distance of Hillary — and that's mind-boggling

Within our present system, a reality-show demagogue can make a legit run for president — that has to change 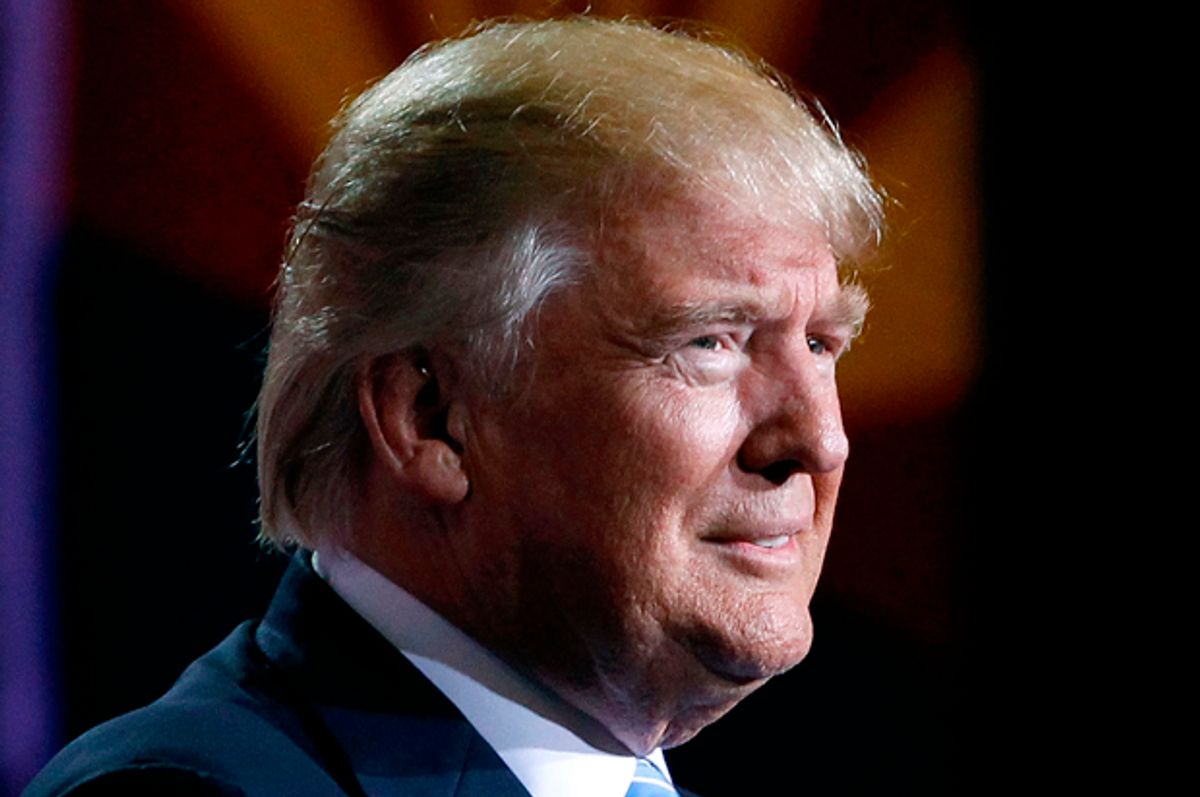 In case you hadn't noticed, the polling gap between Donald Trump and Hillary Clinton is slowly narrowing, according to Nate Silver's FiveThirtyEight.com where Trump has gone from a 12 percent chance of winning to a 27 percent chance in four short weeks. By itself, it doesn't seem all that scary for Democrats, but when we look at the trendlines, the race is clearly narrowing, with no signs of slowing. The latest IBD/TIPP poll shows a national dead-heat, 39-to-39. The Los Angeles Times shows Trump leading by a point, as does the Republican-leaning Rasmussen. Talking Points Memo's Polltracker average has Hillary up by just one.

And the GOP nominee hasn't really done anything specific to warrant such a change in fortunes. In fact, he's done almost everything wrong by a factor of thousands. This speaks volumes about the malfunctioning condition of American politics and the news media, and I'm afraid that all of the garment rending over Trump's individual hourly trespasses is serving to avoid the big picture crisis: Trump shouldn't even be in the race, much less nearly tied with a far more qualified opponent. He's marched through a super-colossal loophole in the system, bobby-pins and border walls in tow, while doing everything wrong.

After watching Donald Trump yelling at the world about immigration Wednesday night, I'm more discouraged than ever about the current state of the American political process. How could this have possibly gone so far? Are we really this vulnerable to the whimsy of necrotic populism? Sadly, we are, and there are scant firewalls to prevent it from happening again and again.

In case you missed it, Trump's whiplash posture — one minute "softening," the next minute going full Hulk Smash! — was on unavoidable display Wednesday, beginning with his awkward meeting with Mexican President Peña Nieto and concluding with what was supposed to be a major policy address, but which ended up being one of the most horrifying presidential-level speeches ever recorded. In addition to the apocalyptic hatred and loudness of Trump's rant, it was, of course, loaded with terrible speechwriting, joined by outright fiction.

For example, Trump went off-prompter to declare that no one knows how many undocumented immigrants are in the United States, saying, "Our government has no idea. It could be three million. It could be 30 million. They have no idea what the number is. . . . But whatever the number, that's never really been the central issue. It will never be a central issue. It doesn't matter from that standpoint."

Nevertheless, we know for a fact that Mexican migration is a net negative with more Mexicans leaving the U.S. than are arriving, and the Obama administration has deported a record number of undocumented immigrants. So, when Trump repeated that the Obama administration has an "open border" policy, he was clearly lying. One out of many lies. But it doesn't seem to matter.

Simply put: Trump is an embarrassment to civilization. A crackpot who exploited a broken party and a broken nominating process to threaten the world. If Trump's brand of undisciplined pandering and screechy malevolence ever becomes the standard for American politics, I don't want any part of it. I can't repeat this enough: We're on the brink of disaster, with roughly five percentage points separating us from Trump and the abyss.

Based on the narrowing polls, and absent any other explanation for it, I'm afraid that a Trump victory is more or less the default outcome for U.S. elections. Unless something's done to fix it, we could permanently become a nation that elects despots and freaks similar to the Republican nominee.

Within our present system, a reality-show demagogue can parlay his tabloid popularity into a run for president. He can win the nomination by appealing to the basest, cruelest, most simplistic instincts of reactionary voters who are too ignorant and lazy to understand the wonky details of public policy and who are mostly brainwashed from within an impermeable bubble in which a limitless geyser of misinformation and propaganda, carefully designed and crafted to tap into the reptilian brains of the poorly educated and easily influenced, has successfully deceived enough voters to openly support this destructive character.

He can emerge from the nominating process more or less unscathed, even though he's blundered into an ongoing series of fatal errors, multiple times per day, then, a few days later, he can somehow gain in the polls simply by not blurting as many racist, insensitive things as he did when he was badly trailing the Democratic nominee.

He can literally sidestep every standard by which all other candidates are expected to achieve, and the news media, along with a frustratingly large chunk of the voting public, will give him a pass anyway. Again, he can say a million things that no other candidate could possibly get away with, and never has, and because the news media has been rendered flaccid before the false accusation of liberal bias, the existential threat he poses — the urgent relating of facts that'd easily disqualify him — takes a back seat to horse-race narratives and smirky roundtables in which, inexplicably, Bill Kristol, who's always wrong about everything, pops up on the liberal network, MSNBC, because who the hell knows.

Worse, and as the polls seem to indicate, this clownish American embarrassment can still win most of the same states won by previous Republican nominees, despite being a proud dilettante — a politically drunken myrmidon with punchline hair. And this amateur will continue to be evenly compared and contrasted with a woman who's objectively lightyears more qualified to be chief executive of the world's last superpower. Yet qualifications and conspicuously vast differences are irrelevant when there's an equivalence quota to fill on cable news.

Even though the Democrats still have a superdelegate firewall, and, by the way, the electoral college was designed by the Framers in part to expressly stymie outlier candidates, the GOP nominating process is without a mechanism to prevent another Trump from getting this far despite himself. The Republican Party needs to devise a firewall now. I mean, right fucking now. If nothing else, Trump's success underscores how the superdelegate system and the electoral college as they exist today are, obviously, crucial to the future of democracy. Without a stopgap on both sides to prevent populist weirdos from getting this far on the backs of screaming yokels and impressionable fanboys, we're vulnerable to many more Trumps. And if you think there can't be a Democratic Trump, you're very wrong. Sadly, however, there are enough Americans with voting privileges who would choose a crazy-bomb like Trump, and this has to be the last time.