Playing for green: A new wave of VR eco-games aims to save the planet

More than 150 million Americans are gamers. Now imagine if the video games actually cleaned up the environment 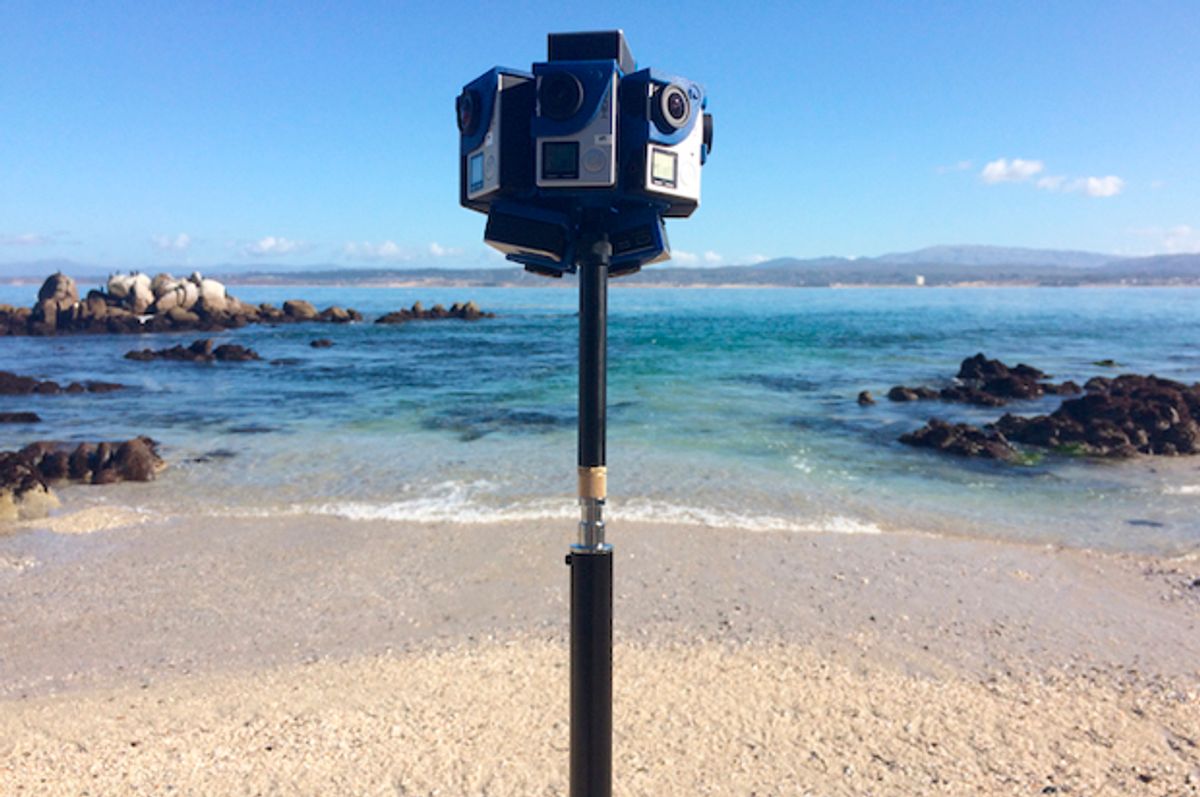 Filming for "The Crystal Reef" in Monterey, CA. (Cody Karutz)
--

Slay Aboriginal peoples with a bow and arrow — that was the mission in Survival Island 3, a video game released in late 2015 and removed from shelves after a change.org petition made the rounds. Then there’s Hatred, in which committing mass murder is the goal. Or Playing History 2, where the challenge is to fit as many Africans as possible onto a slaver's ship in a grotesque version of Tetris. When it comes to the video game industry, if controversy isn't assured, contemptible behavior surely is — remember the raped-and-murdered prostitutes in Grand Theft Auto? Anal probes in South Park: The Stick of Truth? But for the next generation of gamers, the best avatar might not be the one who wreaks the most havoc or horrifies the most mommy bloggers. It may be the one who tackles another, nobler mission: saving a polluted planet.

This is not just a goody-goody ploy meant to pander to the granola-gamer set (which, by the way, is totally real) — it’s about effecting real-world change. This possibility has been creating buzz since Pokémon Go swept the nation this summer, when fanatical hordes searching real neighborhoods for fictional characters rescued abandoned animals, thwarted would-be robbers and, yes, picked up trash. If augmented and virtual reality gaming can lead to such unintended payoffs, imagine the result if social change was built into the game. If the nearly-$24-billion-a-year video game industry throws its weight behind the proposition, could vigilante gamers use their powers for good -- say, cleaning up real oil spills, identifying real poachers in Africa, reducing the size of real giant garbage patches in the Pacific?

“I think it can be done,” Mark Skwarek, Director of New York University’s Mobile Augmented Reality Lab and CEO of Semblance Augmented Reality, told Salon. This semester, he’s expecting more environmental pitches from amateur game designers than ever before. “What you need are smart, dedicated people who are willing to make it happen.”

Enter Aura Higuera Rodriguez and her team of fellow students at Eindhoven University of Technology in the Netherlands, who are developing Doom Prepper Sailors. The game is set 50 years in the future, in an apocalyptic world in which water pollution has led to a plethora of diseases. If this doesn’t sound too different from the state of things today, that’s precisely why the game plays out in the real world of the present day. Players guide 3D-printed, remote-controlled 18-inch-long boats and equipped with sensors and GPS through actual waterways. Points come from identifying areas of contamination in real rivers and streams. Who wins? The high-scorer — and also the environment. The data collected by players gets downloaded to a server and sold to the organizations responsible for cleaning these areas. In the testing phase now, Doom Prepper Sailors’ official release is awaiting financial backing.

“My team and I are members of a key generation that witnessed the change to a digital era,” Rodriguez told Salon. “We were in close touch with our environment during childhood, and we’re working with cutting-edge technology in adulthood. We don’t want to lose our roots, but we want the benefits technology brings, so we have to find the way to correlate them.”

Here in the US, Congress has issued grant money for the development of climate change-related video games. And a game developed by Cody Karutz while he was a student at Stanford University, The Crystal Reef, takes players on a virtual scuba diving trip through the corals of Ischia, Italy. Players take on the persona of a marine biologist, observing and collecting marine life samples from a healthy area before moving over reef that’s been affected by ocean acidification, a byproduct of climate change. Here, snails and octopus are clearly hurting, and algae and seagrass are taking over.

The drama is less obvious than in a shoot-em-up adventure — there’s no chance your biologist avatar will die from lack of oxygen, and none of the octopi morph into murderous robots. But researchers say the focus of the game aligns with the values of a generation that prioritizes experiential purchases, like travel.

“If you’re a millennial who cares about environment and doesn’t want, or can’t afford, to waste jet fuel flying around the world — something that affects the very reef you’re traveling to see — you may be willing to pay $.99 to have that virtual experience, one that’s more ecologically sustainable,” Karutz told Salon.

Besides, experts say Americans are growing more comfortable with the idea of “gradual” drama — the same sense of patience we apply as we wait more than a year for a new season of Game of Thrones, makes us more willing to battle a slow-moving virtual foe, like climate change, versus an intense and immediate threat, like a zombie or terrorist. “Look at the relatively recent explosion of health trackers, calorie counters, and other self-monitoring devices,” Eddo Stern, game designer and professor of media arts at UCLA, told Salon. “These technologies allow you to track things over time, data that is subtly and slowly developing into a narrative. People are getting used to a longitudinal way of looking at drama.”

This burgeoning category of games — most funded by academics, nonprofits and social think tanks — are known in the industry as “serious” games. They serve a social purpose. And, though their higher purposes may make them sound like TV “after-school specials” masquerading as fun, they’ve already proven their worth. Four years ago, Yale University researchers developed a browser game called Planet Hunters in order to help overwhelmed astronomers. To play, citizen scientists of all ages comb through NASA data in search of irregular star patterns that might indicate the existence of a planet — the human eye is better equipped for this sort of thing than a computer. To date, the game’s enthusiasts have discovered more than 40 potentially life-supporting celestial bodies.

For-profit gaming companies have taken notice and are getting in on the action, turning to current events and social issues to create games. The Italian company Inner Void Interactive is developing That Day We Left, a 3D journey in which the characters are Syrian refugees fleeing their country. It’s only a matter of time before the gaming challenge is navigating melting ice caps and rising seas.

Cash prizes don’t hurt. This summer, a contest sponsored in part by Columbia University’s PoLAR Partnership, evaluated prototype video games with environmental themes. The winner of the $10,000 grand prize — an awareness-raising game called ECO in which renewable resources are the new gold coins, and choices made affect the ecosystem — came from Seattle's Strange Loop Games. It is the company's first foray into this new genre, which owner John Krajewski calls “global survivor games.”

“The current direction within the video game industry is an experience that’s less created for players by a designer with a linear purpose, and much more created by the players,” Krajewski told Salon. “That’s a pretty big shift that’s still in its early stages. Having large-scale simulations greatly affected by a player’s actions adds more fidelity and more richness to the fictional world. Tying that into climate change and ecosystems puts it in a real context.”

There are obstacles. Ecological games require developers to rethink the concept of winning. For so long, the first-person shooter who comes out victorious by taking out other characters has been the tried-and-true model. Despite the success of games like Spore — which features no adversarial opponent, and instead involves nurturing an alien creature from microscopic organism to adult — breaking with this convention is still seen as a big gamble within the industry, one which requires a hefty investment, in terms of research and development.

Although attitudes are slowly changing, there remains an industry-wide reluctance to take on partisan themes. “Traditionally, developers have been wary of politicizing games, and how that might turn off a customer base,” Skwarek said. “There’s a rumor that programmers who’ve done this on their own have been blacklisted from jobs at bigger companies.”

However, the overlords of the gaming industry might soon change their tune, according to some experts, as the gamer demographic is maturing, and so are its tastes. Gone are the days of a gamer subculture comprising pimply high school boys holed up in their parents’ basements, getting kicks from digital explosions. With the advent of mobile platforms, a once solitary, indoor activity is finding new audiences — those attracted to the social potential and location-based plots of games like Pokémon Go. Today, more than 150 million Americans – of every race, age, gender and socioeconomic group – play. Increasingly, this includes people following environmental news and policy.

Still, an eco-friendly agenda may sound strange for an industry with a historically large carbon footprint. A study published last year in the journal Energy Efficiency found that gaming computers — the fastest-growing gaming platform — guzzle $10 billion worth of electricity per year. And sales should double by 2020.

But, as Scott Steinberg, an expert in gaming trends and host of the Discovery Channel’s “Next Up,” told Salon: “It’s a pop culture business. As goes the news, so too goes gaming. Developers are going to cater to the tastes of the public. In a way, this will be a bit of a renaissance — some of the first floppy disc games, like Balance of the Planet, focused on environmental issues. Now we’re coming full circle.”

And this time around, the technology has advanced — maybe even enough to save the world.