Sexual awakening in Hawkins: "Stranger Things" explores the terror and the triviality of adolescence

On "Stranger Things," girls are scarier than faceless monsters — and losing your virginity isn't life-or-death 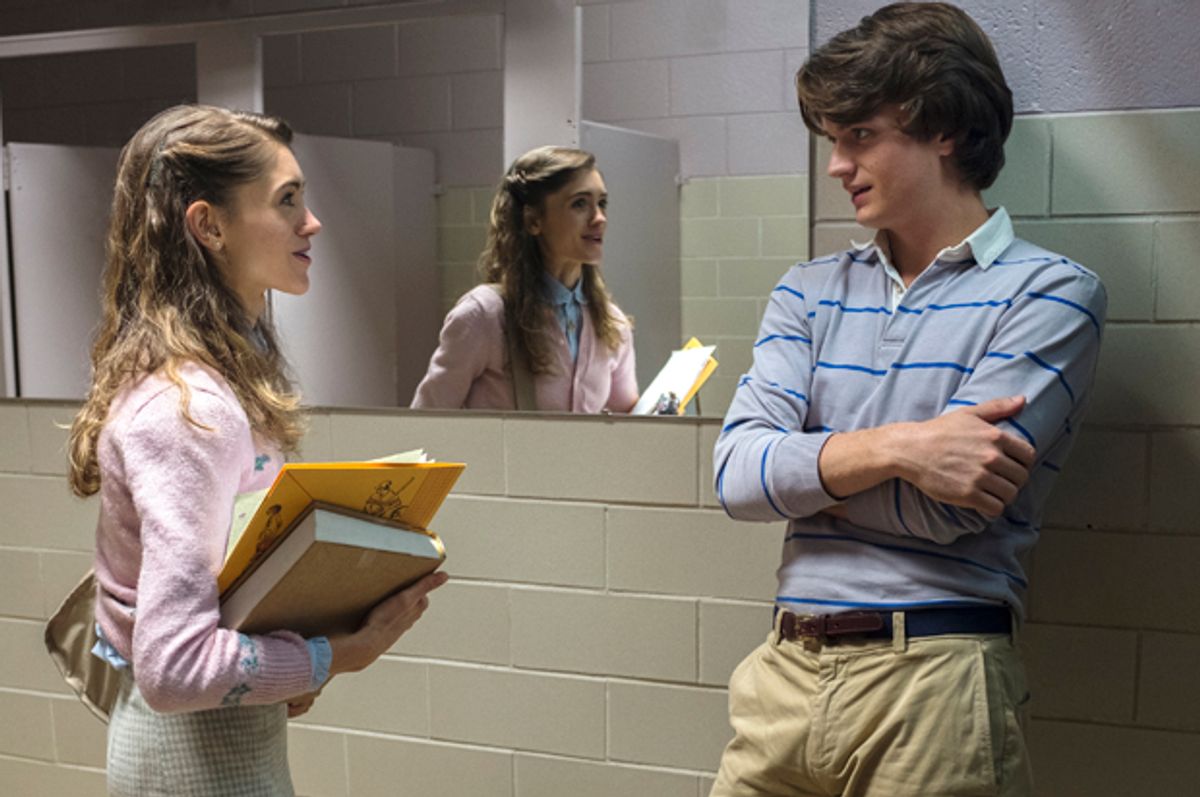 Netflix's summer supernatural drama "Stranger Things," an 8-part series set in a small Indiana town menaced by a mysterious monster and sinister government agents, has earned near-universal praise. At Film Critic Hulk, an anonymous criticism site, “Hulk” bucks that trend, accusing the series of, amongst other things, underdeveloped characters, simultaneously trite and ambiguous messages and, above all, making no sense. In particular, Hulk finds the show's perspective on sexual politics questionable.

“Like even the sexual politics of the show aren't complex or nuanced; they're just vague. It constantly steps into the arena of feeling kind of gross about older photography brother taking nakey pictures of older sister, or the way Eleven just wants to feel pretty, or why older sister is fine with stalker guy. They don't play any of that for conflict either,” Hulk writes. (The review is formatted in Hulk's trademark style, all caps, which I've removed for clarity.)

The depictions of sexuality in the show are deeply interesting and often overturn the clichés Hulk accuses the series of playing to. Let's start with the children. Though much of the show's appeal has been attributed to '80s nostalgia, part of it is also nostalgia for childhood and particularly for childhood play away from the watchful eyes of today's helicopter parents. The series opens and closes with shots of a group of boys — Will, Mike, Lucas and Dustin — playing Dungeons and Dragons. It's not just any fantasy game; it's a fantasy game with meticulously crafted worlds and rules.

It makes perfect sense, in the world of the show, that Mike, Lucas and Dustin would be the ones to figure out, when Will goes missing, where he is and be able to work their way toward him, partly out of a sense of loyalty to their friend, but partly out of the same spirit of adventure and play that motivates their nightly gatherings in small-yet-unknowable Hawkins, Indiana. Glimpses of the mysteriously powerful female interloper Eleven's supernatural abilities are met with fear and awe, but also intense curiosity and, occasionally, delight. In many ways, for the boys, the stranger things they reckon fully with aren't faceless monsters but the looming anarchy of adolescence. The prospect of crushes and kisses breaking up their all-male clique are in many ways more daunting than the danger Hulk confuses for the central tension of the story.

I will certainly grant that Eleven's obsession with her own beauty, after Mike tells her she's pretty when they cover her shaved head with a wig and put her in a dress, was off in a sexist way. The same child who had to be taught the word “friend” apparently needed no explanation for the word “pretty” and immediately began to question whether she fit the bill. It's hard to argue that the need for affirmation wouldn't be highly socialized, unlike her natural thirst for companionship and parental affection.

But Hulk's interpretation of the storyline featuring Nancy — Mike's older sister — seemed to be based on a fundamental misinterpretation. Here, the critic labels an adult's reliance on demonstrably false truisms as the writers' message to viewers:

“The woman in the police station issues the older sister a bit of 'folksy wisdom', telling her 'You better tell him that!' (he's not your boyfriend) inferring 'Only love makes you that stupid.' . . . It is the perfect signifier of everything in this show: Get to the folksy line of rote human insight regardless of whether it's earned.”

But the woman's misread on the situation is meant to be exactly that, and it's one of many illustrations of most adults' complete cluelessness about what is actually happening in Hawkins. Mike and Nancy's mother, bless her heart, tries desperately to get her children to talk to her, and at one point thinks she's cracked the case by ascertaining that her daughter spent the night with a boy. “We slept together!” Nancy readily admits. “Is that what you want to know? It doesn't matter!”

“It does matter,” her mother insists.

But Nancy's right. In the grand scheme of things, sex wasn't the boogeyman it was made out to be. The fact that she had it with Steve doesn't really matter. The fact that her friend Barb went missing — as she later learns, abducted to a dangerous other dimension — while she was doing it does. For one thing, it is a welcome inversion on the horror movie trope, wherein the slutty teen screws her way to an early grave. But within the context of the show, it gives Nancy a sense of purpose and a way of reasserting her strength and independence outside of the arms of her jock boyfriend.

Nancy's relationship with “pervert” Jonathan, the older brother of the missing Will and the only person at first to believe Nancy that Barb didn't simply run away, is another inversion of trope. The woman in the police station referenced above is completely wrong about what made Jonathan behave stupidly. He calmly walked away from a fight, when what was at stake was Nancy's honor, and made no attempt to clarify Steve's misunderstanding, happy to have all involved parties mistakenly believe the two had hooked up. Instead, he was understandably baited into throwing punches when Steve took the cruel step of mocking his kidnapped brother, saying all but “good riddance” to the missing Will.

Steve later recognized he was out of line and proved himself worthy of Nancy's high estimation. But this was redemptive for Nancy as well, who'd insisted he was “a good guy” when others, including Jonathan, rolled his eyes. The show's writers could have had Nancy run from Steve's arms to Jonathan's, but instead they bucked trend yet again. Nancy exhibited agency and wound up with the partner she had a real romantic connection with, not one borne out of shared trauma. She was a fleshed-out character, not a projection of male fantasies wherein the creepy outcast gets the pretty girl.

Season 2 certainly leaves room to slide back toward the banal, but for now it rests comfortably above trite pop culture offerings, complete with overblown dangers surrounding teenagers and sex. If there's one human insight the show most certainly earned, its the recognition that most monsters are of our own making.