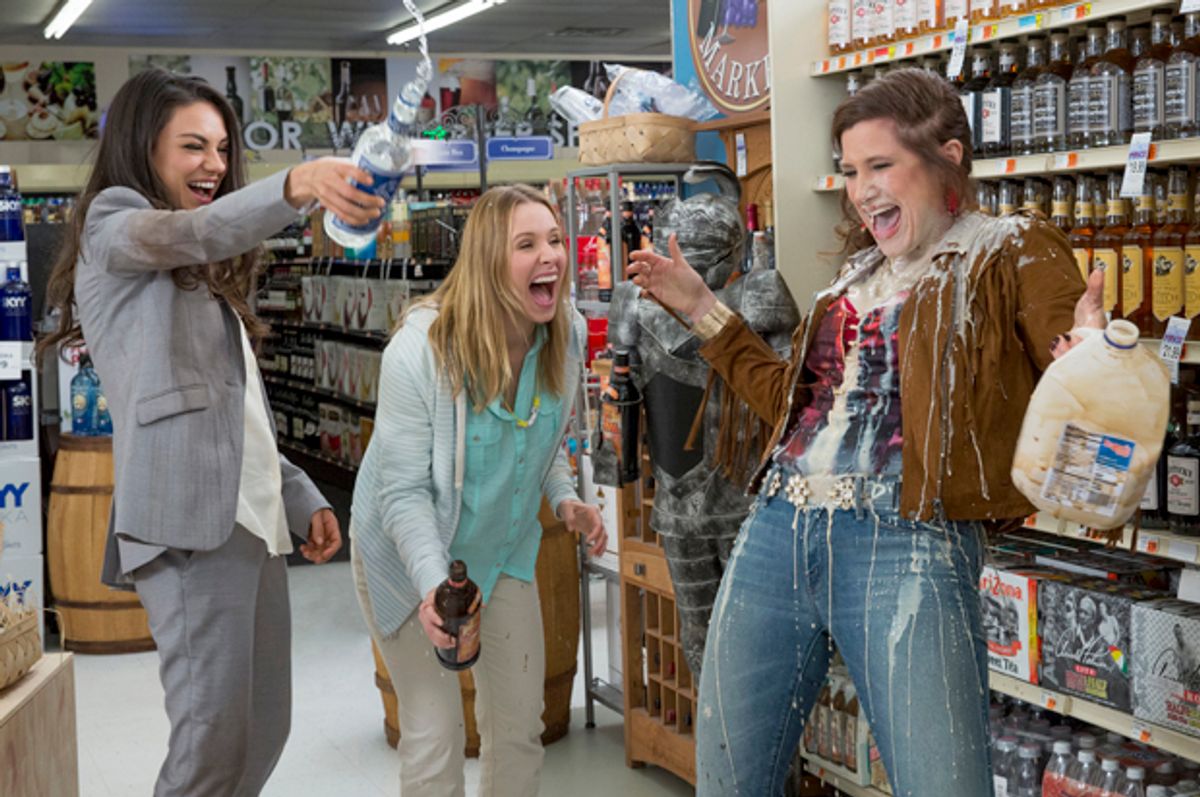 “Bad Moms” is the biggest — and most seemingly unlikely — R-rated comedy smash of the summer.

The film, starring Mila Kunis, Kristen Bell, and Kathryn Hahn, crossed the century mark its sixth weekend in theaters, with $103 million in the bank (and counting). Directed by Jon Lucas and Scott Moore (who wrote “The Hangover” series), the sleeper hit has registered increasingly minuscule declines from week to week: 41 percent, 18 percent, 30 percent, 29 percent, and 14 percent. As Scott Mendelsohn points out in Forbes, its 4.35x opening-to-total-gross ratio is the strongest multiplier since last year’s bear-mauling revenge saga “The Revenant.”

“Bad Moms” was boosted by better-than-expected reviews (a decent 60 percent on Rotten Tomatoes) and strong word of mouth, including an A Cinemascore. That positive buzz kept the film in the top 10 for weeks during a year that’s been extremely unkind to its R-rated competitors. “Mike and Dave Need Wedding Dates,” the Zac Efron-Adam Devine comedy in the vein of “Wedding Crashers,” crashed and burned with just $46 million, and “Neighbors: Sorority Rising” chugged down about a third of what its predecessor made in theatres. “The Boss” was the normally unflappable Melissa McCarthy’s lowest grosser to date.

Those were some of the better results. “Popstar: Never Stop Never Stopping,” a well-reviewed “Spinal Tap”-style satire of the music industry featuring The Lonely Island, utterly bombed in June. The film twerked its way to less than $10 million during its brief, three-week run. “Whiskey Tango Foxtrot,” a dark Iraq war satire designed to announce Tina Fey as a serious actress, was DOA with $23 million.

Why did “Bad Moms” succeed where so many others failed? It’s because the movie did what so many others this year did not — gave women a story they were hungry for.

The film is a bawdy send-up of the absurdity of modern parenting that’s much funnier than it needs to be. Amy (Kunis) strives to be perfect. While working part-time at a hip coffee brewery, she’s the kind of hands-on parent who always makes time to drive her daughter to soccer practice and help her son make a papier-mâché Richard Nixon for a school project. Kiki (Bell) is a stay-at-home parent with four screaming toddlers, who is too busy ironing her son’s underwear (he likes them extra stiff) to wash her hair. Carla (Hahn), on the other hand, throws caution to the wind — swearing, smoking, and drunkenly making out with other women with abandon.

The impossible expectations of parenthood make each of these women miserable in their own ways. Amy, whose husband is cheating on her with a dairy farmer he met on the Internet, longs for quiet time. Her biggest fantasy is to take herself to brunch and read the New York Times in peace. Kiki has a control-freak husband who expects her to do everything. Carla, while thumbing her nose at the conventions of parenthood, longs to be closer to her dim-witted son.

As a critic, I’m of two minds about “Bad Moms.” On one hand, the film puts the “duh” in derivative — a studied hybrid of better, sharper movies. If you don’t recognize bits of “Mean Girls” and “Bridesmaids,” you aren’t trying.

That said, it’s also a knowing and rare reflection of the real struggles that parents face as unsung heroes who are expected to do everything and have no time left for themselves. When developing the project, Moore and Lucas interviewed their own wives and women they knew about the double-edged sword of motherhood, in which doing something as seemingly simple as whipping up cookies for the bake sale becomes a labyrinthine saga of navigating the myriad allergens of the sixth-grade class. When instructed to make cookies with no soy, no dairy, no gluten, no wheat, and no MSG, Kiki astutely asks: "What do I have left?"

In the age of Tiger Moms and Helicopter Parenting, “Bad Moms” offers mothers everywhere a much-needed message: “Do less.” You don’t have to be a wife, a cook, a tutor, a chauffeur, and a part-time therapist. You’re allowed to sleep in, stay up late, and party like you didn’t miss out on your 20s.

That theme clearly resonated with the audience of mostly middle-aged women I saw “Bad Moms” with on Monday evening. They loved it, erupting into a burst of applause as soon as the credits began to roll. There’s a lot to like. Hahn, who you might know as the no-nonsense campaign advisor from “Parks and Recreation” or Rabbi Raquel on Amazon's "Transparent," gives a star-making performance. The 43-year-old has never been more delightfully unhinged. The film, a wish-fulfillment fantasy about getting revenge on the Mean Moms of the PTA, also caters to the needs and inner longings of women with children that few films outside of the “Magic Mike” series do.

That quality leads to the film’s most eye-rolling moments, in which “Bad Moms” gets very speech-heavy for a frothy studio comedy, but how many movies this year even bothered to pander to the same demographic? There was the atrocious “Mothers’ Day,” whose generic greeting card quality can be summed up in a Meghan Trainor tune that graces the closing credits: “You might have a mom / She might be the bomb.” Mothers might want to see their stories represented on screen, but they don’t want to be treated like post-op lobotomy patients.

“Bad Moms,” while no means a classic, speaks to the concerns of some contemporary women at a time when most movies view the middle-aged as if they had recently been raptured. As a study from USC Annenberg found, just 35 percent of characters from movies and TV shows are over 40 — and very few of those characters are women. “Bridget Jones’s Baby,” which will debut in two weeks, has been the object of intense scrutiny for months just because its star, Renee Zellweger, dared to age in a medium where women are rarely allowed to grow older onscreen.

“Bad Moms” is correct in suggesting that all of us who struggle to be perfect parents, spouses, and friends could do just a little bit less. But would it be too much to ask for Hollywood to do more?