Clinton BS Files: Is Hillary a secret lesbian? Not that it matters at all, but probably not 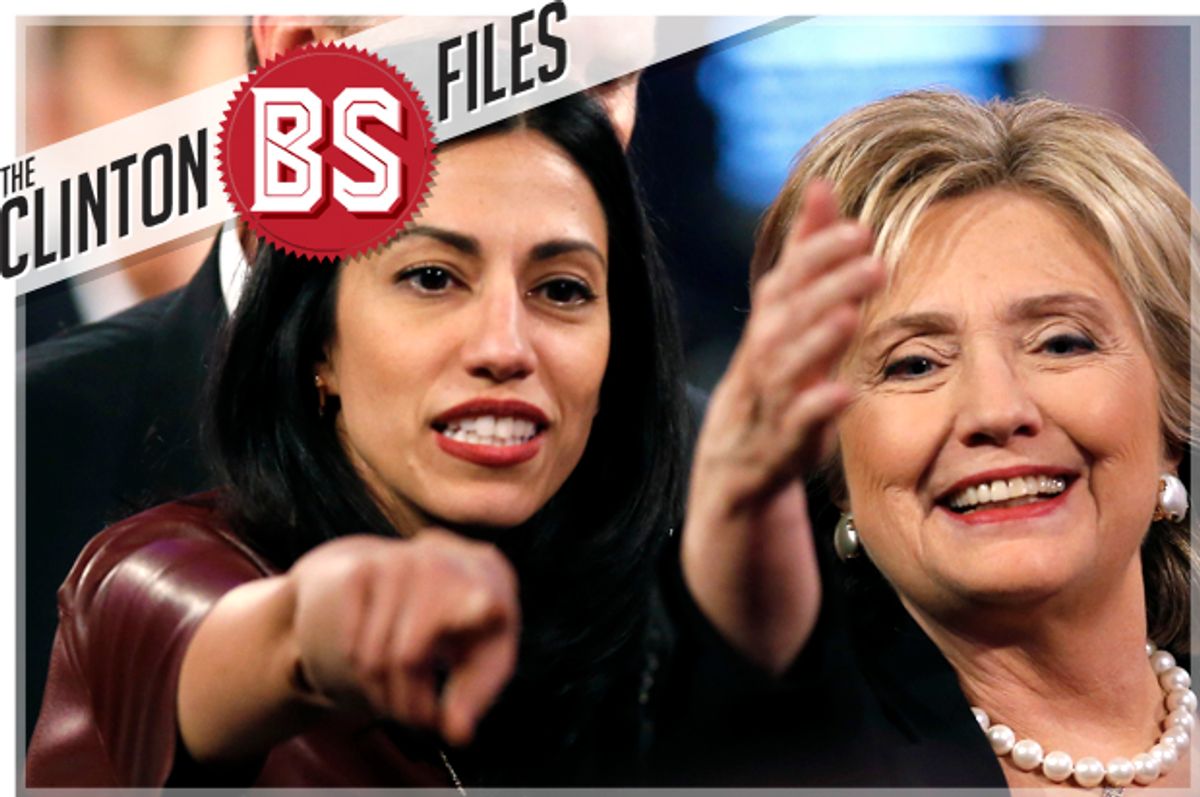 Bill and Hillary Clinton have been plagued by conspiracy theories throughout most of their life in the public eye, perhaps more than any other politicians in history. The Clinton BS Files are a weekly in-depth look at the stories behind some of these conspiracy theories. You can read last week’s post here.

Last week, Hillary Clinton's long-time close aide, Huma Abedin, finally announced her separation from her embarrassment of a husband, Anthony Weiner. The reaction in much of the right-wing media was to regurgitate long-standing rumors that Clinton is a lesbian and that she's having an affair with Abedin.

Matt Drudge chose to wink at the rumors, running a picture of Clinton hugging a woman who turned out to not be Abedin. Another photo at least got the names right but was clearly chosen to imply that Clinton and Abedin coordinate their outfits. The headline's implication is that Abedin is done not just with Anthony Weiner but weiners generally, as if anyone could blame her after how much penis-based humiliation she's endured over the years. (To be clear, human sexuality doesn't work this way. If men being jerks was enough to turn women gay, there would be no straight women left.)

The rumors that Clinton is a lesbian have been around since she first peeked her head out in public, and the reason isn't exactly obscure: That's just what misogynist asshats say about women who dare consider themselves the equals of men. The rumor isn't just misogynist either but also homophobic, in that it assumes "lesbian" is an insult.

At their core, the lesbian rumors were about delegitimizing the Clinton marriage.

From the day the Clintons set foot on the national stage, conservatives set out to portray Hillary Clinton as something other than a genuine wife to Bill Clinton because in their minds real wives are subservient to their husbands and the patriarchal order in general.

At the 1992 Republican National Convention, Pat Buchanan focused heavily on scaremongering the crowd about Clinton's feminism:

Elect me, and you get two for the price of one, Mr. Clinton says of his lawyer-spouse. And what does Hillary believe? Well, Hillary believes that 12-year-olds should have the right to sue their parents, and Hillary has compared marriage and the family as institutions to slavery and life on an Indian reservation.

Well, speak for yourself, Hillary.

This, my friends, is radical feminism.

These fears were most famously brought to bear in the spring of 1992, when conservatives freaked out because Clinton, in justifying her decision to be a lawyer instead of a housewife, said, "I suppose I could have chosen to bake cookies and have teas, but I chose to fulfill my profession."

For weeks, the press dined on smarmy stories where housewives postured in outrage at this supposed insult. In March 1992, UPI went to Peoria, Illinois — because, of course, it did — to find an angry housewife. The news outlet hit pay dirt with Ginny Marriot, 45, who protested Clinton's remark by mailing her cookies.

"I really hate to destroy her image of the housewife but I have never had a tea," Marriot said in a remark that makes about as much sense as the choice to punish a person by giving them cookies.

Even though the Clintons sent Marriot a letter explaining they had no ill will towards housewives, she vowed to UPI to keep sending cookies.

"But even a protest has its priorities and, as always, Marriott's first thoughts were for her husband and child," the story concluded. "She baked three dozen cookies — but only sent one dozen to the Clintons."

"When Hillary Clinton, would-be first lady, spoke of 'staying home and baking cookies' and 'standing by your man' as if they were deadly sins for modern women, I was stunned," Alcestis R. Oberg wrote in a huffy op-ed for USA Today that same month. "How can the Clintons make motherhood, monogamy and now cookie baking politically incorrect and expect to win?"

It was in this context that the "Hillary is a lesbian" rumors flourished, as a quick shorthand for the conservative assumption that heterosexuality for women is inherently a submissive pose. But while conservatives were clearly trying to insult Clinton by calling her a lesbian, for LGBT people the idea that the first lady was secretly sapphic had a campily fun appeal.

Writing for the oddball zine Hillary Clinton Quarterly in October 1993, Liza Featherstone reported that many gay people were having fun with the rumors.

As for the rumors about the First Lady herself, the innuendo from the gay community has been largely playful. In March, on Arsenio, lesbian comedian Lea DeLaria said she was happy that “Finally in this country we have a First Lady that you could boink.” At April’s Gay, Lesbian and Bi March on Washington, one popular T-shirt showed Hillary and Tipper scantily clad, posing in Sapphic embrace. The caption: “Get it Girls!”

And the zine further reported:

The Hillary Clinton Lesbian Rumors have surfaced in gay and feminist circles, but always attributed to nobody in particular. One member of the Lesbian Avengers in New York told HCQ “We’ve all heard the rumors that she fooled around (with women) in college. But who doesn’t?” Donald Suggs concurs. “Everybody’s heard of those rumors, and there’s no reason to think that she is. But I’m sure if she were a lesbian, she’d be proud of it.”

Gay rights have dramatically become a mainstream cause in the past few years, making Matt Drudge's sniggering innuendo even more tiresome and juvenile even to people outside hip liberal circles.

But these rumors that Clinton is a lesbian were never really about homosexuality — not really. They were always a way for sexists to chew over their fears of female empowerment and of having to treat women like equals, instead of cookie-baking appendages for men.