“I am looking forward to my downfall”: Herman Koch on life as a bestselling author

Salon talks to Herman Koch about writing his new novel "Dear Mr. M," tolerance and why "humor is the salt" in books 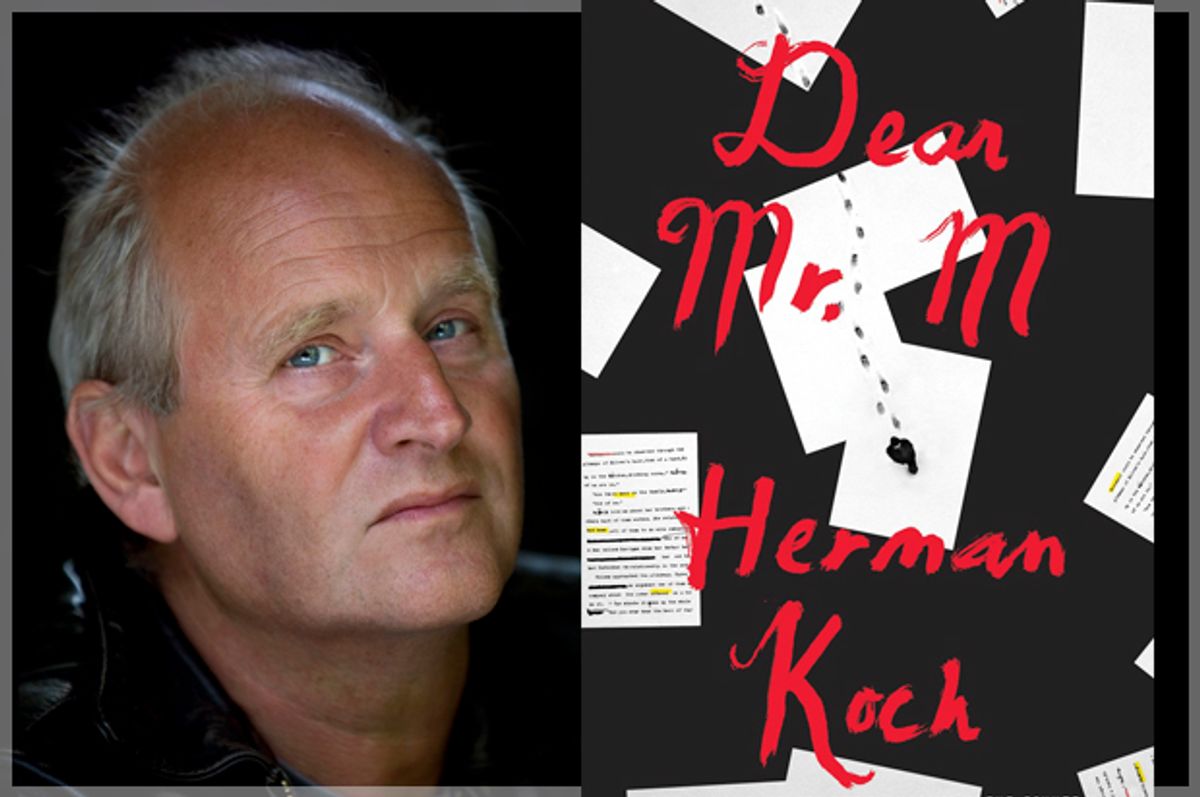 What does it feel like to write a bestselling novel? While reaching a clearly defined goal might be satisfying for most, I’ve met many authors who remain restless. When I consider the personality type it makes more sense as they tend to be a critical and questioning bunch. And for those who are often prone to disillusionment, the writing life offers a sort of let-down buffet; the bestselling book didn’t also win a coveted prize, a similar book was the one picked by Oprah, the novel did well in Italy but tanked in France, a critic singled it out for a special round of scorn.

In his forthcoming book, "Homo Deus: A Brief History of Tomorrow," Yuval Noah Harari talks about the problem of achieving happiness and how we tend to feel satisfied when reality matches our expectations. But most people hit a “glass ceiling of happiness.” As our conditions improve, expectations balloon.

My experience of meeting authors with unmatched expectations was part of the reason why I was so pleasantly surprised to meet Herman Koch, author of the international bestseller "The Dinner." Having sold more than 1 million copies internationally, "The Dinner" won the most prestigious Dutch literary award, was made into a Dutch film and is being adapted for a 2017 film in English starring Chloë Sevigny, Steve Coogan, and others. Koch’s next novel, "Summer House with Swimming Pool," was published to wide acclaim and his newest, "Dear Mr. M," comes out today, having already been an instant runaway success in the Netherlands.

All this success, and yet Koch seemed to be a rare thing, an author who was something close to happy. He talked about his love of writing, peppered the conversation with his wry humor (“I can’t smoke anymore, but my characters do so that I can enjoy a cigarette vicariously.”), and described his daily writing routine with a firm affection. The more we talked, the more I became convinced: This was a writer who had achieved critical and commercial success and managed to keep his expectations in check.

So I laughed when I read the plot description of Koch’s new novel, "Dear Mr. M," about an author with expectations that no longer match his reality. Years before, a teacher had an affair with a young student. Then a teacher went missing and the student and her boyfriend, Herman, were suspects, but charges were never laid. Years later an author, Mr. M, wrote a fictionalized account of this true crime and the book became a huge bestseller. As the novel opens, Mr. M is promoting a new book, but his career is fading and his best days are clearly over. When a man moves into the apartment beneath Mr. M., the man starts watching the older writer, peaking at his mail, approaching his wife and child, and obsessively critiquing his writing. When the mysterious man finally approaches Mr. M, it’s as a journalist. He wants to do an interview that will restore the author’s reputation and give him a rightful place in the literary cannon—or so this man wants Mr. M to think.

"Dear Mr. M" is a gripping read with an elegantly layered plot that asks questions about the process of writing, where does an author gets his ideas, how does reality become fiction, what it is like to do an author tour, and how it feels when a reader has his own interpretation of your work?

After reading the novel, I wanted to know how much was drawn from Koch’s experience and where he drew the line between fact and fiction. Putting ourselves into the plot, I played the role of journalist, while Koch pretended to be a famous author doing yet another interview. Among other things, we talked by email about how it feels to write a bestseller, whether Koch has peaked and how his downfall might feel.

"The Dinner" was such a huge success. Have you peaked?

I am not sure. Maybe we will be able to tell in 25-years time? With every new novel I hand over to my publisher I tell him: "This is the book that will make readers stop talking about 'The Dinner.'"

I sometimes think: Let's hope this one will make them forget about "The Dinner" altogether.

Is that an uncomfortable question, to be asked if you have peaked?

I really felt I peaked when I saw my first novel in print.

Your novels often make me uncomfortable, like the feeling I get when a comedian says something so true that it hurts, but I still laugh. Is causing discomfort in your readers something you purposefully do?

It is something I can't avoid.

At the same time I make myself uncomfortable and that is my first goal: Do I still identify with this or that character or has he lost me? I try to stretch this feeling as far out as possible.

For the reader the experience is different. One will make his distance in an early stage of the book, another will stay with the character who produces uncomfortable feelings until the last page.

There is an exchange in "Dear. Mr. M" where two characters lament that the Dutch used to be known around the world for their liberal attitudes, but now people only pay attention to the increasingly visible right-wing extremism. In this conversation, the novel questions the meaning tolerance — something that is often upheld as a virtue. Here I go feeling uncomfortable again, why?

Maybe it is because tolerance always had such a nice ring to it.

Up until now we were congratulating ourselves on our tolerance, but from a position of luxury in a free world where the few immigrants from poor and funny countries only had to be tolerated to make us feel better about ourselves. This came from a feeling of superiority. Maybe it makes you (and me) feel uncomfortable because we would never want to be labeled with the opposite classification: Intolerance. But I am quite sure that we all are far more intolerant than we would like to admit. You don't have to be right-wing to have these feelings.

I think of a political figure like Trump. Do you think that his rise is connected to this liberal idea of tolerance?

In a way it is, but I think tolerance is only a small part of the picture. You could even accuse Donald Trump of being too tolerant on a lot of issues, among them Vladimir Putin. I think his rise is far more connected to the once silent-majority and now quite loud minority. People are angry. Very angry about a lot of things, most of all of not being taken seriously by the more liberal (tolerant) part of the population.

Yes, I am. But this is also a small joke. I like characters who explain their theories about writing (or about life or almost anything) and then act in the opposite way. This is what I do myself most of the time.

Under the dark suspense of your novels runs a strong current of humor. In Dear Mr. M, it often comes from the author poking fun at himself and his life as a well-known writer. What role does humor play for you as a writer?

For me humor is the salt in the meal, it has to be there, anyway for me it comes quite natural, I simply can't avoid it. I don't want to write 'funny' books where we all have to laugh our heads of all the time. The humor should come from behind, where we don't expect it. And the life of a well-known writer is something you can laugh about quite easily.

"Dear Mr M" is astonishing because of how, unlike life, it all comes together. By the end, the reader realizes the extent of its intricate construction. Did you plan the plot in advance of writing the book?

No, not at all. I went from chapter to chapter, part to part. I can't work in any other way, I have to feel the suspense myself, if not I get bored. I would be very bored if I were just following a scheme.

But of course in the end I have to check if everything fits in the way I hope: How old was this person in 1971, can he/she be married thirty years later and have children? This is extra work, but it is fun to do.

The novel has multiple narrators who see one event through very different perspectives. How did you pull it all together?

Instead of an omniscient narrator I prefer these personal voices of one narrator at a time. It makes it possible to view the characters in a different light. Herman sees his neighbor-writer differently as to how we see him when we come to know him better, from his own point of view.

Isn't it a big risk to start a complex book like this when you don't know the end?

Yes, in a way it is. For example when I started the book I knew that a high school teacher went missing in the seventies. During the writing of about ninety percent of the book I had not the slightest [idea] what had happened to him. Sometimes this made me nervous. But the advantage is that the reader can't have a clue either, as I didn't.

Does taking this kind of risk feed the suspense in your writing in some way?

Yes, the not knowing makes the writing more interesting from day to day, and I believe it is exactly this that makes the reader want to read on.

Have you ever started a book that didn't work?

Maybe about four or five. I have written about forty or eighty pages and then I wanted to get rid of the idea as soon as possible. So I start something else.

"Dear Mr M," your eight novel, is out now. Is it still a thrill?

Yes, it is. But not the same thrill as thirty years ago. As with the first kiss, the first love, the first time, something wears off.

Do you worry that this book won’t do well? Maybe you have peaked?

No, as I said before: "peaking" doesn't enter in my vocabulary that much. In a rather morbid way I am looking forward to my downfall ("He had completely lost it, read this (...)". At least this would be a new experience, maybe even something to write a book about.

Claire Cameron’s most recent novel is “The Bear,” which is just out in paperback. She is a staff writer at The Millions, and her work has appeared in The New York Times, The Globe & Mail and the Los Angeles Review of Books.