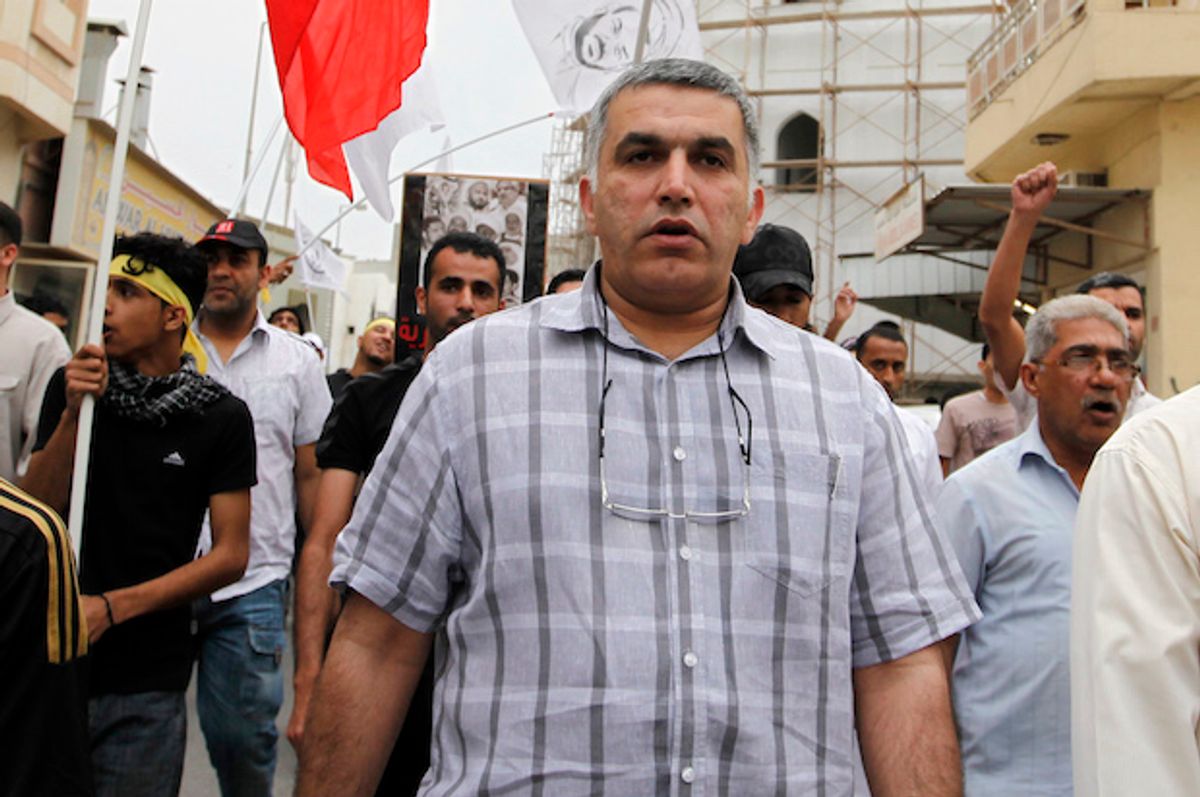 Bahraini human rights activist Nabeel Rajab marches in a protest in the village of Bilad al-Qadeem, west of Manama, on April 1, 2012 (Reuters/Hamad I Mohammed)
--

A prominent human rights activist who already faced up to 15 years in prison for Twitter posts has now been hit with another charge after writing publicly about his Kafkaesque case.

The Gulf monarchy Bahrain, a close U.S. ally, "is a country that has subjected its people to imprisonment, torture and even death for daring to desire democracy," Rajab wrote. "No one has been properly held to account for systematic abuses that have affected thousands."

Salon had just reported on Rajab's case the day before he published the article. On Friday, 33 non-governmental organizations sent a letter to Bahraini King Hamad al-Khalifa, calling for Rajab's release.

Immediately after his Times piece was published on Sunday, Bahrain hit Rajab with another charge, accusing him of publishing "false news and statements and malicious rumors that undermine the prestige of the kingdom."

The Bahrain Institute for Rights and Democracy reported that Rajab was twice interrogated by Bahraini authorities after writing the article, and was denied access to a lawyer.

The new charge could add yet another year to his potential prison sentence.

“Anyone can read the words of Nabeel Rajab in the New York Times to see how pathetic this charge — which is completely contrary to the principle of free expression — is," said Sayed Ahmed Alwadaei, the director of advocacy at the Bahrain Institute for Rights and Democracy.

Alwadaei accused Bahraini authorities of "punishing anyone with a contrary opinion" and attacking "the most basic universal freedoms."

In June 2015, he was arrested yet again. Rajab has remained detained since then, and faces up to 15 years in prison for tweeting about rights abuses and atrocities committed by Bahrain and its ally Saudi Arabia.

Bahrain accused Rajab of spreading “false or malicious news, statements or rumors” on his popular Twitter account, where he has more than 325,000 followers. Specifically, he is being retaliated against for tweeting about allegations of torture at Bahrain’s Jau prison, where Human Rights Watch has reported allegations of severe prisoner abuse.

Rajab also faces years in prison for “offending a foreign country” — Saudi Arabia — for informing people about the atrocities committed by the U.S.-backed, Saudi-led coalition in Yemen.

"Index on Censorship is appalled at this latest move by Bahrain to suppress Nabeel Rajab’s free speech," said the free speech advocacy group's CEO, Jodie Ginsberg, in a statement.

Ginsberg called on Bahrain’s allies "to speak out now, publicly condemn this charge and call for Nabeel’s immediate release."

As Salon previously reported, Bahrain is a close U.S. ally. It is home to the Navy’s Fifth Fleet and has a free trade agreement with the U.S. The State Department calls the repressive Gulf monarchy “a vital U.S. partner in defense initiatives.”

In his piece in the Times, Rajab criticized the U.S. for allying with the Bahraini regime. "Is this the kind of ally America wants?" he wrote. "The kind that punishes its people for thinking, that prevents its citizens from exercising their basic rights?"

Rajab, the president the Bahrain Center for Human Rights, is also a member of the Middle East advisory committee at Human Rights Watch.

Approximately 4,000 political prisoners join Rajab in Bahrain. The tiny monarchy has the highest prison population per capita in the Middle East.

Rajab's colleague Abdulhadi al-Khawaja, the co-founder and former president of the Bahrain Center for Human Rights, is serving a life sentence in prison after leading pro-democracy protests during the 2011 uprising. Al-Khawaja's daughter Zainab has been imprisoned multiple times for her peaceful activism.

Husain Abdulla, the executive director of the advocacy group Americans for Democracy and Human Rights in Bahrain, called on the U.S. to take a stronger stance.

“The entire case against Nabeel Rajab has been a sham from the start, and this new charge further shows it to be nothing but an attack against free peaceful expression," he said in a statement.

"Its time for Washington to send a strong message to its ally that it will not tolerate such blatant repression by suspending all arms sales with the Al Khalifa regime," Abdulla added.

The U.S. State Department has publicly called on Bahrain to release Rajab. It also said it has “raised concerns with the government of Bahrain, particularly on this case.” But Rajab argues the U.S. is not doing enough.

"Recent American statements on Bahrain’s human rights problems have been strong, and that is good. But unless the United States is willing to use its leverage, fine words have little effect," he wrote in the Times.

Rajab continued, "America’s actions, on the other hand, have emboldened the government to detain me and other rights advocates: Its unconditional support for Saudi Arabia and its lifting of the arms ban on Bahrain have direct consequences for the activists struggling for dignity in these countries."