Devil in the pulpit: Trump’s visit to a black church was racial stagecraft aimed at gullible whites 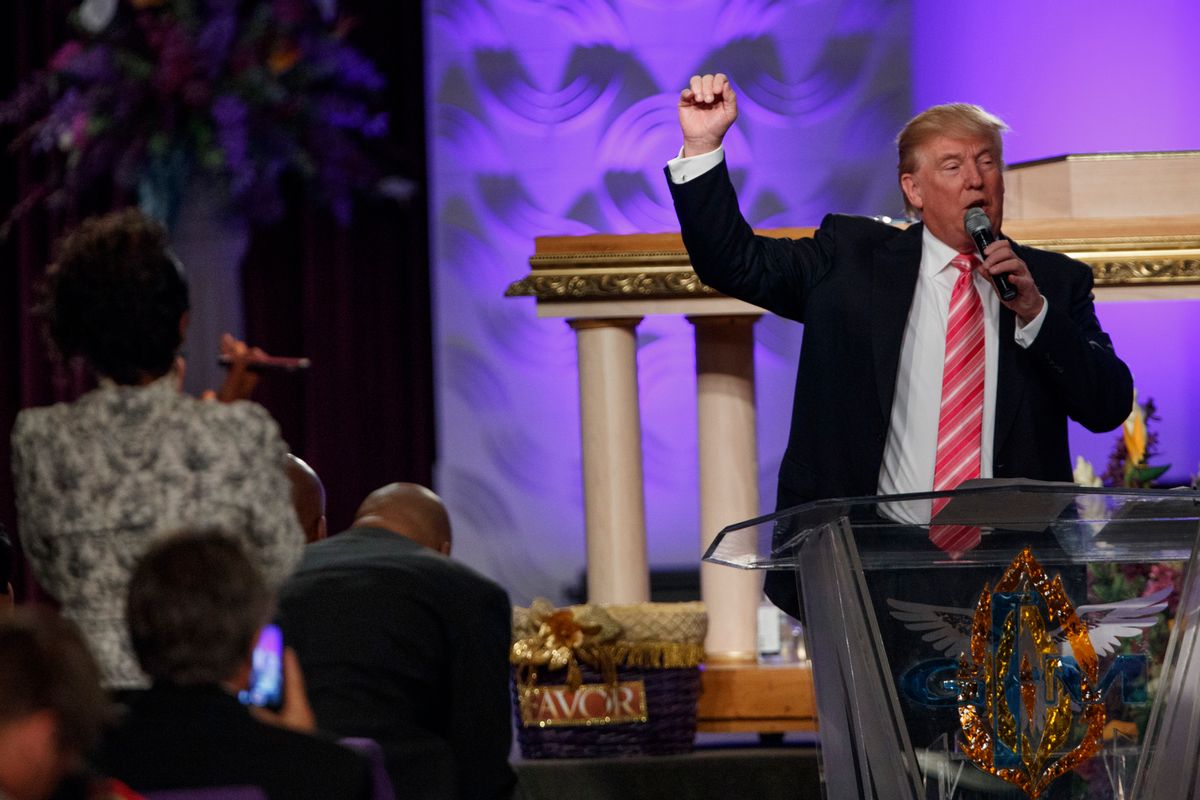 The devil's in the pulpit.

As part of his fake black outreach campaign, Republican presidential candidate Donald Trump offered empty promises to a largely empty church in Detroit last Saturday. The pieces of silver and gold in the pockets of the black Judases who invited a white bigot into the Great Faith International Ministries church jangled in their pockets.

With his prepared comments at the ready, Donald Trump addressed the several dozen people in attendance — black human props, serving as the professional “best black friends” of a Republican Party where racism and conservatism are now one and the same thing — and offered up his plans for uplifting the African-American community.

Trump faced a challenge in that church on Saturday: He has repeatedly said that the lives of African-Americans are horrible, their communities are where hope goes to die, and black folks are an undifferentiated mass of suffering negritude who are waiting for a (white) savior. How then could he transcend an outreach campaign which began by calling the people whose votes you want to win a bunch of “losers” stuck in a dystopian hell?

The answer: He could not.

Trump tried to explain to the few attendees at Great Faith International Ministries church that he is not a racist. In reality, Donald Trump is a victim. And as is their habit, the mainstream news media has been unfair to him. Trump also wants racial harmony and unity. “Our nation is too divided," he observed. "We talk past each other, not to each other. Those who seek office do not do enough to step into the community and learn what is going on.”

These are absurd comments from a practiced liar.

Donald Trump is the very definition of a bigot and a racist. His presidential campaign is fueled by racial animus, disunity and disharmony. To wit: Trump has suggested that a Mexican-American judge is unable to treat him fairly because his ethnic background creates bias and a conflict of interest. For Trump, “blood” is character. This is white supremacist pseudoscience. He has slurred Hispanics and Latinos as a group comprised of rapists and murderers. Trump and his father were repeatedly sued for racial discrimination in housing. He has surrounded himself with and is endorsed by white supremacists, Ku Klux Klan members, neo-Nazis and their sympathizers. Trump has also said that black people are inherently lazy and that only “Jews” should count his money. In violation of the United States Constitution, Trump promises to ban an entire group of people from immigrating to the country based on their religion, and has said that on the day he takes office he will create a Gestapo-like force that will, without proper due process, forcibly deport millions of “illegal aliens.”

Like other Republicans, Donald Trump would claim the honored mantle of the African-American civil rights movement and wrap himself in the lineage of Abraham Lincoln and the long black freedom struggle.

The Republican Party’s policy proposals for dealing with inner-city poverty, “race relations” and “civil rights” are tired and tedious. They consist of vague promises about “economic opportunity” that fail to address wealth and income inequality, and neglect to mention how right-wing policies created many of the problems that afflict poor and working-class American communities on both sides of the color line. Republicans — and too many Democrats who have also been bitten by the neoliberalism bug — believe that charter schools, privatization and “choice” will provide a path to economic uplift through improved public education. Like most right-wing economic policies, this too is a lie. Charter schools often provide worse educational outcomes compared to public schools and exist mostly to transfer increasingly scarce public resources away from the commons and into the coffers of rich elites. Most importantly, Republicans also hold onto the delusion that by ignoring structural and institutional white supremacy the specific problems it causes can be magically cured.

Serious scholars study the past in order gain a better understanding of the present. By comparison, today’s Republicans mine the past to further whatever lies and deceptions they want to perpetrate in the now.

Like Dr. Martin Luther King Jr., Abraham Lincoln is a fetish object for Republicans. King was a democratic socialist whom Republicans want to conveniently claim as one of their own; Lincoln and the Republican Party of the 19th century were much more radical, liberal and progressive on matters of race than the GOP of today. When talking to black Americans, Trump and his fellow Republicans bloviate on cue about “the party of Lincoln” and the “Great Emancipator.” But of course, these same individuals would reject plans for slavery reparations, the post-bellum expansion of the federal government which served to protect black freed people’s civil rights, provide land to poor farmers, and other forward-thinking and progressive policies put in place by Republican-controlled Reconstruction-era governments to improve public schools, roads and other services. Moreover, the Republican Party’s decades-long obsession with “small government” (language that is itself a racially coded dog whistle) has more in common with Democratic president and Southern sympathizer Andrew Johnson than it does with Lincoln.

Ultimately, if Trump and the Republican Party were actually serious about “civil rights” they would back legislation to hold America’s police accountable for thuggish and illegal behavior towards people of color, stop gerrymandering and using restrictive (and increasingly illegal) voter identification laws to suppress the political participation of non-whites, support the enforcement of laws that ban racial discrimination in housing and employment, and support the Black Lives Matter movement.

In his speech at Great Faith International Ministries church, Trump said, “I am here today to listen to your message.” The audience for such words is not black and brown Americans, a group too smart to be suckered in by Trump’s fake outreach campaign. Those who would actually lap up such false pronouncements are the white Republicans and rightward-leaning independents that are trying to find a way to convince themselves to vote for a racist and a bigot while somehow still believing they are good and decent people.

Good and decent people will not vote for Donald Trump. Smart and observant people most certainly do not think that his black “outreach” campaign is real and sincere.