"Star Trek" in the age of Trump: Why we need to embrace its 50-year mission now more than ever 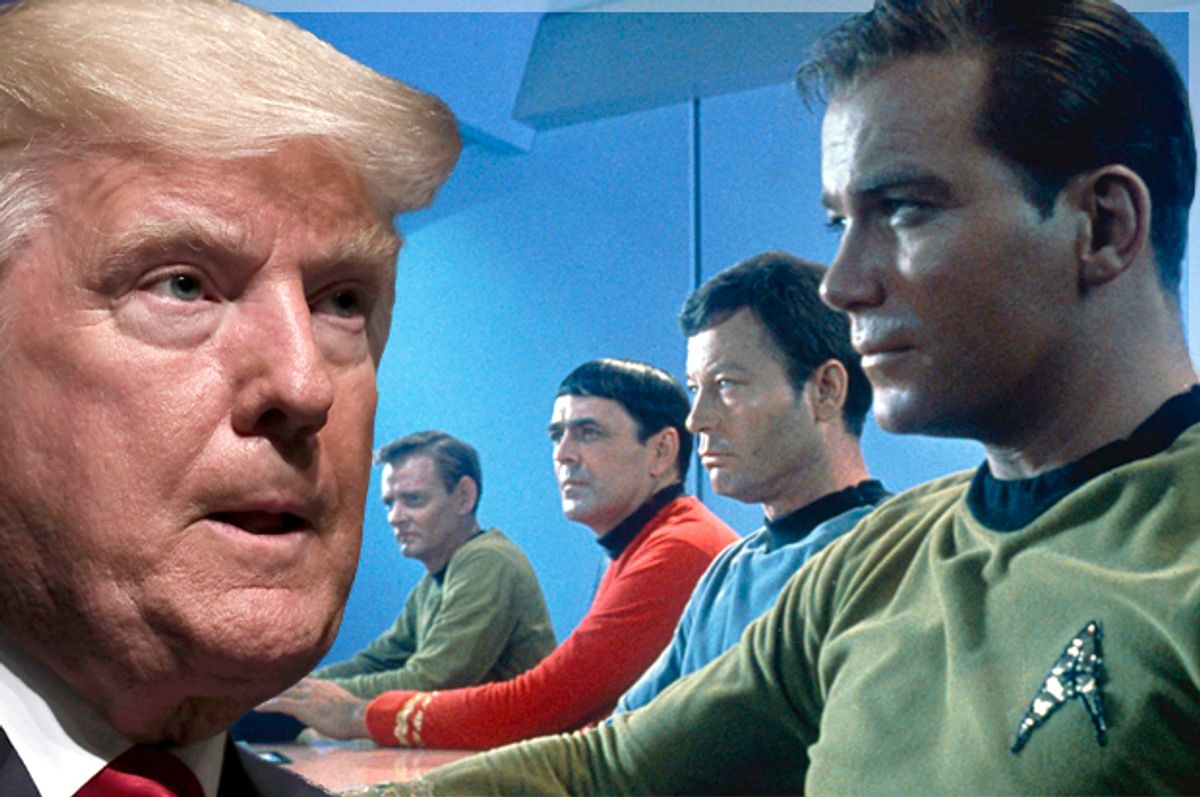 These are the voyages of the Starship Enterprise. Its five-year mission, no, wait, 50-year mission: to explore strange new worlds, to seek out new life for itself, to boldly remain relevant across space and time.

And it has. Especially today, in the age of Donald Trump's presidential campaign, the message of "Star Trek" — openness, harmony and the spirit of exploration — feels more applicable than ever.

The unstoppable science-fiction franchise turns 50 tomorrow, with the first episode having hit NBC airwaves on Sept. 8, 1966. Over its subsequent half-century run, "Star Trek" has spanned 13 movies, including a new installment, "Star Trek Beyond," which opened in July. There have been six TV series (a seventh comes in 2017), plus a handful of fan-created homages. The "Trek" phenomenon has also inspired Trekkers to dress in costume, collect merchandise, buy comic books, adopt the Vulcan salute "Live long and prosper" and quote lines from movies as daily parlance.

But unlike Kirk, Mr. Spock, Dr. McCoy and their shipmates, who traveled to new worlds every week, Americans remain, like Khan, the show’s recurrent fictional villain, marooned on a somewhat hostile planet. Just as Khan was exiled to Ceti Alpha V, where he forged a new society, most of us — for the time being at least — are stuck on planet Earth. Here in 2016, our nation is engaged in its own terrestrial wars between alien-like political foes — Democrats versus Republicans, conservative Christians against Muslims, police supporters against Black Lives Matter activists, the haves battling the have-nots.

In these contentious times, the spirit of "Star Trek" still speaks to us.

What the show has always boldly declared is this: Disregard the doomsayers, those who predict our species' demise, those who look to disharmony. Instead, the goofy, awkward optimism of the "Star Trek" franchise suggested, Aim forward into a future of cooperation and harmony.

Sure, if you're gold-shirted officer Kirk, you get to sleep with wayward crew and alien species from time to time. If his bedroom shenanigans were a bit self-serving, didn't that amorous touch also foster interspecies understanding? By and large, he came in peace.

This fall as the presidential race hits warp speed, "Star Trek" still offers a vision of how we could and should be. (Depending on which Romulans or Changelings you speak to, Hillary Clinton is either one of the gold-shirted good guys or a nefarious Orion slave girl bent on revenge; Trump is either a warmongering Klingon or a disposable Redshirt who doesn't survive the episode.)

"Star Trek" first launched during a time of great unrest: the 1960s. The ground war in Vietnam had been launched in an effort to stop Communist expansion in Asia. On the homefront, racial tensions flared and violence erupted. Fears about overpopulation and environmental destruction haunted Americans. Yet here was a show whose multiracial, multiethnic, multinational and, yes, multispecies crew worked together. From Spock to Uhura, Chekov to Sulu, "Star Trek" proposed a melting pot of humans, male and female, white and black, Asian and Russian — and even Vulcan — who all work together toward a common goal. In “Star Trek: The Next Generation,” the diverse crew even included a robot, Data, and a member of a onetime enemy species, the Klingon Worf.

That mission was the exploration of space, "the final frontier," in the spirit of knowledge and science.

This vision is a powerful counter to Trump’s demagoguery, which places the problems of our country at the feet of "bad people" from foreign lands, who have darker skin, who practice alien customs and who, we are told, mean us harm. For Trump and the supporters he engages, our differences aren't outweighed by what we share. Trump's vision of the future depends on having enemies to attack — Hillary Clinton, Mexican immigrants, Fox News' Megyn Kelly. What would make America great again, in his mind, is more mistrust and taller walls.

This hive mind-like approach is not unlike that of the cybernetic Borg of "Star Trek" who want to assimilate every foreigner they encounter.

Imagine a son or daughter of an undocumented immigrant on Trump's crew. That's not the galaxy Trump that lives in. Perhaps in an alternative universe, he might embrace these ideals, and the legions of white nationalist, neo-reactionary, alt-right nativists might be less afraid of “the other.” But until we invent a way to travel through a wormhole — or send Trump and his ilk through one — making his supporters feel less paranoid and less likely to blame anyone but themselves for their problems isn't going happen anytime soon.

The four-year mission of the U.S.S. Trump could not be more opposed than the original five-year "Star Trek" mission of cooperation, adventure and hope.

Let us hope that it is Trump who is the alien species, not those of us who believe in science, exploration and a peaceful universe. After all, you can't build a wall in space.