Trump's clueless generals: No one should be impressed by the military minds backing The Donald 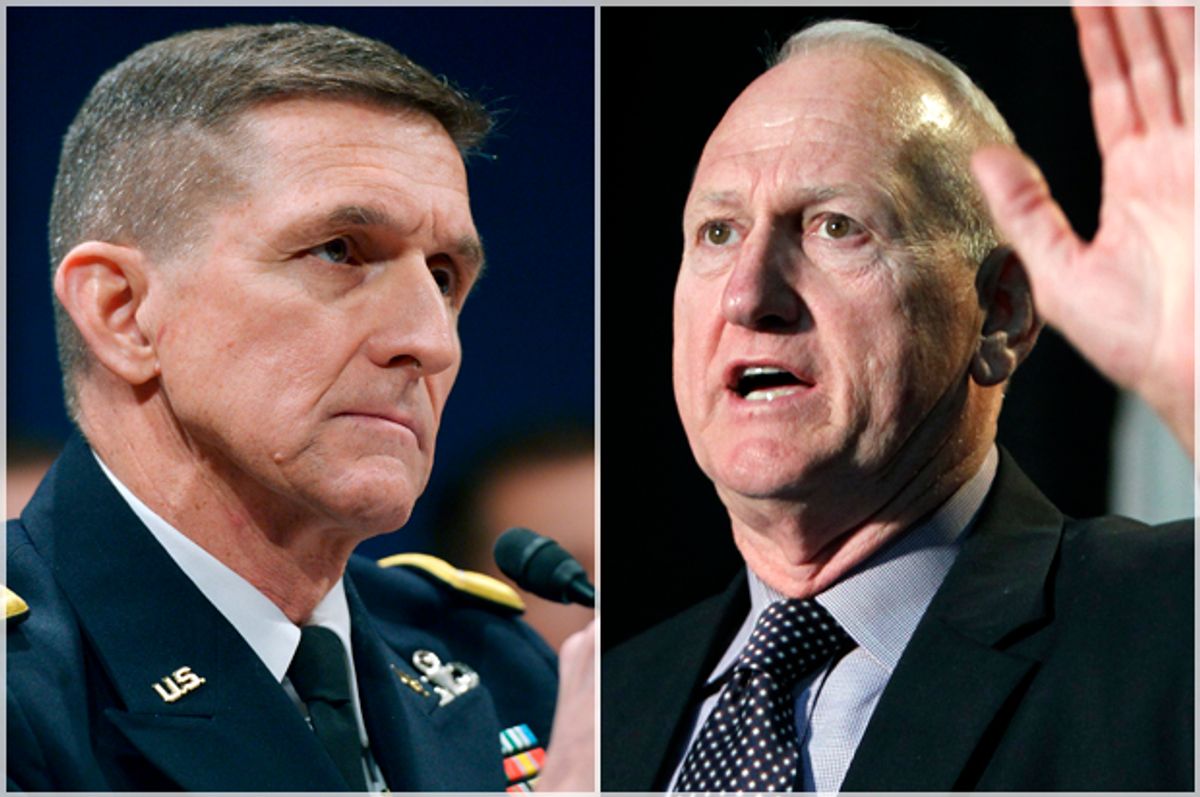 Facebook
Twitter
Reddit
Email
view in app
Whenever one brings up the historic nature of Hillary Clinton's campaign, someone inevitably chimes in with a list of other women leaders like Margaret Thatcher, Angela Merkel and Golda Meir among others as if to say that it's not particularly noteworthy. But even with those precedents, what makes Clinton's possible presidency a true milestone is the fact that she would be the first female commander in chief of the most powerful military on earth, the world's only superpower.
In that regard, Elizabeth I of England provides the only real comparison and the world she commanded was a much smaller place. One suspects that this monumental development lies at the heart of some people's misgivings about Clinton, even if they aren't aware of it.

Donald Trump is fully aware of it and is making it a central part of his argument in these last few weeks of the campaign:

“Does she look presidential, fellas? Give me a break.”

It's pretty obvious what he means by that. Women don't look like presidents.

A rather formidable number of foreign policy and national security experts from both parties have endorsed Clinton over Trump including some high-ranking members of the military. But Trump has now pulled together a list of more than 80 retired senior military officers who would rather have an inexperienced demagogue for commander in chief than Hillary Clinton.

The list was put together by his No. 1 fan General Michael Flynn whose most memorable moment in the campaign was his rousing speech at the Republican National Convention which he capped by leading the bloodthirsty crowd in chants of "lock her up, lock her up!" Although Trump has proudly proclaimed that he knows more about ISIS than the generals do, Flynn is by all accounts Trump's foremost national security adviser — which is somewhat concerning since he has teamed up with one of the most hysterical neoconservative writers in the country, Michael Ledeen, on a book about Islamic terrorism. (Ledeen's most memorable essay during the run-up to the Iraq war was a speculative piece that France and Germany were literally in cahoots with al Qaida.)

Even more concerning is this incoherent analysis that Flynn published in an op-ed for the New York Post:

We’re in a global war, facing an enemy alliance that runs from Pyongyang, North Korea, to Havana, Cuba, and Caracas, Venezuela. Along the way, the alliance picks up radical Muslim countries and organizations such as Iran, al Qaeda, the Taliban and Islamic State.

That’s a formidable coalition, and nobody should be shocked to discover that we are losing the war.

He added Russia to the mix later on, which is kind of surprising since he's one of the leading promoters of Russian President Vladimir Putin in the Trump camp. This is all, to put it mildly, nuts. Governments in Caracas, Tehran, Moscow and Pyongyang are not in a "coalition" of any kind. Anyone who thinks they are is not someone who should be taken seriously.

Unsurprisingly, Flynn was fired as head of the Defense Intelligence Agency for his radical views and he retired from the military. Generals who want to start World War III are probably not a good fit for a superpower that wishes to remain sane and rational.

Another name on Trump's list that leaps out is General Jerry Boykin, who was last heard claiming that the U.S. is leading a holy war of Christians versus Muslims and being blasted by the Pentagon for writing a book full of classified information. The list of weirdness from this fellow, now an executive with the Family Research Council is a mile long. My personal favorite is his contention that "Jesus, who was a real “man’s man,” will return to earth carrying an AR-15."

Like Trump, he also believes that President Obama is a secret Muslim working on behalf of terrorists. In that he would be in the good company of another endorser, Lt. General Thomas G. McInerney, who challenged the president's eligibility for office in a court of law, asserting that he couldn't prove he was a U.S. citizen.

The rest of the signers may not be quite this radical, but simply supporting Donald Trump puts them in the "Strangelove" category of wacko generals at this point. The good news is that compared with 2012 Republican presidential candidate Mitt Romney, who had more than 500 on his list, Trump got a rather pathetic number of endorsers.

All of this was done as a lead up to tonight's "commander in chief" town hall forum in which both candidates will appear separately and take questions from the audience. They both previewed their appearances yesterday. Clinton held a rally in Tampa Florida where she promised, "We are going to work with our allies, not insult them. We are going to stand up to our adversaries, not cozy up to them. We are going to have real plans, not claims and secret plans."

At the same time, Trump held a very friendly Q & A in Virginia with General Flynn in which he said Vladimir Putin "looks at Hillary Clinton and he smiles, boy would he like to see her . . . because just look at her decisions. Look how bad her decisions have been." He shared his deep knowledge of the complex dynamics in the Middle East:

When asked about the threat of cyberterrorism he had this to say:

You know cyber is becoming so big today. It's becoming something that a number of years ago, a short number of years ago wasn't even a word, Now the cyber is so big. You know you look at what they're doing with the internet, how they're taking recruiting people through the internet. And part of it is the psychology because so many people think they're winning. And you know there's a whole big thing. Even today's psychology, where CNN came out with a big poll, their big poll came out today that Trump is winning. It's good psychology.

The fact that 88 generals actually believe the country is safer in this man's hands than the experienced, qualified woman is almost more disturbing than the man himself. Almost.