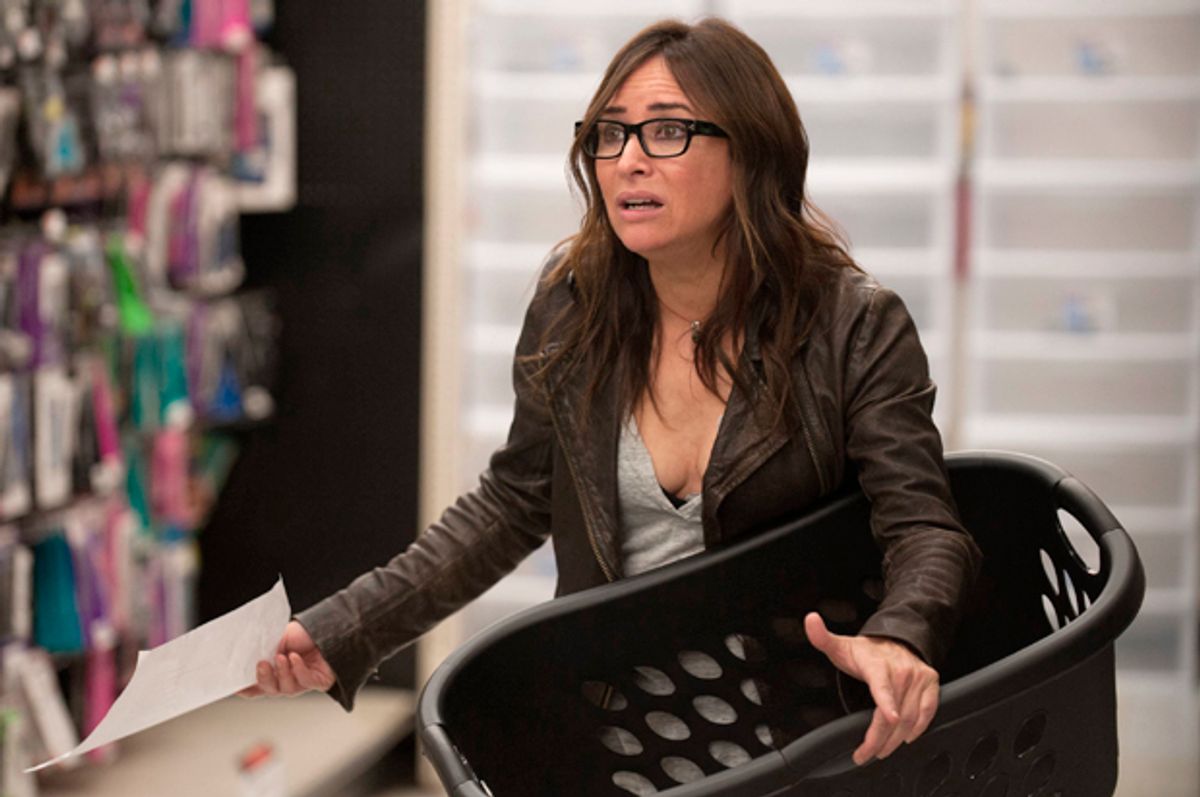 A cold open for an episode of FX’s “Better Things” shows Pamela Adlon’s Sam Fox trudging down a path toward a soccer field, dragging a cooler full of treats in one hand and clutching a bag that’s almost as big as she is in the other arm.

It’s a simple tracking shot, and as she determinedly scrapes her way down the concrete, the simple walk seems to stretch on forever. Suddenly, her grimace breaks into a bright manufactured greeting for the people waiting for her, because that is her mission as a mom: to make sure nobody sees the huff and toil that goes into creating joy for others.

Parenting and family life provide the starting point for most comedies, but “Better Things,” which premieres at 10 p.m. Thursday on FX, is oriented by Sam’s life as a middle-aged woman above all else, which informs her take on solo parenting three daughters. Make no mistake, Sam’s kids Max (Mikey Madison), Frankie (Hannah Alligood) and Duke (Olivia Edward) are the center of her world. When she tells a friend who's checking in about her romantic life that she’s dating her daughters, that’s no joke.

Yet Sam must also navigate the entertainment industry as a woman of a certain age, who has a history as a child star but who has been relegated to voiceover work in order to make money. She’s a known quantity but has ripened beyond the point of being able to headline a show, and that’s fine. Juggling the needs of Max, a self-centered adolescent; Frankie, a burgeoning activist; and the cute-as-a-button, precocious Duke is enough of a task on its own.

And that’s about as concrete a summary that you’re likely to get about “Better Things,” a loose, vérité-style comedy that barely hews to plot or form from episode to episode. Each installment is a meandering visit to Sam Fox’s life, which is to say an episode may begin with Sam facing one problem and end in a completely different place.

That the characters have tomboyish names speaks to the insouciance with which Adlon and her co-creator Louis C.K. upend our preconceived notion of what a female-centric comedy should look and feel like. Sam and her kids are loud, brash and barely organized, but they are unquestionably loved — and love madly in return. A trip to the office-supply store can be as crazed and challenging as a conversation in the car, when Sam’s daughter asks her to obtain clean, organic pot for her. “You should want me to have good nugs!” Max whines.

“Max, honey, can we just go back to regular hard things? Like school supplies?” Sam replies, adding, “These things are normal, but you should be ashamed of them.”

“Better Things” finds comedy in such mundane moments, making it at once universal in tone and intimately autobiographical. Its naturalistic feel shows us the dance of modern female adulthood like no other series on television without coming across as maudlin or peddling unrealistic imagery. Sam is no superwoman: She runs herself into the red raising these girls and has to sneak moments time to herself in the spaces left over between taking care of them.

And those spaces are increasingly minuscule: Duke needs cuddles and validation. Frankie has no sense of boundaries, busting into her room without knocking. Max, meanwhile, is on the verge of entering the world and masks her adolescent inadequacy by lashing out with her mother and threatening to leave her for their absentee dad.

Louis C.K. shattered the concept of what a television comedy must be via his FX half-hour “Louie,” in which Adlon frequently guest stars, and that exploration continues here, albeit with a higher-powered guest star list — starting from the very first episode. C.K.’s fingerprints are all over “Better Things,” with his serving as a writer or co-writer with Adlon on each of the first five episodes and directing the pilot.

True, the Fox family lives in a very nice house in Los Angeles, a luxury afforded by a life spent working in the entertainment industry — one of many traits Sam shares with Adlon, an actress whose Hollywood resume extends as far back as the early '80s, when she was a teenager.

But as one of the kid’s enlightened teacher puts it, Sam is an earner. Her job takes her out of town fairly often and she leaves the kids in the hands of several woefully inadequate caretakers. Her British ex-pat mother Phil (Celia Imrie) lives across the street (just like Adlon’s actual mom does) and is a reliable source of petulance, selfishness and booze. Her chosen career is one requiring the fortitude to put up with constant rejection and the pragmatism to know when to walk away, which is sharply illustrated in an audition scene featuring Constance Zimmer.

Sam’s girls, meanwhile, make messes to clean up, test her patience and whine to her about situations that barely matter in the larger scheme of things. They’re embarrassed by her and adore her completely. The purity of feeling in “Better Things” weaves their stories together in such a way that feels warm and real. Yet many of the most successful moments within the five preview episodes made available to critics stem from Sam’s professional and personal lives crashing into one another.

Episode 3, “Brown,” underscores this idea when Sam generously extends a dinner invitation to the director of a project that she’s working on (played with studied averageness by Lenny Kravitz). When they get back to her house, she’s horrified at the swirl of chaos that her daughters have made of her home and at an encounter with casual bigotry in a place she would never have expected.

But much of the show’s commentary is subtler than this, made in the course of Sam and her kids simply living their lives. “Better Things” is unquestionably female focused without ignoring Sam’s need for male companionship, not to mention her struggle to have her valiant efforts as a single mom validated by her children.

The girls refer to their dad in moments of frustration and crisis. But when their needs are dire, it’s their mom that they turn to. And in one very touching scene, as Sam entertaining her male and female friends, Max shares an honest moment about feeling the aimlessness of adolescence, only to be reassured by the adults in her life that feeling adrift becomes routine with the passage of time.

Accepting that idea may smooth viewers into embracing the wandering style of “Better Things” as well. At the very least it makes a person appreciate the show’s dedication to unpredictability and the magic that exists in the ordinary, hectic world of mothers raising and loving their daughters.