Food prices keep on dropping, which is giving Americans extra cash to spend — unless you’re a vegan 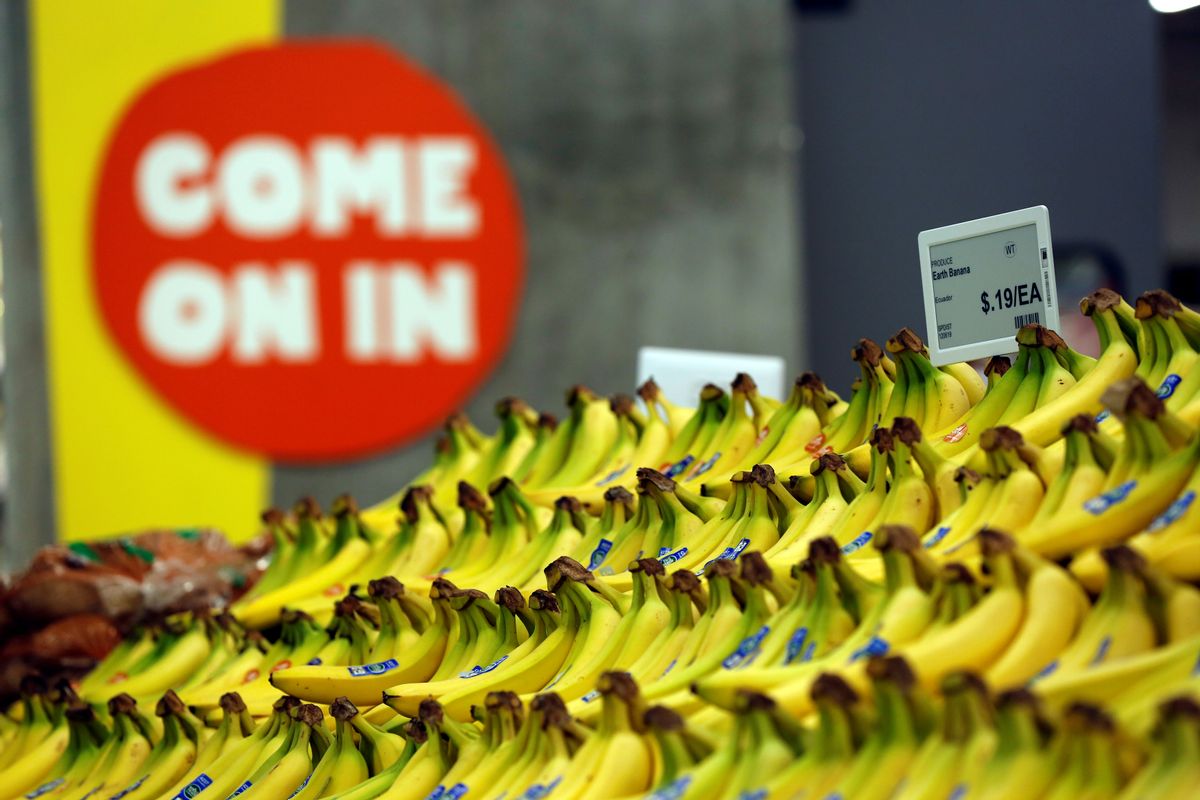 The price of bananas is displayed on a digital price tag at a 365 by Whole Foods Market grocery store ahead of its opening day in Los Angeles, U.S., May 24, 2016. REUTERS/Mario Anzuoni/File Photo - RTX2KM4W (Reuters)
--

Leah Waters, a married mother of two boys, said she’s noticed a significant drop in some key items at Aldi, the German global discount supermarket chain she frequents in Oklahoma City. The store's sales flyer this week touted eggs at 69 cents a dozen and chicken thighs at 69 cents a pound. A gallon of milk at the local Braum’s ice cream and burger outlet is about $2.50, some 50 cents less than a year ago.

“Eggs and milk, for sure,” Waters told Salon when asked about noticeable drops in food prices. But, she added, “canned goods and fresh produce are as expensive as ever.”

American household-budget planners like Waters are reaping a bounty these days as the United States is on track for its longest streak of falling food prices since the 1960s. While a relentless drought in California has driven up the prices of many varieties of fruits and vegetables, these costs are more than offset by steep declines in staple perishables.

Just look at the latest official data: Compared with last year, the average American city shopper is paying 2 percent less for pork chops, 5 percent less for boneless chicken breasts and 12 percent less for ground beef. A similar pattern is playing out with milk, cheese and white bread. Eggs prices are down the most, about 40 percent, to a nationwide average of $1.54 a dozen.

Couple those declines with an average 20 percent year-over-year drop in gasoline prices in July, and the daily pocketbook expenses of a typical U.S. household have declined significantly, freeing up cash to make other purchases in the economy. Presidential elections are so often determined by how comfortable the typical household feels about its economic conditions, and right now, consumers are more confident than they’ve been in nearly a year with just two months before they go to the polls. One reason is that they can stock their fridges without feeling the pinch.

While this drop in prices in the United States has been great for consumers — especially carnivores — it's been hard on the U.S. farm belt, which just three years ago saw farmers and ranchers digging out from one of the worst droughts in recorded American history. Back then the weather drove up the cost of livestock feed used in the meat and dairy industries, sending prices skyward at the grocery store.

Today the opposite is happening as global demand for U.S. crops has withered. Recessions in Russia and Brazil and a slowdown in demand from China, the world’s second-largest economy, have knocked down the value of U.S. agricultural exports. The global slowdown has driven up the value of the mighty U.S. dollar relative to other major world currencies, raising the prices of U.S. exports, driving demand down further. This means U.S. grain silos are packed, lowering feed prices and encouraging overproduction. Meanwhile, low energy prices are making it cheaper to move refrigerated food around the country.

“If you’re a farmer it’s bad,” Gus Faucher, deputy chief economist at PNC Bank in Pittsburgh, told Salon. “Lower food prices is certainly beneficial to the economy overall but there are pockets that are getting hit.”

Indeed, many dairy farmers are either dumping milk into manure pits or considering doing so. The U.S. Department of Agriculture recently bought $20 million worth of cheese and $12 million worth of eggs and egg products for nutritional assistance programs in an effort to support farmers through the current gluts. And ranchers, who stocked up on cattle to take advantage of a post-drought rebound in 2014, are now set for a record year of beef production, which is lowering their profit margins. (Again, not everything is cheaper. Fruit and vegetable prices have risen 1.4 percent compared with last year and those for processed foods remain relatively unchanged since the raw ingredients used to make them are only a portion of the production costs.)

But Faucher said despite the harm to U.S. farmers and ranchers, the net effect of lower food prices benefits the economy — so long as core inflation, a measure of the cost of goods and services excluding gasoline and food prices, continues to rise. While low prices are welcomed by consumers, falling prices across an economy is a sign of trouble because it indicates that people, businesses and governments aren't spending less money and this is a common symptom of economic recessions. Currently core inflation is lower than where the U.S. Federal Reserve believes it should be — a paltry  annualized rate of 1.6 percent in July.

Analysts expect low prices for meat and dairy products to continue to lower grocery stores bills at least until the end of the year, which means the holiday season will be easier on household budgets. Unless, of course, you’re a vegan.