Though potential privacy issues abound, the companies themselves don't seem too concerned 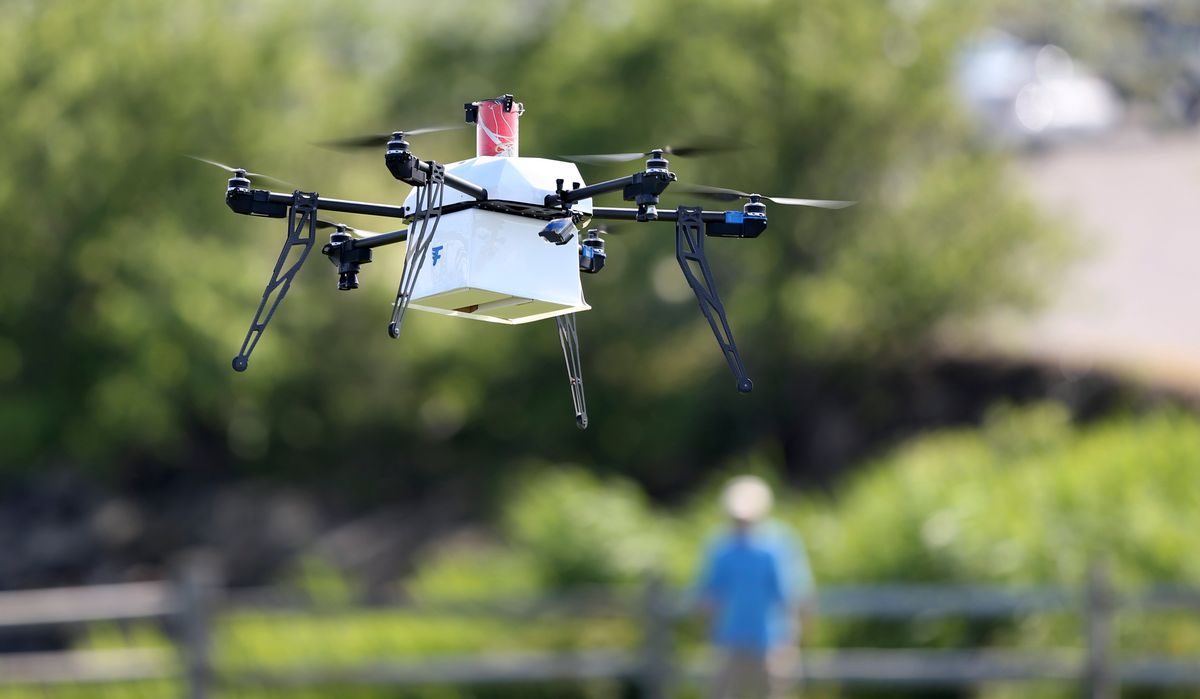 A drone aircraft with a payload of simulated blood, and other medical samples flies during a ship-to-shore delivery simulation Wednesday, June 22, 2016, in Lower Township, N.J. How to distribute lifesaving supplies quickly and safely after a natural disaster has long been a puzzle for responders. Now, drones might be the lifesaver. That idea was put to the test this week on the New Jersey coast as a drone delivery conducted test flights to help determine whether drones can be used to carry human medical samples to and from areas during major natural disasters. (AP Photo/Mel Evans) (AP)
--

Epson announced that it will be partnering with unmanned aerial vehicle manufacturer DJI to create "augmented reality smart eyewear" that can be used to pilot drones from a first-person perspective.

Epson's Moverio BT-300 AR smart glasses, which will begin shipping late in 2016, will allow drone pilots "to see crystal clear, transparent first person views from the drone camera while simultaneously maintaining their line of sight with their aircraft." The "smart eyewear" will be marketed as an accessory to DJI's Phantom, Inspire, and Matrice platforms.

Both Epson and DJI aim to take advantage of new FAA regulations that went into effect last week and vastly expanded the potential number of drone pilots. Such pilots, DJI's Michael Perry said, "will make flying and filming safer and help users stay in compliance with federal regulations."

Also, of course, privacy issues abound, as granting drone pilots the ability to see through their drone's eyes inevitably raises the specter of potential abuse — be it invasion of personal privacy or corporate or military espionage.

Neither Epson nor DJI seemed too concerned about such violations in the official press release, however. As Eric Mizfuka, the product manager for New Ventures for America said, the main concern is that "this is the first time AR smart glasses will be widely available for a mass-market consumer application, marking an historic milestone in the evolution of the category."

UPDATE: Salon corresponded with DJI Technology's Adam Lisberg after this story was published. According to Lisberg, "[t]he smart glasses don’t change anything about the ability of a drone to see things from the air; that’s been the case for several years. I’d very much like to give you DJI’s view of the privacy issues involved – in short, there are already laws against unlawful surveillance and other concerns, but there’s no reason to treat a drone with a camera as completely different than a person on the ground with a camera. Taking pictures in public is legal, until and unless it abridges on other rights."

Lisberg also noted that "it is utterly incorrect to claim that Michael Perry doesn’t think expanding the base of drone users is a good idea. Drones are bringing benefits to millions of people around the world, and when even the FAA is excited to expand the base of drone users, you can be assured that a senior official at the world’s largest drone maker thinks so too."