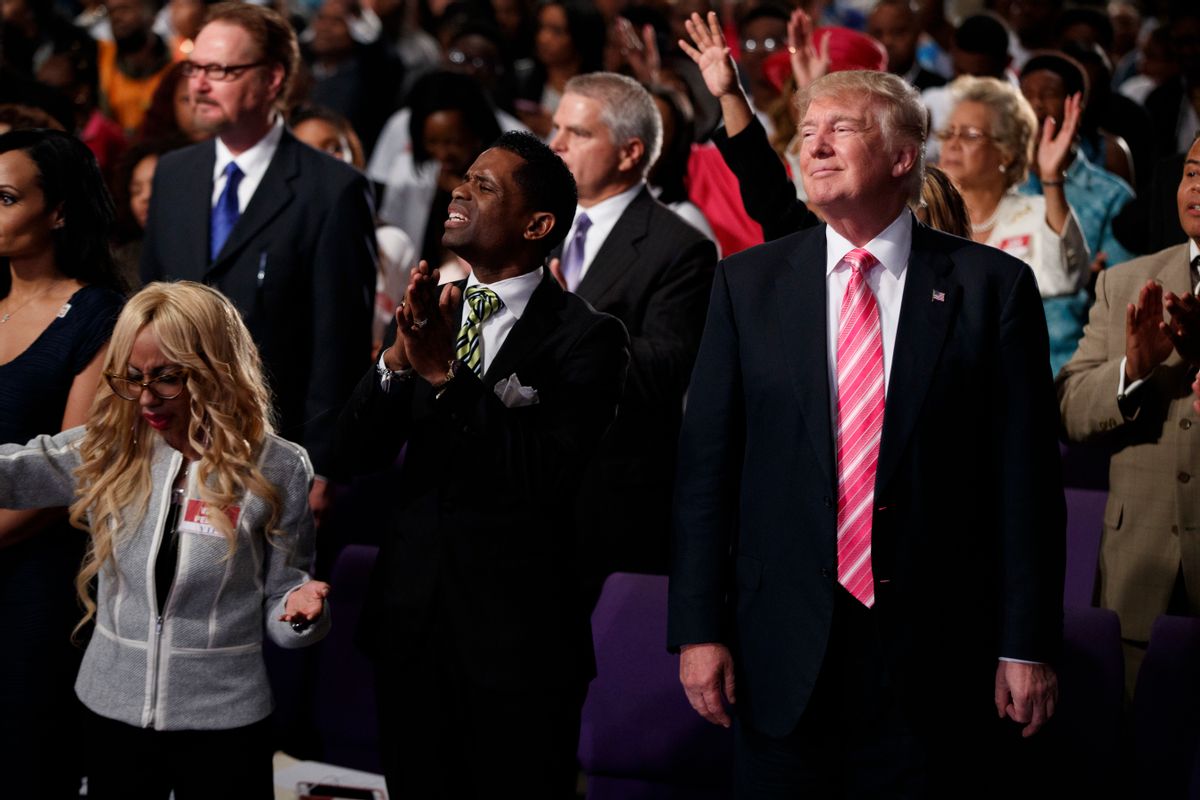 In an election season that has induced multiple waves of national nausea, perhaps the most vomitous incident took place during Donald Trump’s visit last weekend to the Great Faith Ministries church in Detroit. A surprisingly somber Trump offered a mawkish address to the congregants, full of phrases like “light of God” and climaxing with a bizarre recitation of words from what Trump calls his “favorite book”: the Bible. He signed off on the Scripture with his own endorsement: “so true.” A smart Bible publisher is already adding the Trump blurb to the book jacket.

Because the fun never ends, Bishop Wayne T. Jackson, the resident pastor, concluded the festivities by draping the maniac mogul turned presidential candidate turned televangelist with a “blessed” prayer shawl. Trump, the consummate showman, had to have the last word as he declared, “I feel better already.”

Jackson exhibited a strange, body-heaving laughter throughout the proceedings. The odd delight of a man whose home has a par 3 golf hole in his backyard anointing a man who owns multiple golf resorts brings to mind the cliché that ends with the words “all the way to the bank.” There does exist the even worse possibility that everyone involved was entirely sincere — that is, at least, as sincere as Omarosa Manigault, the reality television “star” whose pocketbook includes something called a “preacher’s license,” singing along to a hymn in the front row as if she were a contestant on "American Idol."

Nearly every four years Americans have to endure the misery of religious gesticulation and pandering as political ritual. There was a brief period of hope that America could escape the Christian invasion of its secular elections after the departure of prophet-President George W. Bush. Despite his own Christian beliefs, Barack Obama rarely has injected religious nonsense into political rhetoric, giving Americans a refreshing but brief reprieve from clerical imposition. The death of such hope demonstrates that miracles don’t happen, and some prayers are not answered.

Under the advisement of Manigault and Ben “I’m a Doctor, but I Don’t Believe in Evolution” Carson, Trump’s condescending attempt at “black outreach” to this point has focused entirely on the black church. The campaign now includes future "Celebrity Apprentice" competitors like Wayne Jackson and the reliably entertaining Pastor Mark Burns, who, before acquiring fame after touching the hem of Trump’s garment, boasted of a college degree he does not possess and service in the Army Reserve he did not perform.

Trump has now destroyed the one aspect of his candidacy that was healthy for his increasingly deranged political party — its lack of religious content and engagement — and cozied into the pews with an assortment of clergy con men and familiar faces of the religious right like Jerry Falwell Jr., who can’t wait for the world to end as long as gays, Muslims and promiscuous women suffer in the meantime.

The Democrats, who should present an alternative, did their best imitation of the Republican Party during the George W. Bush years — bringing up reverend after reverend at their own convention, beginning and ending each day in prayer and applauding when their candidate claims that the Bible is the biggest influence on her thinking.

The continual Christian interference in American politics simultaneously violates historical precedent and misses the point of the present. No matter how much the “Christers,” as Gore Vidal called them, like to argue otherwise, the United States of America is a secular republic. Its foundational documents vaguely reference a God figure but specifically prevent religious influence in public law, life and administration. Most of the Founding Fathers were not devout theists, and as Matthew Stewart makes clear in his excellent book, "Nature’s God," differed from Hillary Clinton and Donald Trump. The Bible was not their favorite book, and it did not have all that significant an impact on their thinking. They acquired more instruction and inspiration from Epicurus and French philosophers of the Enlightenment.

There is a burdensome part of the population that never much cared for the Enlightenment. But sociological trends indicate that the waters are parting and Americans soon might reach the promised land. Twenty-three percent of Americans have no religious affiliation. Even though atheists make up a mere 3 percent of the public, and agnostics do not fare much better at 5 percent, the “no affiliation” group is the fastest growing religious demographic in the country. Millennials are the Americans least likely to claim membership in an organized religion or to attend church services.

Anyone with an eye for marketing possibilities would encourage an ambitious politician to take advantage of the trend toward secular belief and practice. A major candidate should speak at an annual conference of the American Humanist Association, if only to assure its members that he or she would uphold the separation of church and state, honor the secular origins of the republic and govern according to the principles of reason and logic, regardless of personal faith.

Democratic presidential candidate John F. Kennedy did precisely that when he addressed the Houston Ministerial Association to comfort Protestants who had difficulty overcoming their anti-Catholic bigotry. Kennedy convinced many of those in attendance, as well as a majority of voters, that he would not take direction from the pope, but instead “on birth control, divorce, censorship, gambling or any other subject” he would “make his decision in accordance with the national interest, and without regard to outside religious pressure or dictates.”

Kennedy’s speech resonates in the present, long after anti-Catholic bias has eroded, because the notion of the “national interest without regard to religious pressure” is the substance of civilization. Societies progress when its leaders and people find motivation in science rather than superstition, medicine rather than magic and reason rather than religion. Those who doubt the essentiality of secular governance to freedom, justice and happiness should imagine themselves in an airport. They can board a plane for San Francisco, Karachi, Amsterdam or Kabul. Perhaps they could also think about time travel to American history when divorce was illegal, homosexuality was criminal, abortion was fatal and contraception was taboo. The national interest, implicit in Kennedy’s address, will often conflict with Vatican doctrine, or that of any other religious body.

The heavenly day when a candidate for president gives a similar speech to the American Humanist Association seems far off. But faith, as the Bible tell us, is “evidence of things unseen.”