Media and pundits don't know what Aleppo is, but they try to explain it to Gary Johnson

The New York Times and the ex-U.S. ambassador to Iraq falsely described Aleppo as an ISIS hub. It's not 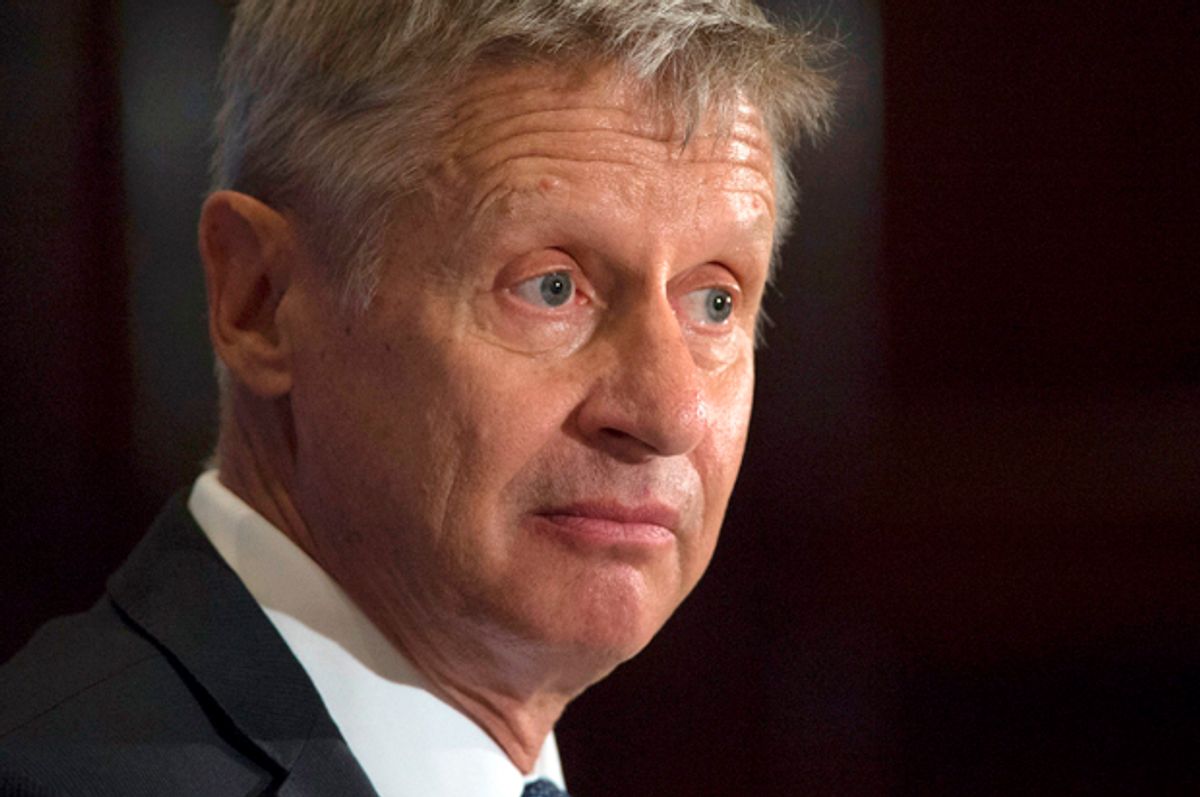 No one knows what Aleppo is, apparently.

“What is Aleppo?” the former Republican governor said, when asked about the embattled Syrian city.

Johnson was immediately taken to task for his ignorance. Yet the media and former U.S. diplomats trying to correct him did not do much better.

The U.S. newspaper of record and the former U.S. ambassador to Iraq falsely identified Aleppo as an ISIS hub.

In its report on Johnson's gaffe, The New York Times incorrectly described Aleppo as "the de facto capital" of ISIS. The actual de facto capital of ISIS is Raqqa, which is east of Aleppo.

Then in an update, Times reporter Alan Rappeport instead described Aleppo as "a stronghold of the Islamic State," before, in yet another correction, simply calling it a "war-torn Syrian city."

That's not all. When the Times updated an editor's note at the bottom of the article acknowledging the correction, it incorrectly described Aleppo as "the Syrian capital." Aleppo is not Syria's capital; Damascus is. Aleppo was the largest city in Syria before the destructive war began but not the capital.

Yet wait, there's more: After this third error was pointed out on social media, the Times issued a correction to its correction.

The website NewsDiffs, which monitors changes in news stories, showed there were five revisions to the Times story from 9:18 a.m. to 12:18 p.m. EST.

In its report, the Times noted that the phrase #WhatIsAleppo was trending on Twitter — but it was unable to answer the question itself.

After Johnson's blunder, a cocksure pundit also took to the media to try to correct him — and utterly failed as well.

Christopher Hill, the former U.S. ambassador to Iraq, went on MSNBC to set things straight, making a complete fool of himself in the process.

Hill arrogantly disparaged Johnson, while incorrectly describing Aleppo as the "capital of ISIS."

"I'm still trying to get my mind around that one," he said of the libertarian presidential candidate's ignorance. "You know, in foreign affairs there's a lot of inside baseball that I don't expect people to understand or follow."

"But the capital of ISIS — very much in the news, especially in the past two days, but for last two years. And for him to draw that kind of blank — and, by the way, boy was that a blank stare on his face. I was wondering if he was talking about something called 'an Aleppo,' and was confused by that. I couldn't figure it out. It was just mind-blowing," Hill continued patronizingly.

"I don't know where he will have peaked in the polls, but I think he will now be known as 'Aleppo Johnson,' and that may be the end of their bid," the former U.S. ambassador to Iraq concluded.

In August a rebel alliance led primarily by Syria's al-Qaeda affiliate, Jabhat al-Nusra (which has since rebranded itself as Jabhat Fatah al-Sham), broke the government's siege of the city.

The Pentagon opposes arming rebels in Aleppo, as most are linked to al-Qaeda and other extremist Salafi groups, but the CIA supports them.

ISIS does have influence in the Aleppo governorate — the most highly populated governorate in Syria before the war — but not in the city of Aleppo.

Media outlets and pundits insisted Johnson's gaffe may jeopardize his presidential run. Does this mean their utter ignorance of basic facts about the ongoing U.S.-backed war in Syria will jeopardize their jobs?

(Update, Sept. 10: This article originally included a tweet from Richard Grenell, former U.S. spokesperson at the U.N. and national security spokesman for Mitt Romney’s 2012 presidential campaign. Grenell's tweet — which read, "Everyone knows where Aleppo is....it's the city Obama ignores. #ISISgrowing" — appeared to imply that he thought ISIS was growing in Aleppo. Grenell subsequently told Salon, however, that the hashtag was "separate" and "in no way implies that ISIS controls Aleppo." He said he was rather blaming President Obama for a "failure to stop ISIS.")