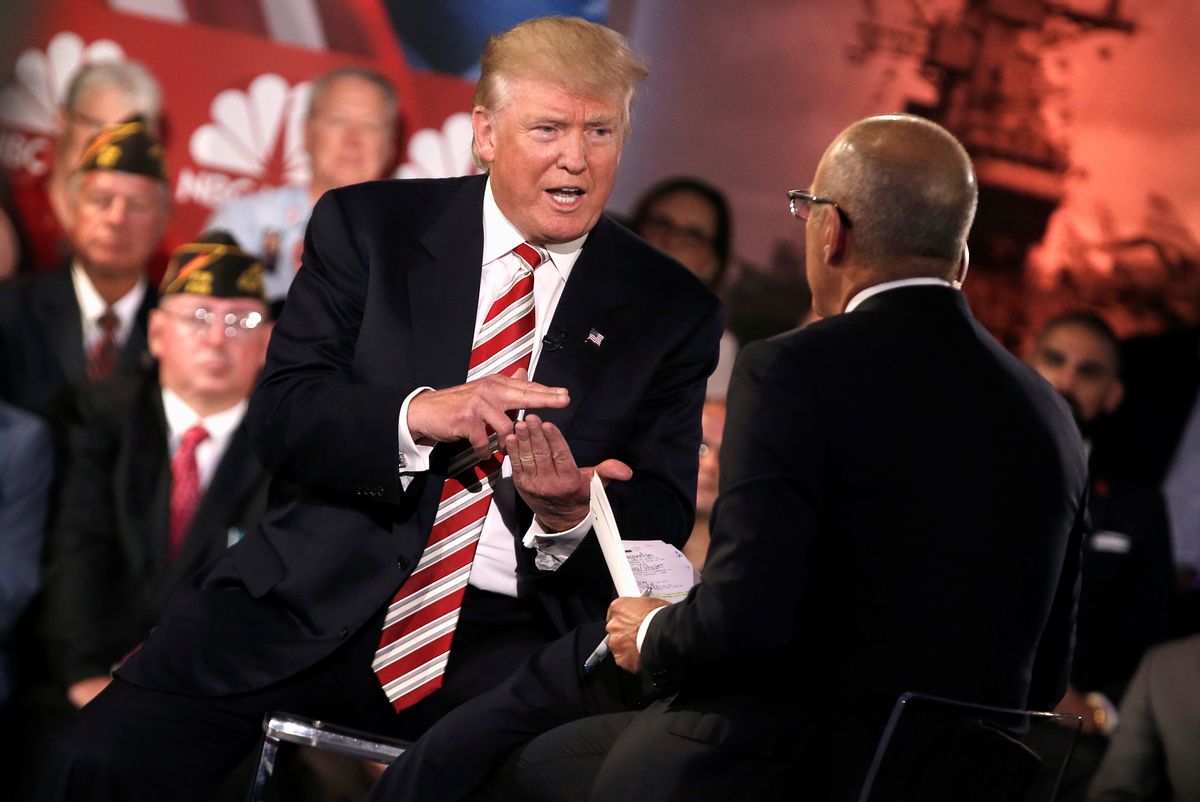 In anticipation of last night's "Commander in Chief" town hall forum on NBC the two presidential candidates this week engaged in a war of words over their respective qualifications. On Tuesday Democratic presidential nominee Hillary Clinton said that Donald Trump was "temperamentally unfit and totally unqualified to be president.” Trump, the Republican presidential nominee, responded on Wednesday morning with a speech in Philadelphia declaring Clinton "trigger happy and very unstable, whether we like it or not."

The Clinton campaign reacted with yet another ad featuring Trump's own words this time disparaging veterans and their families. The anti-Trump Priorities USA SuperPAC went even further with a new spot that shows Trump saying, "I love war." Trump's campaign manager Kellyanne Conway responded by saying the bizarre comment was taken out of context but the full quote, which he gave last November at a wild Fort Dodge, Iowa, rally (the same one where he called Ben Carson a child molester), is even worse than what it sounds like in the ad:

Trump has never been in the service, although he has said,"I always felt I was in the military” because of his education at a military-themed boarding school and he believes he has “more training militarily than a lot of the guys that go into the military.”

That comment "I'm good at war" says everything about Trump as he demonstrated last night at the town hall forum that he is indeed unfit to be president of the United States. There were many aspects of his performance that had people gasping at the mere idea of this man in a position of real power, not the least of which was his comment that President Barack Obama compares unfavorably to Russian President Vladimir Putin who "has an 85 percent approval rating" and is "very much a leader" because he has "strong control over his country."

But it was around the question of ISIS and the Middle East where he really showed his true colors. He was upset that Hillary Clinton had earlier claimed that he had lied when he said he had been against the Iraq War and defended himself by pointing to an Esquire magazine article from 2004 — which doesn't really help since the war began in the spring of 2003. The fact-checkers have declared his pants are on fire numerous times on this but he just keeps saying it.

Last night he also made a passing reference to someone "asking him about Iraq" 14 years ago, and you may be surprised to learn that at that same crazy Iowa rally he told the crowd that a delegation from the White House came to him to ask his opinion and he advised not to go in because it would destabilize the region. To the best of my knowledge this claim has never been validated. It's possible, of course, this was the Bush administration. But let's just say that it's as likely as Trump's witnessing thousands of New Jersey Muslims cheering after 9/11.

He said he told them:

You'll knock the hell out of one and the other one is going to come and take over the other. You don't have to be a genius to figure this out even though I am a genius.

And then he added:

And by the way, I'm more militaristic than anybody in this room. I'm going to make our military so strong, so powerful.

Everyone seems to think that Trump has "pivoted" from his position that he could not reveal his plan to defeat ISIS to his announcement today that he would give the generals 30 days from the inauguration to come up with one. But that's wrong. Trump's secret plan is not so secret. At that same rally last fall, Trump spoke about it plainly:

"I know more about ISIS than the generals do. Believe me. . . . I would bomb the shit out of 'em. . . . I’d blow up the pipes. I’d blow up the — I’d blow up every single inch. There would be nothing left. And you know what, you get Exxon to come in there and in two months — you ever see these guys how good they are? The great oil companies? They’ll rebuild that sucker brand-new. It’ll be beautiful. And I’d bring it, and I’d take the oil."

At the forum, he reiterated this belief that America should "take the oil" because he thinks this will make ISIS surrender and has taken to saying "to the victor goes the spoils" apparently unaware that this is a considered a war crime. He has said in the past it would require a permanent force to protect the oil but that it wouldn't take much.

Trump said that under Obama and Clinton's leadership "the generals have been reduced to rubble" and "reduced to a point where it’s embarrassing for our country." He sounded as if he planned to fire some of them, which isn't actually something the president can do. As he is wont to do he brought up his favorite,  General George Patton, saying that he's "spinning in his grave" over the state of affairs in the military. The good news is that he didn't bring up General Black Jack Pershing and endorse mass executions with bullets dipped in pigs' blood as he often does on the trail. He maintained that he still believes in his own plan for Iraq and says he won't necessarily follow the generals' advice.

So, the GOP nominee for commander in chief tells people that he's "good at war," "has had a lot of wars of his own" and "loves war in a certain way" despite never having been in the military. He also believes he's a "genius" who is "more militaristic" than anyone in the room. His plan to defeat ISIS is to blow up the Iraqi oil wells and have Exxon come in and rebuild them. And he believes that half the military leadership are fools and thinks he can just fire the ones he doesn't like.

But there's nothing delusional about any of that so there's no need to concern yourselves that the poll numbers are tightening.  If he happens to pull this off, what could go wrong?