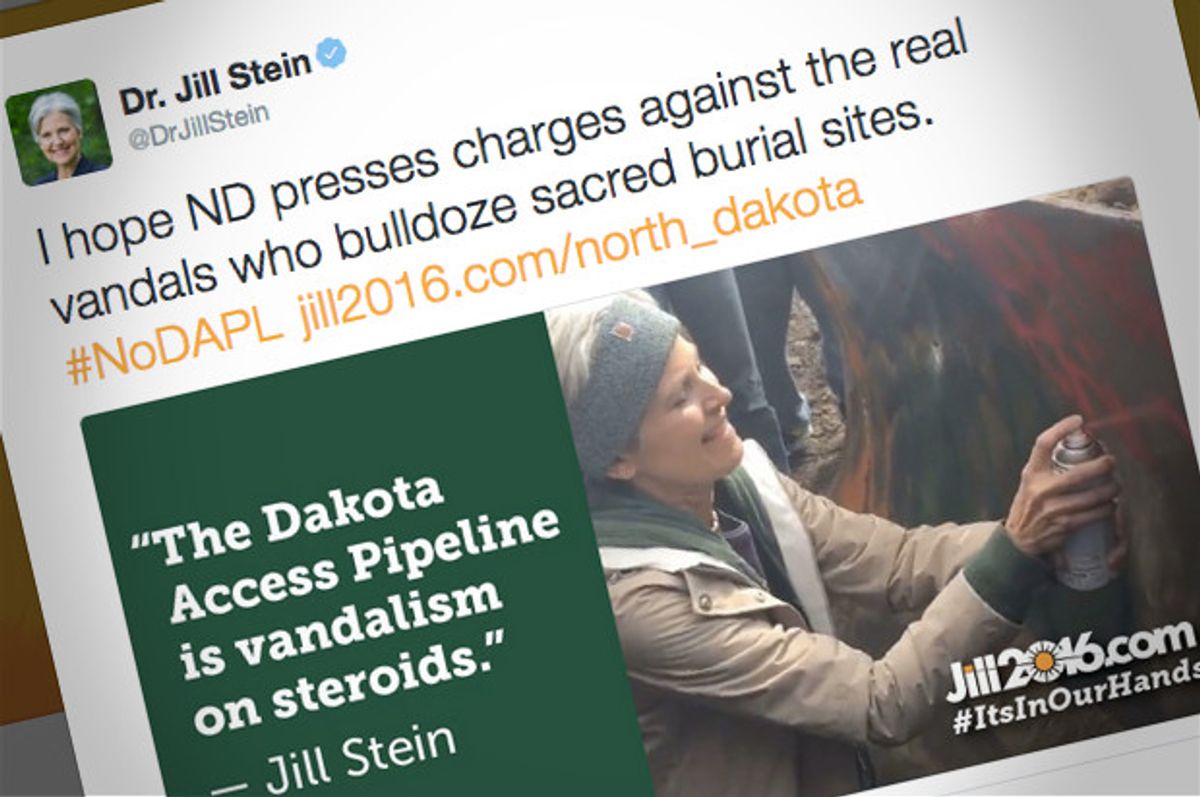 Green Party presidential candidate Jill Stein has faced obstacle after obstacle. First the Commission on Presidential Debates refused to let her participate in the presidential debates; now a warrant has been issued for her arrest.

The sheriff's department in Morton County, North Dakota announced on Wednesday that arrest warrants had been issued for Stein and her vice presidential candidate, Ajamu Baraka.

Both have been charged with criminal trespass and criminal mischief, class-B misdemeanors, after participating in protests against the Dakota Access Pipeline.

For weeks, the Standing Rock Sioux tribe has led demonstrations against the massive oil pipeline, which will span at least 1,168 miles, from North Dakota to Illinois. Residents say the $3.7 billion project will contaminate their water and land.

The same day the arrest warrants were issued for the Green Party candidates, a federal judge granted part of the tribe's emergency request to halt construction of a section of the oil pipeline.

In July, NPR reported, the tribe filed a lawsuit arguing that, when the U.S. Army Corps of Engineers authorized the Dallas-based company Energy Transfer Partners to build the pipeline, it did not follow proper procedures.

The Army Corps replied saying it "does not oppose" the tribe's motions for a temporary restraining order.

Activists from movements around the country, such as Black Lives Matter, have sent contingents to stand in solidarity with the tribe.

Stein and Baraka joined the protests this week. On Tuesday night, the Morton County sheriff's department posted a photo of Stein to Facebook, accusing her of "vandalizing Dakota Access Pipeline equipment." It said authorities were investigating the protest, which it called a "criminal act."

The Green Party candidates are standing by their protest.

"The Dakota Access Pipeline is vandalism on steroids," Stein tweeted.

"I hope the North Dakota authorities press charges against the real vandalism taking place at the Standing Rock Sioux reservation: the bulldozing of sacred burial sites and the unleashing of vicious attack dogs," she added in a statement.

Ajamu Baraka, a longtime human rights activist, accused the authorities of double standards. "ND pipeline that threatens water supply for millions, attack dogs that bite peaceful protestors and the state charges me and Jill," he tweeted.

"It's during these times of resistance when we are witness to who is truly being protected and served," Baraka added.

It's during these times of resistance when we are witness to who is truly being protected and served. #NoDAPL pic.twitter.com/8vize12NJA

Major news networks have paid little attention to the ongoing protests against the oil pipeline.

"I hope they take action against the Dakota Access Pipeline company that is endangering drinking water not only for the Standing Rock Sioux, but for millions of people downstream of the reservation who depend on the Missouri River," Stein said in the statement.

"The pipeline will carry up to 570,000 barrels of highly polluting Bakken crude oil per day. This would be another deadly blow to a climate teetering on the brink. It cannot be allowed to go forward," she added.

Stein stressed, "Our campaign supports the courageous Indigenous leaders who are taking a stand to protect future generations from the deadly greed of the fossil fuel industry. We approve of their vision and courage."

She concluded with jabs at her opponents: "Donald Trump, on the other hand, will support the pillage of the planet as his energy advisor's company intends to run oil through the destructive pipeline; and Hillary Clinton's silence on the Dakota Access Pipeline represents tacit approval of the continued assault on Mother Earth."

Critics on social media pointed out that Hillary Clinton, the Democratic presidential candidate, mishandled classified information but was not indicted by the FBI; yet Stein was charged with a misdemeanor for partaking in an act of civil disobedience in solidarity with indigenous Americans.

This is not Stein's first with encounter the authorities. She was also arrested in Texas in 2012, during her previous presidential campaign, for another protest against another oil pipeline. Police charged her with trespassing for trying to take food to activists trying to stop the Keystone XL pipeline.